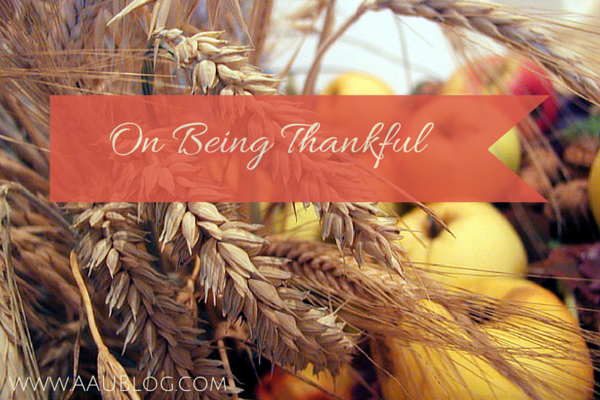 “Silent gratitude isn’t much use to anyone”

With thanksgiving tomorrow, though I’m not American, I think it is so important to remember to be thankful.

To say thank you.

I have some family in America so I can use that as an excuse to eat copious amounts of pie tomorrow, right?

Some of you may know that I work two evenings a week as a manager in retail. Part and parcel of the job is being polite and thanking customers, for their custom and let’s face it, for their money. Though quite often I find that I’m thanking people after they’ve been rude to me and even more often, I’m finding that I’m not being thanked. Some people may say that it is my job so I don’t really need to be thanked, but I think saying thank you is everyday etiquette, a simply courtesy that takes just a moment. It costs nothing, not even effort. It is a phrase that is pretty commonplace but it’s never unwelcome, and it can mean so much.

Why is it that saying thank you is so important (to me anyway) 😉 ? Why do we feel so hurt and let down when someone doesn’t thank us? Isn’t it just an empty ritual? A reflex almost?

I think that ‘thank you’ has something truly magic about it. Like sorry, it is just words, but they act as shorthand for so much more. Thank you shows our appreciation and gets across our gratitude. But even more than that, it is a sign of respect to the person who has helped you. It is an indicator that you do not take them for granted, and basically an acknowledgement that they matter. There is so much negativity in this world that a simple thank you can have far reaching positive affects.

Just like people all over the US in a few days will be giving thanks for the country they live in, the history they have and the harvest, so should we. Everyday.

Do you celebrate Thanksgiving? It is something that I want to instil in my children – being grateful is so important.