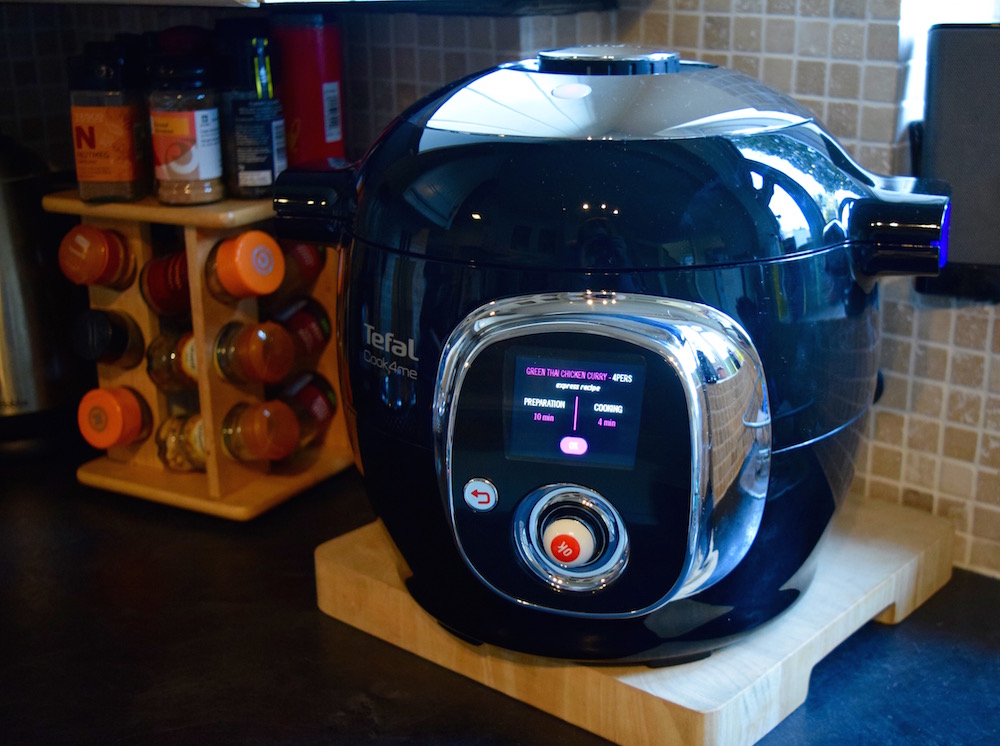 A couple of weeks ago I was invited along to the Ideal Home Show by Tefal. I was invited along to go and learn about their new Cook4Me appliance. I was given a demonstration and then offered the chance to try it out for myself. I do love to cook but am often short on time, so it sounded like a great solution to try out. Cooking a curry in 4 minutes? I’m there….

Here it is in all it’s glory. The box is larger than the appliance so it doesn’t take up as much room on the worktop as I thought it would. The rep at the Home Show said that she thinks it looks like an astronaut’s helmet. I’ve got to say, I personally think it is more like Shrek, and that is what it has become affectionately known in our home, particularly with our four year old! 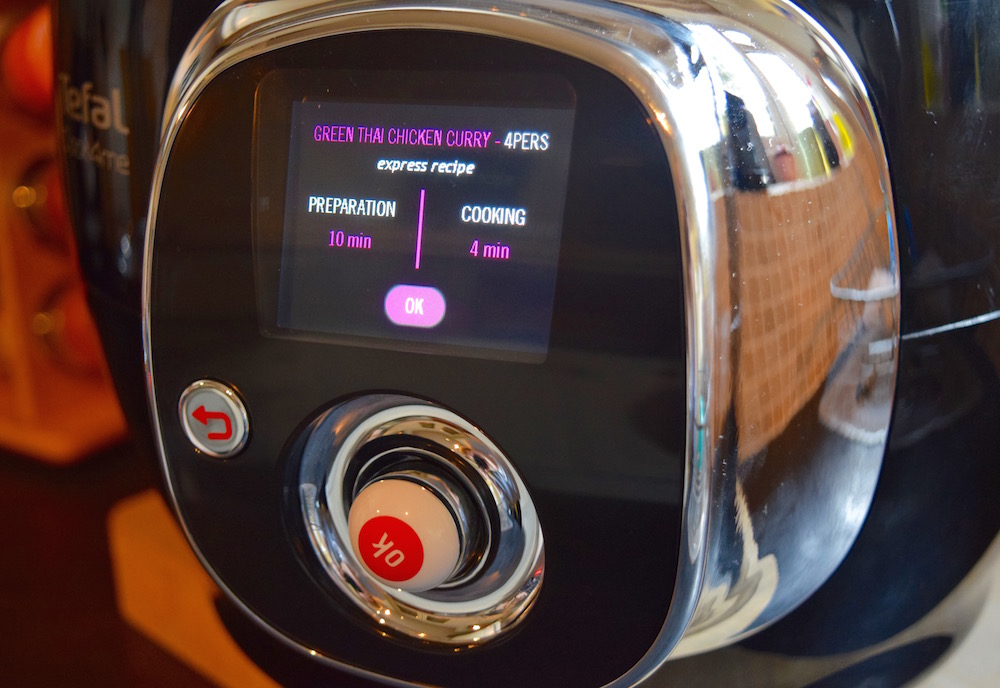 It is plugged in and then all operated by this dial. You can select the pre-programmed recipes (of which there are 50 at the moment). The recipes include starters, main dishes and desserts. I was told at the show that there is an update with more recipes coming out and you can also look up any pressure cooker recipes online. Those recipes would work well in it too. There was plenty for me to be trying out in the preprogrammed recipes, though. So far we have tried out the tikka masala, lentil and bacon soup, bacon and leek risotto, butternut squash risotto and the green thai curry. 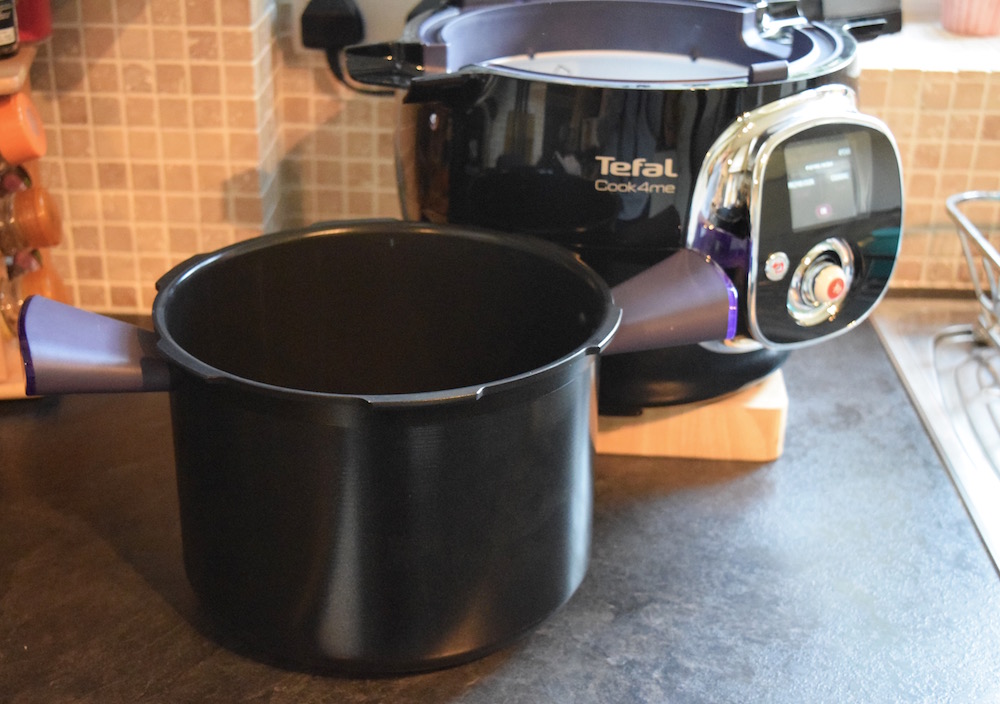 The pan comes out of the ‘pod’ and this is the only thing that needs to be washed (though the pod might need a wipe down now and then). It is non-stick and super easy to clean. As well as the programmed recipes you could just use it in addition to your hob. You can set the cook4me to manual and it will just heat like a pan. Perfect if you need more pan space for a special occasion or are cooking for a lot of people.

The pan is large too so you can cook in bulk and freeze if needed. I tended to make the recipes for 6 people (you can choose from 2, 4 or 6 people and then it tells you the quantities needed). Then we would have about half leftover to have the next day or pop in the freezer.

It has made doing the food shop very easy. Anyone that knows me, knows that I like to meal plan. I have just sat down with the recipe booklet and written down my ingredients. It has the made the process so much quicker for me. The recipes are all simple and don’t require any odd or unusual ingredients. The ones we have tasted so far have all been mega tasty too!

The Green Thai Curry recipe is what I’m sharing it you today. The ingredients are: 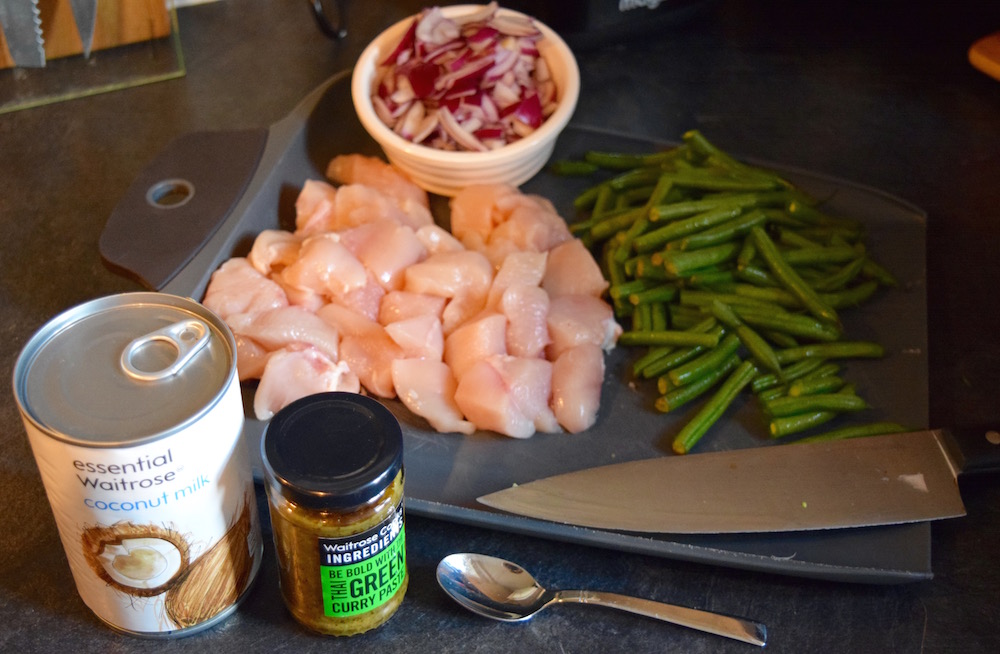 I prepped all of the ingredients so it is ready to go. It all happens quickly so everything needs to be measured out and ready to go. You just click through on the programme screen and it takes you through every step of the way. I found it ridiculously easy. For the onions and chicken, you do need to stir it, but due to the heat of the pan, it doesn’t take long. Maybe one day there will be an invention that cooks and stirs for you 😉 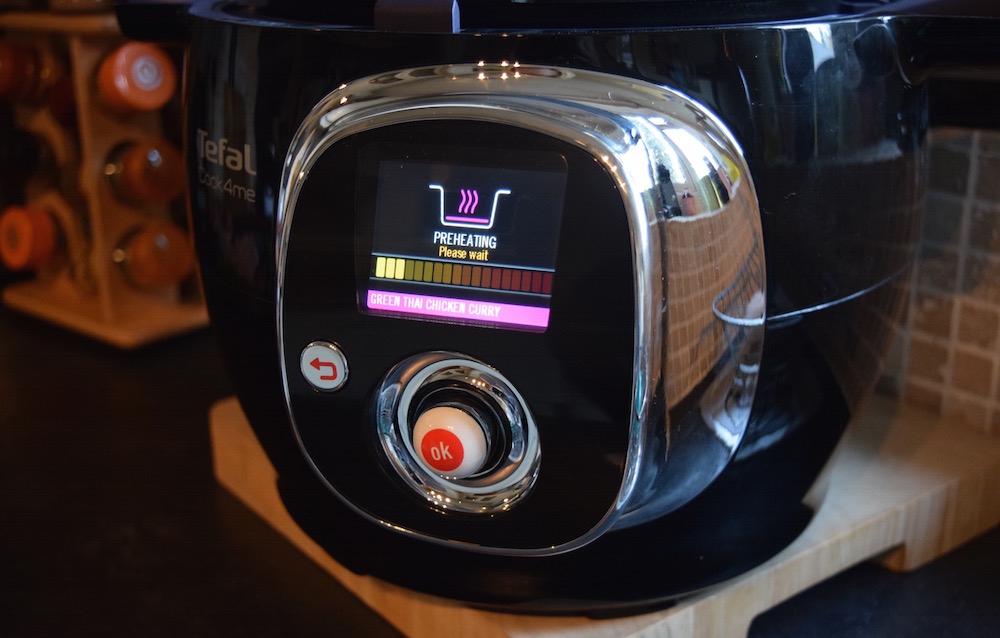 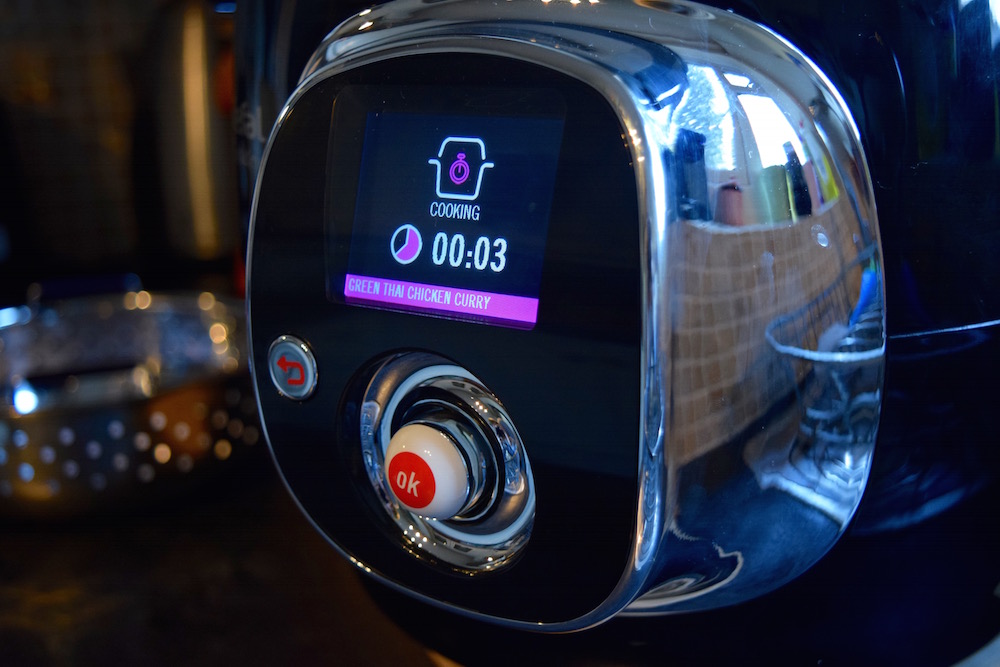 Then literally minutes later it was all cooked. It tells you when to close the lid and leave it to do it’s thing. It really is fool proof! I did find the sauce of the green Thai curry a little runny, so I would use coconut cream next time to thicken it up a little. 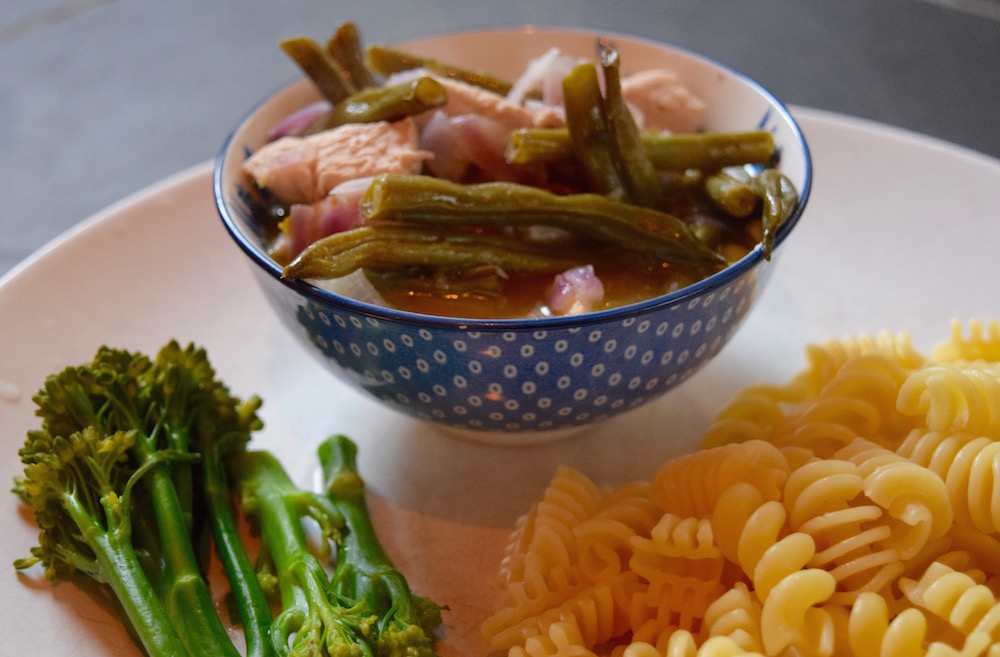 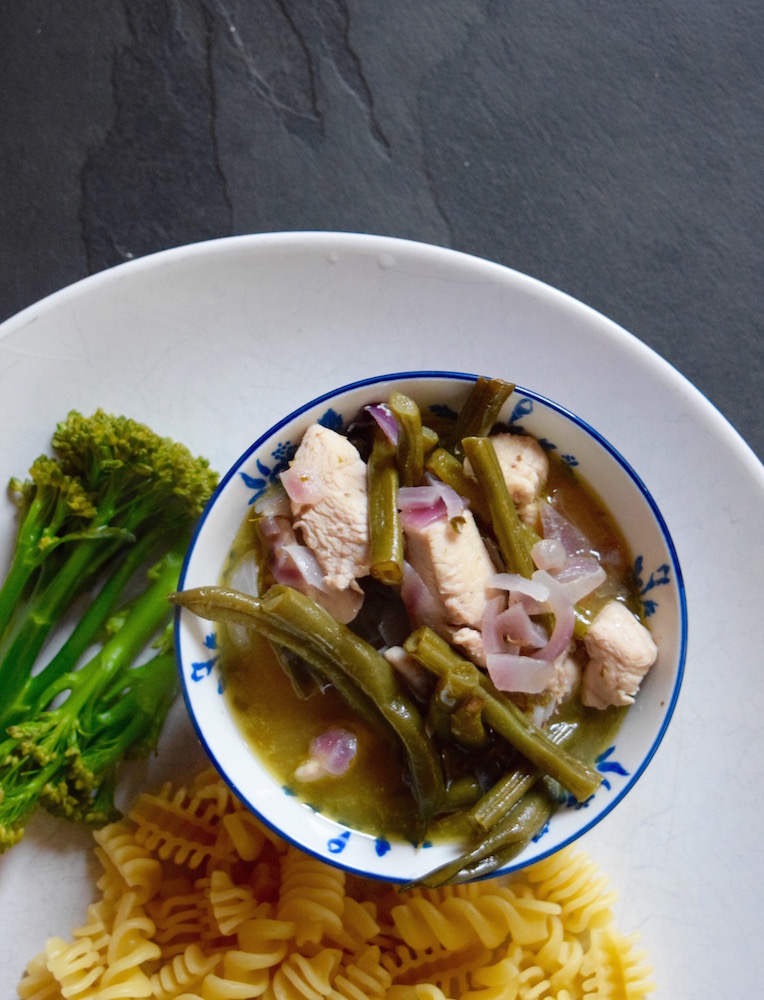 I have had no problems with any of the other recipes, though. What i have loved cooking the most is the risottos. I love the dish but as it is rice, I usually mess it up. Plus, risotto recipes take quite a while. There is a lot of stirring and waiting involved – a basic risotto recipe takes about 45 minutes altogether. This one takes 10 and they’ve come out perfectly. So tasty!

I like that you can set the cook4me to start cooking at different times. Just set it to come on at different times which is perfect on days when we are out in the afternoon. When Max has tennis I have set it before we leave so that it starts to cook as we are heading home. They are always ready to eat as soon as we get in and it is amazing to just have it ready. it reheats and keeps the food warm for you for a while too. So you can cook it when you have 10 minutes spare and then it is ready for later.

The cook4me costs around £249, but I have seen it cheaper at different retailers. I have loved cooking with it and found it very convenient. I do think that it is a lot of money, though. I would recommend it, but in my opinion, I would get it when you can find it on a special offer or something. I think I would pay under £200 for it. If you are a busy working parent and aren’t at home too much each day, then I think it would be perfect for you. Or if you aren’t a big fan of being in the kitchen cooking, it makes the food shop and cooking process much, much easier.

What do you think to the #cook4me?

*the cook4me was gifted in exchange for an honest review. All thoughts are my own.