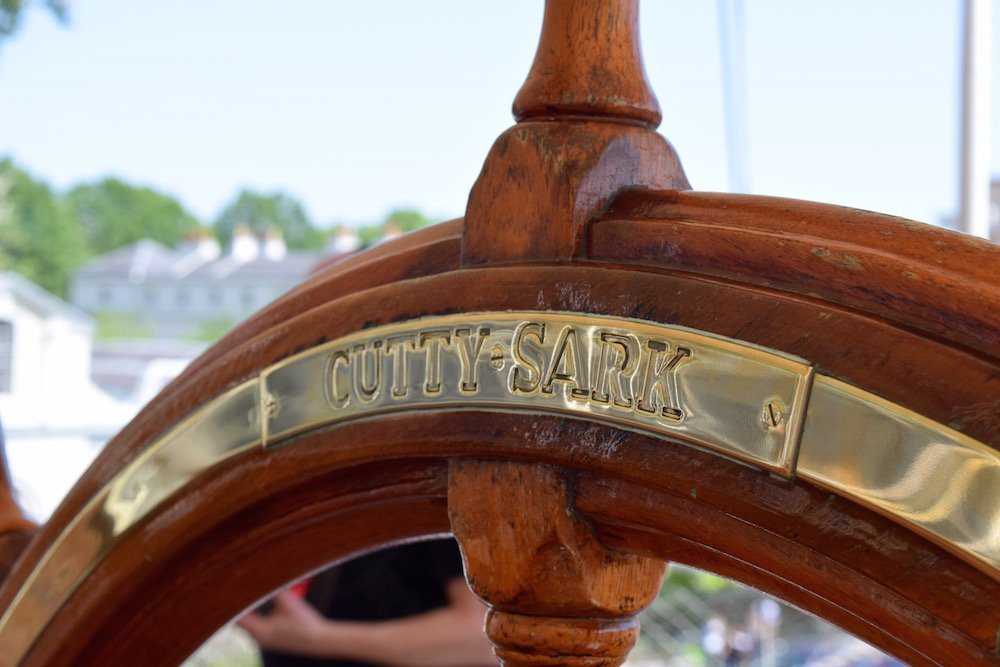 If you like all things cream tea and classically British, then you may have already known National Cream Tea Day that happened just a couple of days ago on 28th June. Is there a better day on the calendar?!

When you think about cream tea, the natural thing to think about, at least for me, is tea. So what better way to spend National Cream Tea than enjoying cream tea right underneath the Cutty Sark, and discovering all about its roots to tea. In its day, it was one of the fastest ships of its time, being built in 1869, and it brought tons and tons of tea over from China, right into London, challenging the best tea clippers on the China tea run.

To start off with, I love the location of the Cutty Sark. It is right by the River Thames in Greenwich, and is so striking. It is a minutes walk from the DLR station, and right next to where you can get a river boat across from London Bridge. As the Cutty Sark is on a raised platform, it really stands out, and you can see the ship in all of its glory, with the sails all up; it looks amazing. You can get to see some the gorge London skyline too; the location is great.

I was really looking forward to exploring the ship, and then having the cream tea right under the ship, it all looked amazing.

On Board The Cutty Sark

We were greeted by a tour guide who was ready to show us around and give us a breakdown of some of the history of the ship. I have been to Cutty Sark with my kids before, but there was definitely less time for looking up the history in those circumstances; it is more about the fun and hands-on experiences. So to learn more about it was really enjoyable; the ship has quite the history (there are audio guides that you can use as you go around the ship too, so you can learn about it all too).

On board the ship you can get a taste of life as it is on the ocean waves, including things like taking the ship’s wheel, and what the practicalities of being out on a ship for weeks on end could look like. Some of the ship has been restored after a fire, but there are some original features still there.

There are cabins that you can explore, the hold in the ship, the deck, and then around the bottom of the ship, you can see the world’s largest collection of Merchant Navy figureheads (the statues that are used at the front of the ship). When you think that the display is made up of figureheads that were just found on the beach, then it is really impressive.

The history is really varied. I had no idea that the ship was then used for bringing wool back from Australia, after its time as being used to bring tea back from China. It was also interesting to hear that the ship still came first in a race back from China, because even though the ship came back thirteen days after the other, because they repaired the steering en route, then everyone was impressed with their effort.

Afternoon tea is just perfect for any occasion. And in this setting, it is a great way to relax and enjoy the great British tradition. The setting really is in a completely unique setting, of being underneath the hull of the ship while you have the cream tea.

The range of sandwiches and cakes was brilliant, with everything from cheese, egg, salmon, and cucumber sandwiches, to brownies, macarons, lemon cake, and millionaire’s shortbread. It all tasted great, and would really recommend it. I think the only thing that I would want improved was the range of tea available; there was only one option of English breakfast tea.

Although I spent the afternoon with other bloggers, bringing children to the Cutty Sark is ideal day out if you are looking for a fun day out. There are so many hands-on things that they can enjoy and explore, from taking the helm at the ship’s wheel, climbing into the crew’s bunk beds, meeting characters, a family trail, and puzzles and games along the way. There is even a seat that moves up and down to help little ones learn what it would have been like to be at sea back in the day; I’m very impressed about all that is on offer for families at Cutty Sark.

Have you ever been before? It would be great to hear what you think! I could definitely recommend a day out at the Cutty Sark, and of course, the cream tea.

*this is a collaborative post. All opinions are my own.