I have seen a lot of posts recently about how ‘fake’ some people are on their social media accounts, particularly Instagram. The general consensus being that if people see your *insert perfectly tidy / decorated home / homemade baking or gifts / beautifully coiffed hair / beautifully styled children / amazing abs / all of the above* that you can make people feel bad and that shouldn’t happen because, it isn’t your real life.

While I do agree that some things may be staged to give off some kind of image or sell a certain thing, not everything or everyone is!

We all have our strengths and weaknesses and I get it, at times when we’re having a bad day, you don’t think its fair for someone else to be baking bread from scratch when I’ve barely taken a shower that day. I guess we all just want to know that we’re not alone and that other women and parents don’t have everything all together either. The thing is though, because we all have strengths and weaknesses, some more evident through photos than others, there’s always going to be someone who does something better than we do. 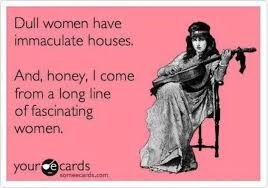 Some people really do have a home as beautiful and tidy as it is on Instagram. I for one, though I wouldn’t describe my home as beautiful, am really OCD and like things to be clean and tidy ALL the time. So if you see a picture of my home and think that I’ve just staged it, ask anyone that has been to my home – it definitely hasn’t been. A messy home kind of stresses me out. Of course we still let the kids play and get toys out, but we just tidy things up through the day. Sometimes I get the feeling that people think I’m less ‘real’ or my ‘poor kid’s don’t play properly. Does having a tidy house make me less interesting or even, a worse mother? Should a messy house mean happy kids? I’m pretty sure I have happy kids…

Like I have said, we all have strengths and weaknesses and as such, we prioritise things like that for ourselves. A priority for me is a clean and tidy home. I love cooking from scratch too as for me, that is a priority. Crafts in particular (and good abs) 😉 is less of a priority for me right now because basically, I’m rubbish at them! But I don’t think badly of those women who do have those things as a priority / those sills. 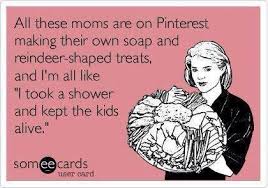 I have friends with all ranges of skills and I see blogging pals with a huge range of skills too. Some have perfectly cooked meals and have their kids eating kale and quinoa. Other friends I see making homemade soaps and candles, others are just hilarious and fabulous people to be around. One friend of mine in particular always looks amazing and has the best style. They’re all mums and it doesn’t mean that they are less of a mum because it is different to the thing that I’m good at. I can organise and clean like nobody’s business but ask me to make a homemade birthday card and you’ll think my one year old did it, blindfolded!

We’re all doing the best that we can, excelling (and equally being really rubbish) at a variety of things. We all have good things in our life and struggles in our life. Just because those kinds of things can’t be caught on camera, doesn’t mean they’re not there. We’re all good mums!