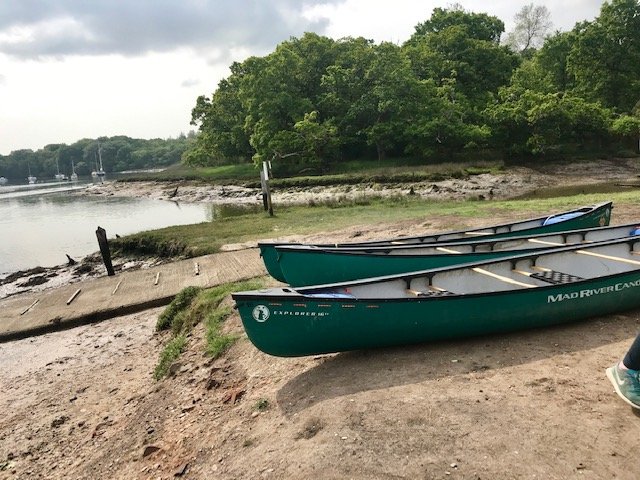 Last weekend we had a little trip down to Dorset and Hampshire, as we had a day to explore the south coast, and then the second day to have an adventure day in the New Forest. I don’t know why we don’t head down there more often as it is less than two hours away from us, so easily done in a weekend, or even in a day. And it is such a stunning part of the UK, with plenty to see and do; have you ever been?

One of the reasons for our trip was to have a family adventure day with New Forest Activities. If you are looking for something a little different to do in The New Forest, rather than just walking and hiking, then look no further; New Forest Activities are experts in a variety of different experiences, in and out of the water, from kayaking to paint balling, so you can experience different aspects of the lovely New Forest. We had a the family adventure day, which included bike hire, to cycle around the forest, as well as canoeing along the river, with a guide.

The day started with going to the office and bike hire on the Beaulieu High Street, to have a chat, get all booked in, and then get all the kit for the bikes (helmets and so on). They have a large range, and have tow-along bikes etc for little ones that aren’t able to ride by themselves, as that was something I was worried about – they can both ride a bike, but probably not for all day and out on roads. It was handy to not have to take anything with you, other than what you needed for the day. Then it was onwards to the activity centre to the get sorted out for our canoeing trip.

We had a briefing before we left the base, and got fitted with life jackets and got our paddles. There was somewhere to lock up belongings if needed, as well as toilets and a little honesty kitchen for drinks and so on, that you can just leave some money for.

I know I haven’t done any canoeing before, especially with the kids in tow, so it was really nice to know what we had an instructor with us, in a separate canoe, to show us the ropes and make sure that we were kept safe (we all had life jackets too). She was really friendly and gave us a few challenges to try new things too. Having said all of that, it was super chilled and we could work at our own pace for the ninety minutes that we were out on the water.

It was a lot of fun, as well as being a little challenge, and it was fun to see the kids getting involved with the rowing of the canoe. There were quite a fe crabs that we saw in the water, as well as thousands and thousands of small moon jellyfish (that don’t harm). This was an extra element to it, as the kids liked being so ‘up close’ to the jellyfish. You could even ‘catch’ some to look at a little closer, before putting back. Really cool.

I think that my children, ages 7 and 5, are great ages for this kind of thing. You could take them younger, but I’m not sure I would have coped with them not wanting to fling themselves into the water!

I would recommend this family adventure day, as you can take things at your own pace, have lots of fun, be active, and enjoy the great outdoors.

Prices start from £25 per adult, and £25 per child (under 16 years of age). £100 for a family of four may be a little steep for some, but for a full day’s activity, does mean that you get something for your money. It would be good to have another element added in too, I think, rather than just the biking and canoeing; something like archery would be cool as well, just to make you feel like you get complete value for money.

Have you been to The New Forest before? It would be great to hear what you think.

*this is a collaborative post – but all opinions are our own.