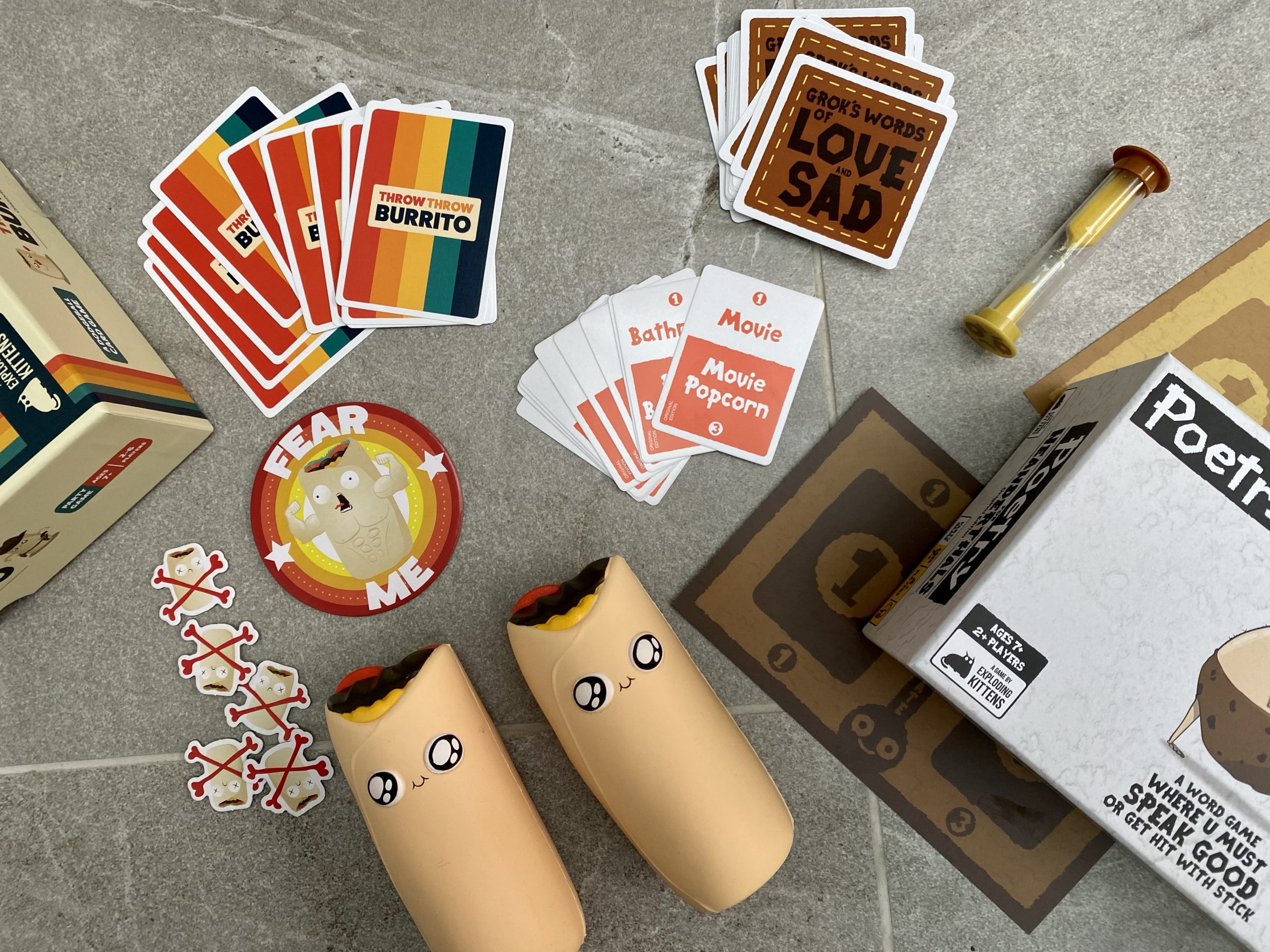 Bored in the house, and in the house bored? We’re back at it; homeschooling, working, and never leaving the house. It feels a little bit different this time around, with the school be a little more ‘hands on,’ but it is still such a juggle. I feel like I’m constantly logging us all in and out of Zoom meetings!

Our school has been great, though, and they are so keen to emphasis that it is all about health and happiness. They are stressing with the children that we should be attempting some kind of PE each day, a walk outside, and taking lots of breaks, so keep them healthy and happy. If you’re concerned about screen time (no judging, we’ve got to do what we’ve got to do), then playing some games together on breaks or on evenings, is a really fun thing to do. In all honesty, I think my children are getting fed up of watching another movie after dinner.

The makers of Exploding Kittens, a really fun game for the family, have a huge range of other games that would all work in this lockdown. We have been lucky to be trying them out, and we honestly couldn’t recommend them enough. They are quirky, but I think the unique angles they take make them really stand out, and make them a lot of fun for kids to play. There are no other games out there like them!

The majority of the games are suitable for ages 7 and over, and for a few players in each game, although this varies slightly from game to game. There is a really cool feature where they share a link to watch the video in the instructions, which is helpful, because there are a few different elements to the majority of the games. Seeing how a game should be played is very helpful. There are written instructions to follow, though, but sometimes you just have to get started playing and see how things go – we got how they all worked quickly.

Favourite Games from the Range

Throw Throw Burrito is one that my children ask to play all the time since we got it! It is described as a dodgeball-style card game – clear as mud, right? Jokes aside, it is a lot of fun. You are trying to find sets of matching cards, and this element is quite fast-paced. But there are some duel and battle cards that you can match up, and if you have a set of three and show them, then that is where the burritos come in.

The first person to get ‘hit’ (don’t worry, it’s very squidgy) loses the round. You go through a few rounds, and if you’re the winner, then you are the proud owner of the ‘fear me’ badge. With my two children, they were very proud of getting this title!

As you can see, it is a lot of fun to play, and something really different when you need a break from homeschooling.

One of our second favourites that we have loved to play is Poetry for Neanderthals. It is honestly so funny, and a game that you can dip in and out of, as it is less of a formal card game. In teams of two, you have to describe words or phrases using only one-syllable words. It is honestly much trickier than you would think! If you or someone on the opposite team says a word that is longer than one syllable, then you can get a link on the head with the inflatable cave man style club! This is an element that the children have found so funny, and because you have to learn about syllables, it can totally class as homeschool too!

The third one that has made it to our top three is On a Scale of One to T-Rex. If you have any budding actors, then this is a really fun choice. It is like charades but on a whole different level!

The game works by choosing a card with an action, and then choosing a number. The number is from one to ten, and then you have to act out what is on your card, with the level of drama that your number card suggests. For something as a ten, it would be the most enthusiastic or dramatic version of what you are trying to do. For a one or a two, it would be really half-hearted and a lame attempt.

The other people do it at the same time, and you have to think if anyone is doing their acting on the same scale or number as you. The more that you can judge what others are doing, and if it is the same as you, then the more that you will win. The actions are all pretty silly too, so it is a lot of fun.

Have you heard of these games before? It would be great to hear what you think.

*this is a collaborative post, however, all words and opinions are my own. The post also contains affiliate links – read more about that over on my disclosure page.