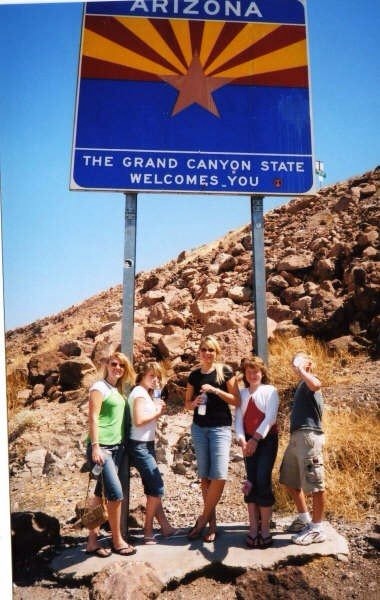 There was a phase in time that we would visit the US every summer. From the time I was 13 until I was 18, so circa 2000 – 2005. The first time I went, I was 13 and it was just my older sister and I. We flew all the way to stay with friends in Salt Lake, even managing a changeover in Atlanta.

I remember that someone was meant to come and guide us through the airport in Georgia. They didn’t.

We got the the train and navigated to a concourse all by ourselves. When we flew home we were all ‘we got this’ and then someone did actually guide us through the airport that time. We were fully on one of those little carts that beeps as it moves through the airport. Cringe. So not cool to 13 year old me.

Other times, the whole family would come out. Not usually for the whole summer but for a couple of weeks. We grew up with a lot of Americans (my home town also had a US military base so there were several Americans that attended the same church as us), so we had some solid friendships that meant there was someone for all of the family to hang out with. One of the times that the whole family came out to visit, we did an epic road trip to see lots of classic ‘American’ things. The first of which involved a trip south from Utah, to Arizona. Stopping off at various national parks and canyons in southern Utah and then of course, hitting up the Grand Canyon.

I remember it being so hot. And so huge. It really is epic. A must see for everyone at least once in life I think.

I know some things will have changed since I visited last, but I thought I’d share just two little tips to help you get the most out of visiting the Grand Canyon:

The best way to avoid the crowds (and the heat) is if you went after mid-September until January / February time. It is still super warm, just not as extreme. We visited in August and it was really hot. Look at all of those bottles of water we have! It tends to be slower in terms of tourists then too.

Consider taking a tour of the canyon. There are a lot of tour operators to choose from and a lot of choice too. Some tours involve helicopters, some buses. Just check which route they take and what you will see. Generally, if I recall, the south rim has the most spectacular views. It is worth getting down below the rim to have a little hike though, too.

Hope this is helpful to you. Are you planning to go? Have you ever been? I’d love to hear about your trip!