The husband’s alarm is usually the first sound in our house on a morning. (I’m lucky in that Max is usually pretty good and usually wakes up at a reasonable hour, so I have some time to enter the land of the living). One Friday morning his alarm didn’t go off. I woke up naturally and jumped up to see what time it was. I hate that feeling of thinking you overslept. Freaking out that Mike had missed his train, I woke him in a panic.

He hadn’t missed his train. He had planned it all along. He had booked off a random day off work so we could all do something we have both wanted to for ages. If only he had told me about it I would have left him to sleep longer. Oh well…

We were up and ready pretty early and off to Hampton Court we went. We have been in the grounds and gardens before but have never been able to justify the £16 price (per person!) to actually go inside before. Mike had found 2 for 1 tickets so it was much more reasonable for us and just happened to be a miserably rainy day so a good job we had done the gardens before!

The gardens have a big maze and they are really beautiful ‘British’ gardens so if that is something that you want to include in your trip, stick to a nice spring or summer day.

As it was a Friday, it was really quiet other than a few school groups. (Side note – Primary school children are so LOUD! Max would be nearly off for a nap in the pushchair and then a school group would walk past. Can’t really complain though as they were only in certain areas). 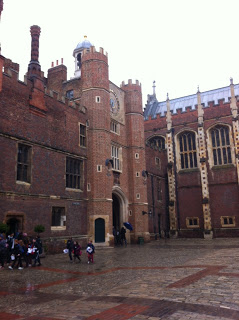 Because of the school groups there were people dressed up as King Henry VIII and his wives, court jesters etc so that was fun. Max loved it. One thing that did surprise me is that they had a family room with a soft play area which was great when Max needed time to just run around for a bit as the rest of the Palace isn’t exactly child friendly. There were areas to eat a picnic lunch too so it is suited to families but only really in certain areas. The rest of the clientèle were of the older variety and seemed amused that we had brought a toddler with us – its free for them so why not?? 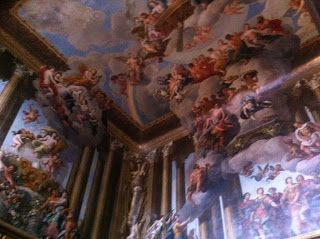 I can be a bit of a history geek and I love anything to do with the Tudor & Stuart times (think Hever Castle, The Other Bolyn Girl etc) so I really enjoyed seeing the palace and learning about how they lived, what they wore, things they did, what they ate, basically everything. They even had some genuine paintings that had been transported over from Rome that were originals from the 1500’s – so brilliant.
I would definitely recommend going but even as someone that likes history there is one thing that I would recommend even more; going when there is a 2 for 1 offer on tickets!