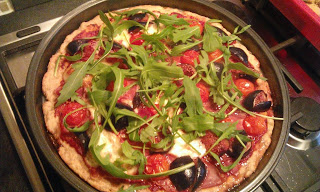 Having a bit of a health kick at the moment and a husband that doesn’t really need to (or won’t to) watch his calorie intake, I have been needing to think of some foods that we can both eat. Having to prepare two different meals can be very annoying (not to mention costly and time-wasting) so I recently found a recipe that is a healthy amount of calories, for me, but isn’t short on taste, for him. Pizza! The name might deceive you but if you make the base and know what goes in and on it, then you can make it as healthy or not, as you want.
Don’t let making your own dough put you off – it really is simple. Give it a go and then you’ll be wondering why you haven’t been making your own dough all along.
All you need to do to is:
– Measure out 250g bread flour into a bowl (I used wholemeal flour) and mix it with 1 tsp of salt and 1/2 tsp fast-action yeast.
– Mix 125ml warm water with 30ml olive oil in a separate jug, then add to the flour mixture to make a soft but not sticky dough. Add more water if you need to.
– Knead for 10 minutes if by hand or about 5 mins if using a dough hook.
– Roll out the dough as flat as you can and out on a baking or pizza tray.
– Cover the dough loosely with cling-film, but make sure its still air tight.
– Leave in a warm, but not hot place for 30-40 minutes.
Heat the oven to 220 c (425 f) or gas mark 7. Roll out the dough a bit more to knock some air out and prick some holes in the dough with a fork. Then add a sauce and any toppings you like!
I blended up some tomatoes and spread that on top as the base. I then added some light mozzarella, parma ham, quartered figs and topped with rocket once it was cooked – yum!
Some other toppings you could try are:
– Courgettes and feta with hummus as the base
– Sliced sausages, red onion and peppers on a tomato base
– BBQ sauce base with shredded chicken and cheese
– Tuna, red onion and sweetcorn 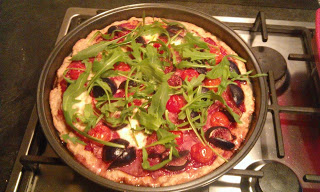