On July 24th in Utah it is Pioneer Day so that meant a few things; lots of American flags going up in the streets, parades, marching bands and the like and the best one- Mike got a day off work! The McKeen’s were heading up to Idaho to see their Grandma and one of their cousin’s who lives up there was leaving on a mission, so we decided to go with them for the weekend.

We drove up Friday morning and made good time (having the sports car probably helped!). We went swimming in the lake that afternoon with most of the people. Mike and I made a bonfire that evening (with help from Deb) and toasted marshmallows. Janet had brought up some fireworks so they set those off in celebration of the Pioneer’s! Felt like Bonfire night lol, just considerably warmer!
Saturday was really good- Mike and I went up to Rexburg to see the new temple there. It is set right up on the hill so you can’t miss it. We drove around BYU-Idaho and brought back EFY memories for me and when I had stayed up there for a few weeks one summer with Angie and Kristen. Mike was less enthused and was glad he had chosen to study for a little bit at BYU in Provo rather than in Idaho- not really his kind of place…
We got back, had lunch and then got all ready to float the river. We went to one of the bridge’s by the river to jump in with our inner tubes (rubber rings for all the Brits!). It was freezing!! But definitely a better way to get in then walking in bit by bit. There were some rope swings and mini-rapids on route which made it really fun- I should remember to take my contacts out though as I was just worrying that I had lost them every minute. The river took us out to the same lake we swam in yesterday, and after the river, it felt like a warm bath! So we swam a bit more there and had a spot of sun bathing.
Grandma Birds Garden: 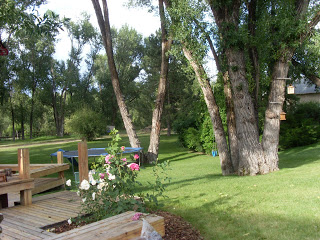 That evening we all ate a lovely dinner, had ice cream cones and Mike and I were taught how to play croquet- a very good game indeed! They all thought it was funny that we had to travel all the way to the US to learn how to play croquet!! Mike loves it and is now looking to invest in a set, well, when we have a garden big enough to play!! 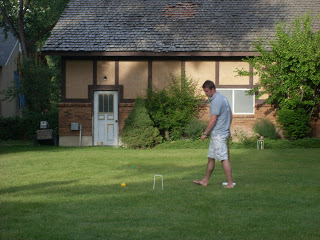 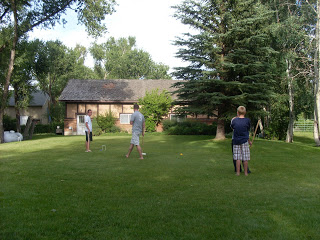