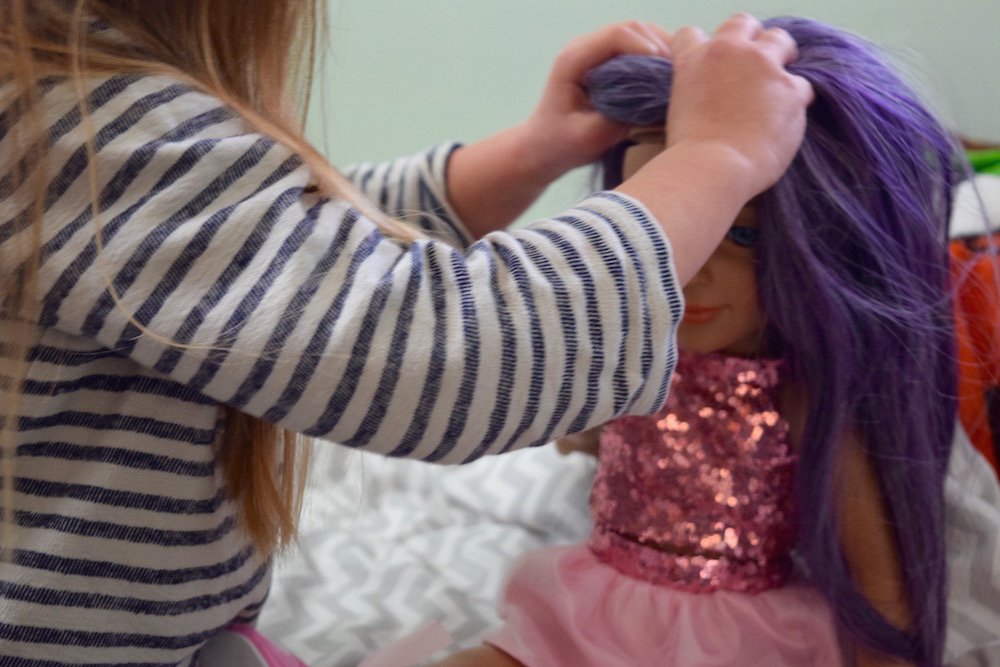 If you follow me on my social media channels you will have seen that Chloe and I attended the I’M A GIRLY UK launch party in London, as basically, it involved dolls, which is something that Chloe really loves, and we (especially me) were interested in the idea behind these high-end dolls that have just been launched in the UK. The I’M A GIRLY fashion dolls are developed by the company’s kids for kids approach, which means that children aged 9-13 helped design these dolls, which gives them something really unique on the market, and the aim of getting a doll that children those agse would like.

The brand originates from Switzerland, which I think is where they got the name from. ‘Girly,’ in the day and age we live is sometimes seen to have negative connotations, but in Swiss, it doesn’t mean the same, simply adding the ‘y’ to make the sound of girl nicer. So the brand is really meaning I’m a girl, as the dolls are all females (though I know there would be boys that would want to play with them too).

The launch was to see what the dolls were all about and celebrate the range of dolls that are going on sale in Harrods and Hamleys right now. It was fun to see the different styles that the accessories come in, and I was impressed by the range of skin tones for the doll, so that everyone can choose a doll that they like or that looks like them. Chloe was lucky to be sent her very own doll after the event, and she was thrilled when she got her doll of choice, Lola, as for her, it is all about the purple hair! The large eyes are very Chloe too, so in some ways, it is a doll that looks like her (but not that much).

The doll came in some really pretty packaging. The box is shiny and colourful, and the great thing is that it has an inner section that doubles up as a ‘wardrobe’ for the doll, and Chloe has even sat her down in front of it when brushing her hair, so that she can ‘see in the mirror.’ As well as the brand’s kids for kids policy, it also have a no waste policy, when in this day and age, is really nice to hear. You can just imagine how much waste households with kids will have after Christmas and when the toys are all opened; there can be a lot of unnecessary waste. So this was good to hear, and it fits well in Chloe’s room too, and a good storage place for the doll as well.

One of my favourite features about the I’M A GIRLY doll is that there is a ‘cut hair, don’t care’ slogan, which means that you can get creative with the dolls hair if you’d so wish, but because you can get replacement wigs, or all different hair styles and colours, the doll can look exactly what you want it to look like. The other really lovely features are things like little handbags, the cute shoes, and things like glasses that you can buy as extras, and they have their earrings pierced too. So your child can choose exactly what they want the doll to look like, and have the doll be anything that they want it to be.

I’d say that the closest comparison with the I’M A GIRLY doll (that start from £109), is an American Girl doll, which I know isn’t hugely popular over here. But the I’M A GIRLY doll seems much more modern to me, more creative, and give your child the chance to really make the doll their own.

I wasn’t sure what I was going to think of the doll, but it really is lovely and think it is a great addition to have in our home. I can see it being quite popular on Christmas lists as the years go on. Plus, can we just talk about the hair; I love it so much (if not a little gutted that a doll has cooler hair than me)!

Have you heard of the I’M A GIRLY doll before? It would be great to hear what you think.

*This post is part of a paid project with I’M A GIRLY and BritMums, promoting the I’M A GIRLY Fashion-Dolls, new high-end fashion dolls that just landed in Harrods and Hamleys. They are hip, cheeky, trendy and a bridge between childhood and teenage years. See the dolls and accessories at https://www.imagirly.com/uk/