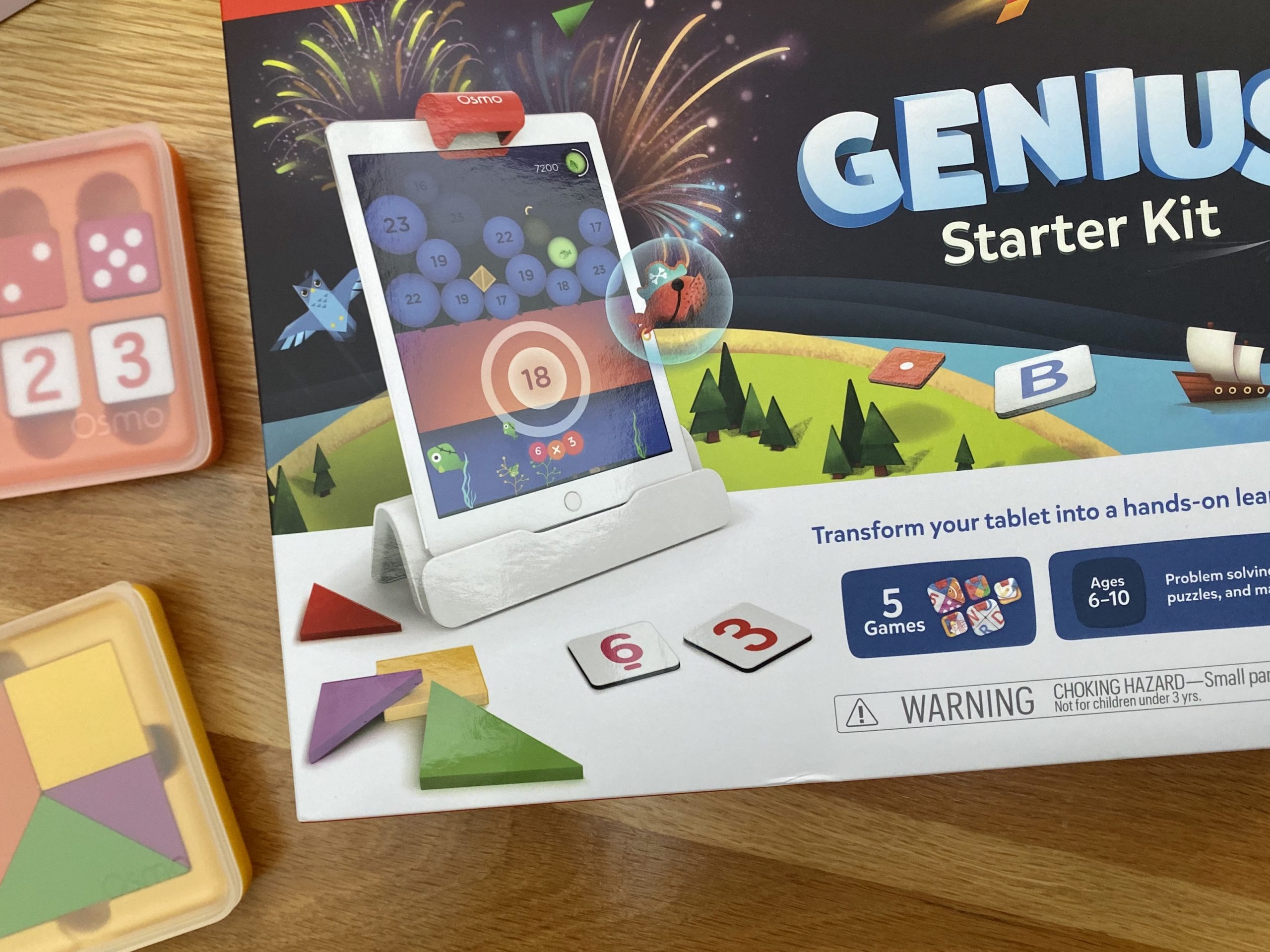 I don’t think as a parent, that you can get away without using some technology in the home with your children. Things are so tech-based now, from the TV and apps on there like Netflix, to games, and tablets. I am also someone who owns a childcare business within a school setting, and even Ofsted look for you to use technology. So of course, people can limit what their children have access to, and control the age that their children start using technology. But it is here to stay, so for me, it is all about knowing the best ways to use technology to help children learn, rather than them just watching mindless hours of YouTube.

Learning through play with Osmo

I’m really pleased to be working with Osmo to try out their award-winning gaming system I was really interested to see what it was all about; does it change how my children use their iPad?

We were sent the Genius Starter Kit which is a great way to get started in the world of Osmo. It comes with all that you need to be able to interact and have hands-on learning in five different ways, and I really like that is learning and doing something physical, but it has the digital side of things too. The whole thing was easy to set up, with the base for your iPad and a clip-on mirror tab that goes just above the camera on the iPad; it is so clever how this all works! It also comes with some game packs, with a few pieces needed for each of the games. From there, you can download the Osmo app, create an account, make a profile (we did one for each child), and then you can get started with the games.

One of the games that comes with the starter kit is tangram, which is all about shapes and problem-solving in a really visual way. My children have played tangram games like this on the iPad before, but having the hands-on approach to it, really brings it all to life and makes them think in a different way because it is right there in front of them. You can increase the difficulty of the levels as well, making it something that is suitable for children of various ages.

The second game is a word game, which as you might imagine, is all about words. There are images that come on screen and then you fill in the blanks for the word of what is on screen. I liked that there are different modes on this, so you can play with friends and family, but can also play alone, so it can be more social if it needs to be.

Another game that the starter kit comes with is Newton, which is more science-based, with an element of physics and problem-solving involved. My son liked this one the most (he is aged eight) and he liked that each level became faster, so it really helped him to think on his feet, so to speak, and give him a challenge to aim for next time.

One of the other games is the masterpiece game, which really, is less of a game if you think about it. You can take a picture of something, like one of your own toys or items in the house, or choose from their library of pictures. Then you just use a blank piece of paper on the table in front of Osmo and ‘trace’ the image. My daughter really liked this anyway, as she loves to draw, but it was even more fun to see what it looked like afterwards, when the photo / image is taken away, and their picture is there to see. Osmo also records them drawing the image, so Chloe thought it was amazing to see a video (time-lapse) of her drawing. It is a really cool feature.

The numbers game is the final game that the starter kit comes with, and it is a really fun way to look at maths. It takes the formal school feeling out of maths and makes it more fun, and it also shows them that there are a few ways of making different numbers. For example, if you want to get the number 7 fish, you could use a five and two dice, but you could also use three twos and one of the ones. So from that perspective it is a really great tool for the age that my children are, as they will tailor it to what they know and can understand.

I asked both of my children what they thought of it after using it for a little while, and go my son immediately said that is was ‘so cool’ and ‘amazing’ and has been asking to use it when we get back from school. Totally fine by me as I’d much rather that when I’m making dinner than just watching YouTube. My daughter really loved the masterpiece and drawing game, and over time will get to grips with the other games. She was in awe of being able to watch the video back of her drawing the picture; such a clever idea.

I don’t think I have a bad word to say about it. I was even thinking about when we would use it, other than at home, and even travelling on a plane with it would work. You’d just need to get your tray table down. I really like that it helps creativity and imagination, encourages them to improve drawing skills, as well as being engaging, educational, and fun. If they keep asking for it, then they aren’t even realising that they are learning! It also can be used as they get older, as the games can be stepped up a level and made more difficult as they learn and grow in their skills and knowledge. I can see this being something that we can use again and again, so from that point of view, it would definitely be good value for money.

In the future it would be great to see some additions like coding perhaps, or other games to learn and have fun with. An Osmo base with a foldable tray would be cool too, if you were going to use this more for travel (in the car and on trains, and so on).

Have you heard of Osmo before? Have you seen it around? It would be great to hear what you think.

*the Osmo was gifted in exchange for review through their partnership with Mumset. I have been compensated for my time, but all words and opinions are my own.