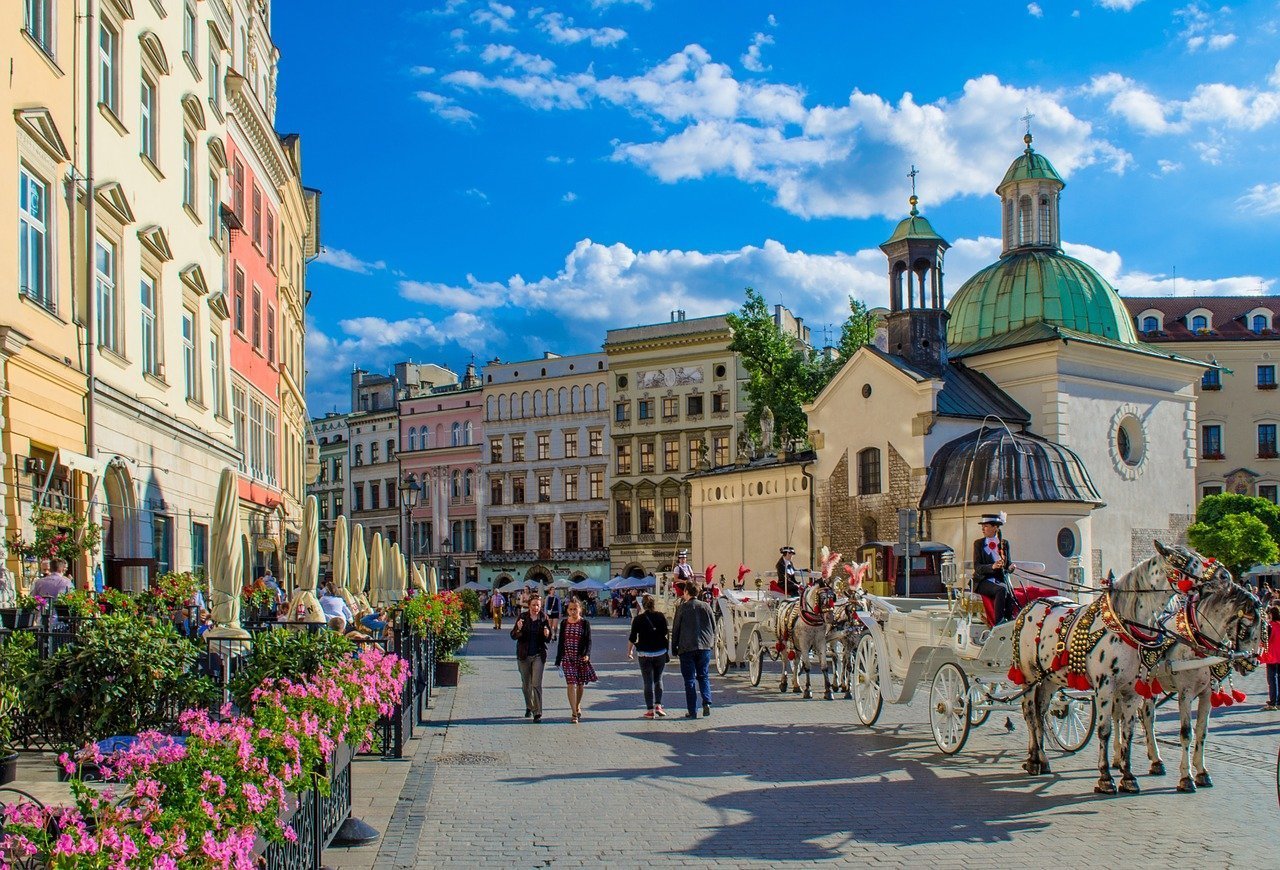 We recently took a trip to Krakow, Poland, just the two of us, so I thought I would share what we got up to. It was great to discover a brand new city (and country) that neither of us had been to before. We had a companion voucher to use up, before the start of October, and Krakow was on the list of places to choose from, so we went from there (I have written before about our BA credit card and how it helps us to get air miles. if you’re sensible and only spend what you can afford and pay it off, then you can really reap the benefits and make travel cheaper).

Our trip was a Saturday to a Wednesday, evening flights on each. So as we landed about 8pm on the Saturday, really it only left us with four full days to explore (though it was nice to take advantage of the duty-free and business lounge at terminal 5 without children).

As Sunday was our first full day, we started off by heading to visit Wawel Castle, which is really prominent in the city. The castle itself is pretty huge with large grounds too. So great for a walk and a sit down if needed. There are some parts of the castle that you pay to go in; others you don’t. So you can spend a while there, or not a lot of time; up to you.

After that, we decided to head into the main square, which is home to a lot of restaurants, cafes, bars, shops, and cute market stalls. There are so many flower stalls too! The architecture in the square is so beautiful, and I really loved seeing it all; really unlike anything we have in the UK. There are a few churches too, with St. Mary’s Cathedral being the main attraction in the square. There are some cute horse drawn carriage rides that you can pay for too. We didn’t, but I think if the children had been with us, we would have.

The next stop was to just look in a few of the shops and see some of the street art; so much prettiness everywhere you look. The main square is also surrounded by green space, sweetly named Parky Park, so it was a good chance to chill and rest with a drink. From there, we headed south of the city towards the river, to have a walk along the river. There are boat tours and ferry rides that you can go on, but we just had a walk, and then headed back to one of the city’s main malls.

Our next thing was pretty non-tourist-like and we went to the cinema! We took advantage of not having children with us and saw movie that we knew we wouldn’t get chance to see together back at home. The good news is that for most films, they are in English with Polish subtitles, so there was no problem there (children’s movies are all in Polish). From there we went back to our Airbnb to freshen up, and the it was out to find some Polish food for dinner.

One of the main things that confirmed our decision to go to Krakow was to go to visit Auschwitz-Birkeneau, the concentration camp from the second World War. We had left it a little late to book tour tickets in English, but luckily our Airbnb host was able to arrange a tour for us and it meant we had a driver that day. You can get public transport to it, but it is about an hour out of Krakow, and booking in advance is a must.

There are two parts to the tour, the first at the original camp, where passengers would arrive. The second parts was at Birkeneau II where the majority of the prisoners lived and worked; it was huge.

As our guide on the day said, it isn’t a place to be enjoyed, but to learn. So I don’t feel like I can really ‘recommend’ it at all. But in order to understand the scale and the horror of it all, seeing is believing; it put it all into perspective, even though I have read a lot about Auschwitz. It helps to give a greater understanding of the human experience of it all, so for that reason, I think that everyone needs to visit at least once in their life.

The tour itself is around 3 hours, but with the drive either side, it really is a full day out.

Tuesday was the husband’s birthday, and I had arranged ahead of time to visit the Wieliczka Salt Mine*, which is around 15 minute drive from the city, and one of the main tourist attractions. We took an Uber there for around £5, but if you are staying centrally, there is a train that you can take too.

The salt mine itself is huge, and again, you need a full day really, as it takes around three hours for the full tour. I was just blown away by the history of it all and how it all got started and what has happened with it since. The amount of things that can be made from salt is amazing too, with a chapel in the centre for the tour made only from salt, including the chandelier, decorations, and floor tiles! You go about 100m down in total, and there are different tour options, depending on what you are after. We did the tourist route, but there options if you have children with you, need wheelchair access, or want to see what life was like in the mine; they will put you to work!

I would definitely go again, and think it is worth going if you are in the city. The main point I would add is that you should book online in advance, because otherwise you could face some long queues. We did visit in summer, so was probably busier than normal, but you never know.

This was our final day, with our flight in the evening around 9pm. So we still had a whole day to enjoy! We started off with heading to the main square again, to see what we had missed before, and enjoy some of the doughy pretzels on sale in the square. We looked in a few more of the shops too, and looked at the adorable little indoor market.

After that, we headed down to Oskar Schindler’s Enamel Factory in the Jewish Quarter of the city. You can learn all about the man Schindler who helped many Jews in the war, and the history of the area; the mind boggles at just how many Jews used to reside there but now no longer do after so many moved away, or were killed, during the war. They filmed quite a but of Schindler’s List in the area too.

Like everything else here, you need to make sure that you book in advance; they only have a certain number of tickets that they can issue on the day.

From there we went to discover more of the Jewish Quarter, and found an amazing Israeli restaurant which had a delicious mezzo of falafel and hummus. The restaurant was called Hummus and Happiness, which said it all!

After that, we spent more time in the park, and then discovered some Polish treats, like they filled donuts, and also found a super random Harry Potter themed bar for some ‘butter beer’ before our flight.

We had such a great time in Krakow, as there are plenty of things to see and do, and the food is amazing! The weather was good as well, and as the city itself isn’t that huge, you can explore it really easily. The architecture is amazing! I would definitely recommend a trip over to Poland!

*our tickets to the salt mine were gifted in exchange for this post. All words and opinions are my own.