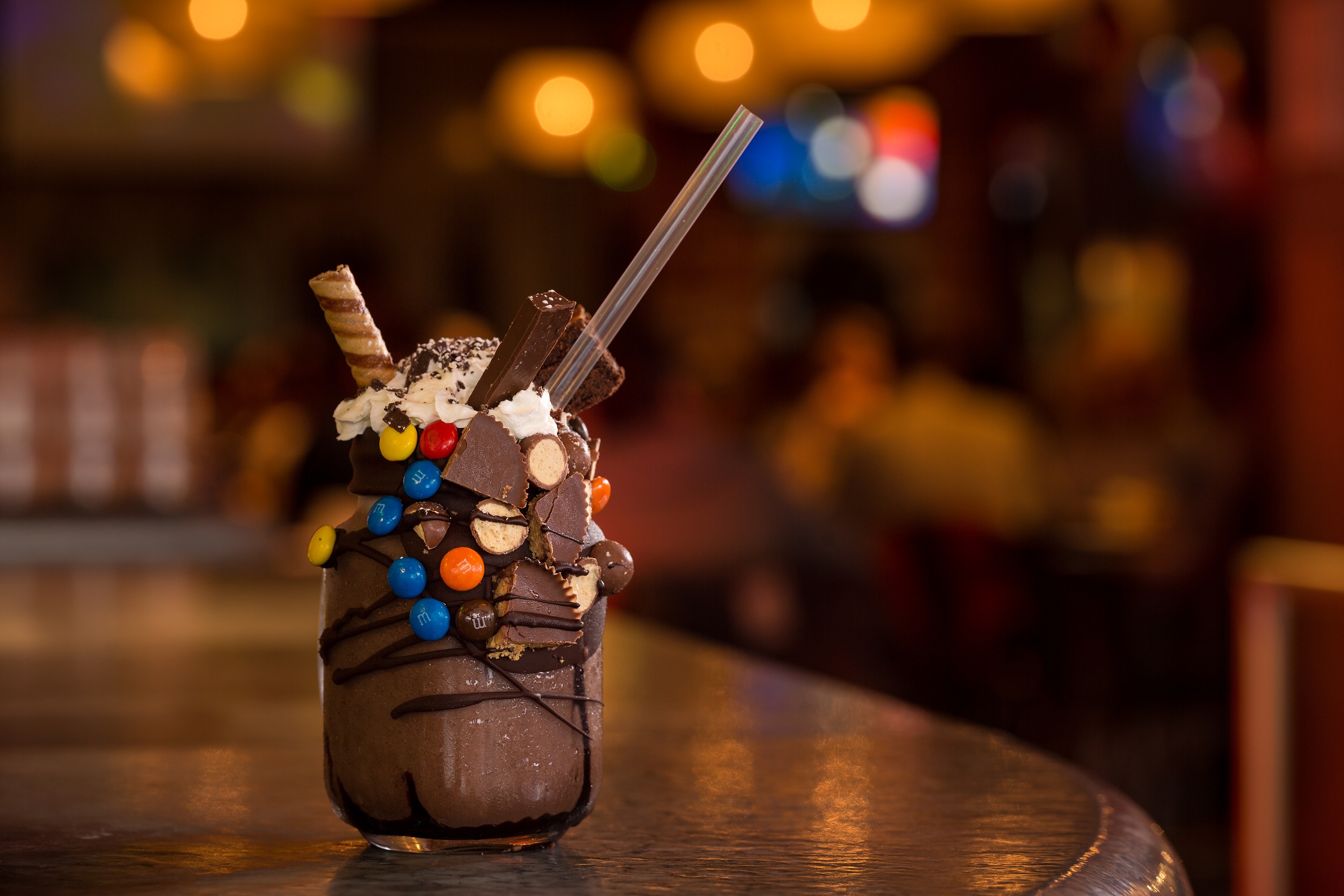 After a busy day exploring in London with the kids, being able to eat somewhere for a family meal, that will cater for everyone is a must. Some days are just not times when you want to pay for food that they will eat very little of.

The good thing about London is that there are plenty of family-friendly restaurants to choose from. But why not eat out at the restaurant that has been voted as the number one child friendly restaurant in London, for the fourth year running? If that sounds like a plan to you, then Planet Hollywood London is where it is at. I have only ever eaten at one Planet Hollywood before (the iconic globe restaurant at Disneyland Paris), plus it was a while ago, so I was interested to see what the menu was like and if it had changed.

First thing is first, what was the restaurant like when we first walked in? The first thing that strikes you is the movie memorabilia in the entrance way. It was Star Wars props, and with a Star Wars mad son, it was really cool to see. The staff at the front of house were friendly and helpful and we were taken to a table really quickly. There was an amazing dining atmosphere, with music playing and large screens playing music videos, as well as personal messages.

It really is a fun place to eat out and with lots to look at, there is plenty to keep the kids occupied. 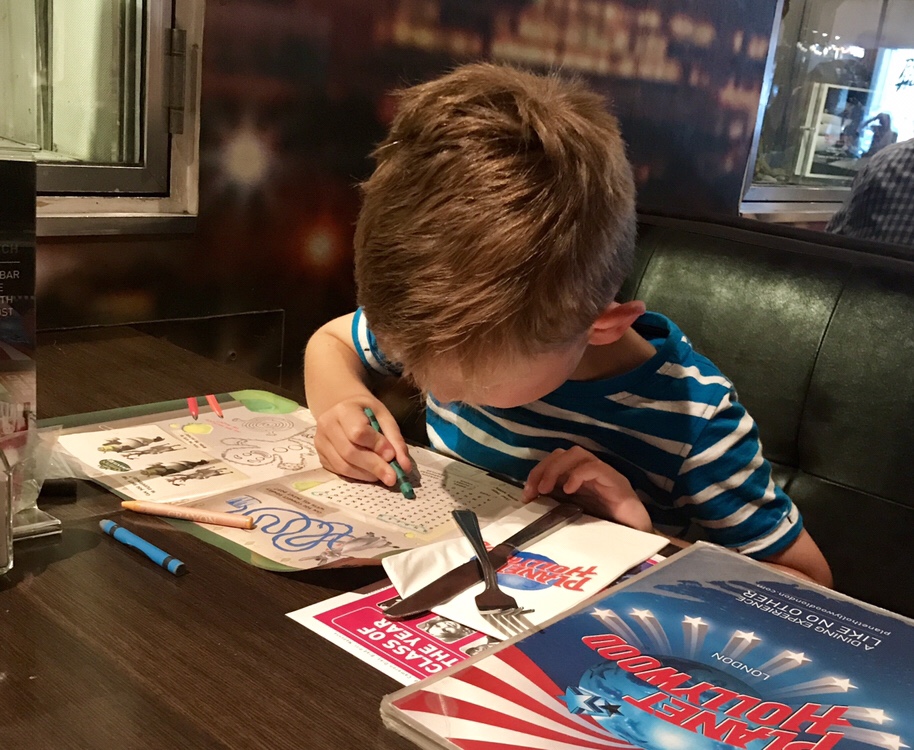 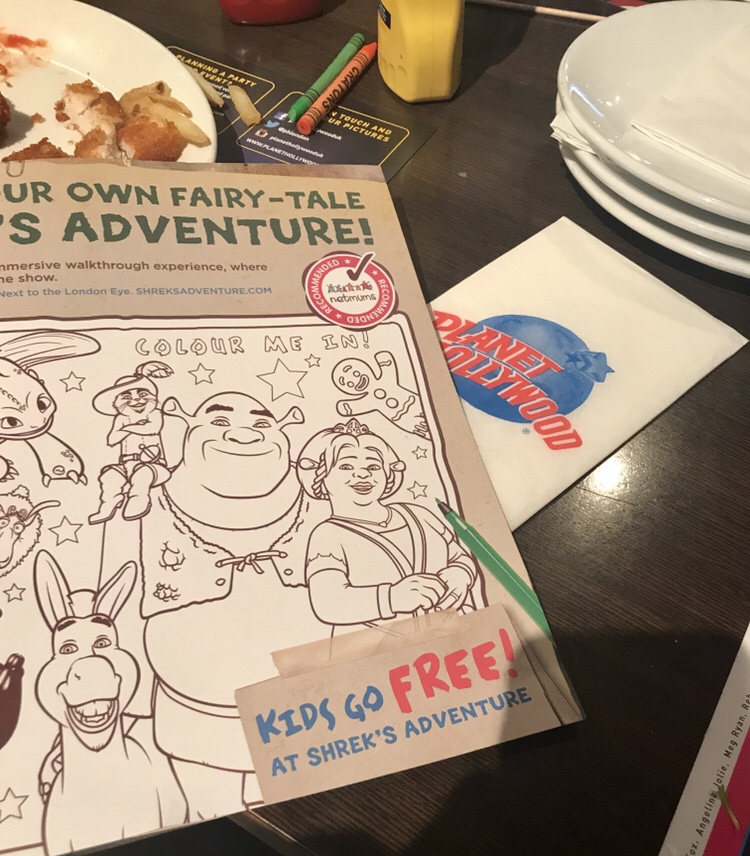 The fact that there are plenty of things to look at makes it a fun place for children, but there are plenty of other reasons too. There is a children’s menu, with quite a few different selections, that include drinks an a dessert. The kids were also given their own colouring sheet with crayons too (always a winner when you’re waiting for food). Speaking of which, our waiter asked when we wanted the children’s food (right away or when we had our mains), without me having to ask anything first, which I think is a really nice touch. They know the drama of having hungry littles ones around!

Over the summer, Planet Hollywood London are also offering FREE entry for every child that eats at Planet Hollywood, to Shrek’s Adventure London (one free child place per paying adult). So a great way to kill two birds with one stone in the school holidays, so to speak. 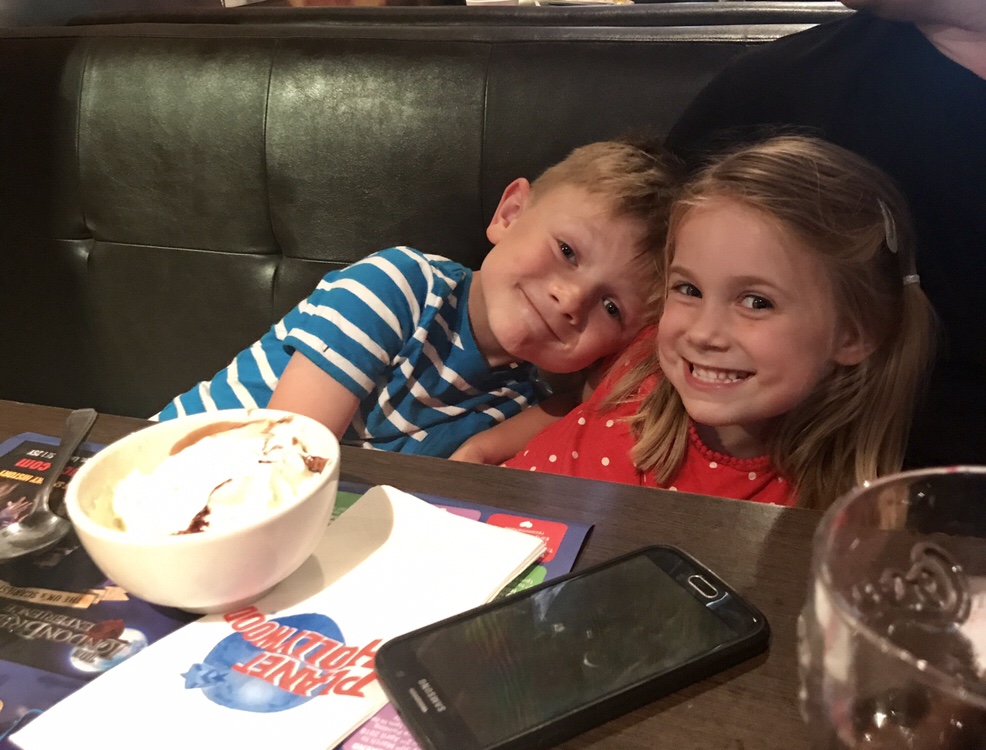 The menu was really varied and with so much choice; it was hard to choose what to have! I liked that there is a complete different range of things, from burgers and ribs, to vegetarian options and salads. There is a whole gluten-free menu too which is pretty rare to find. We don’t suffer from allergies, but I like to see that there are plenty of options out there depending on what you eat.

I started with a cheese dip and nachos, which was honestly amazing but such a large portion. Then I had a greek salad for afterwards. Mr. U had the blackened shrimp to start, and ribs for his main course, and the kids chose hot dogs and chicken nuggets (and they got ice cream for afterwards). 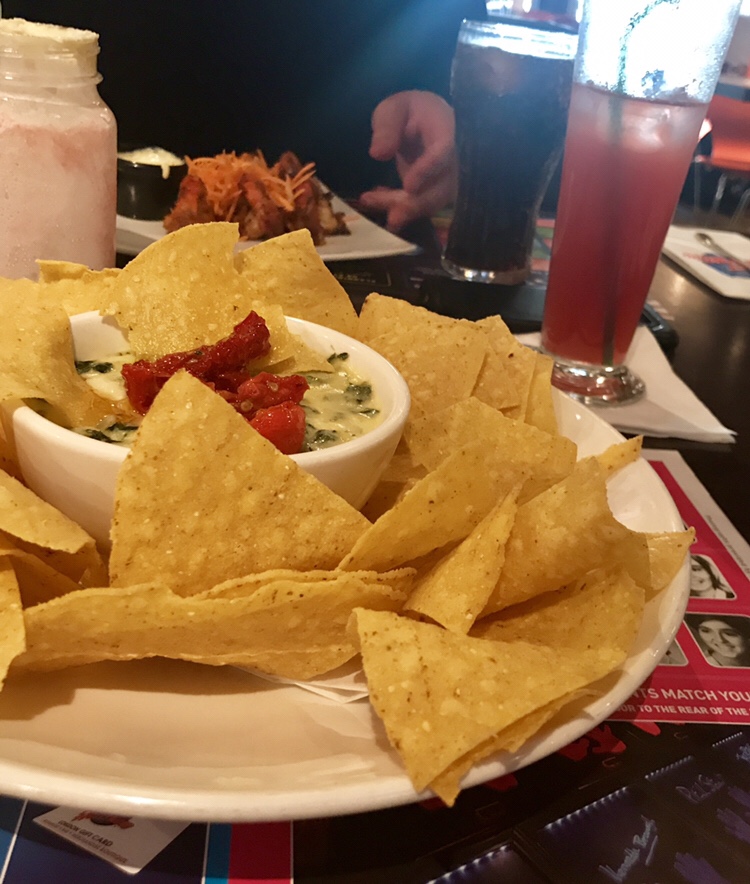 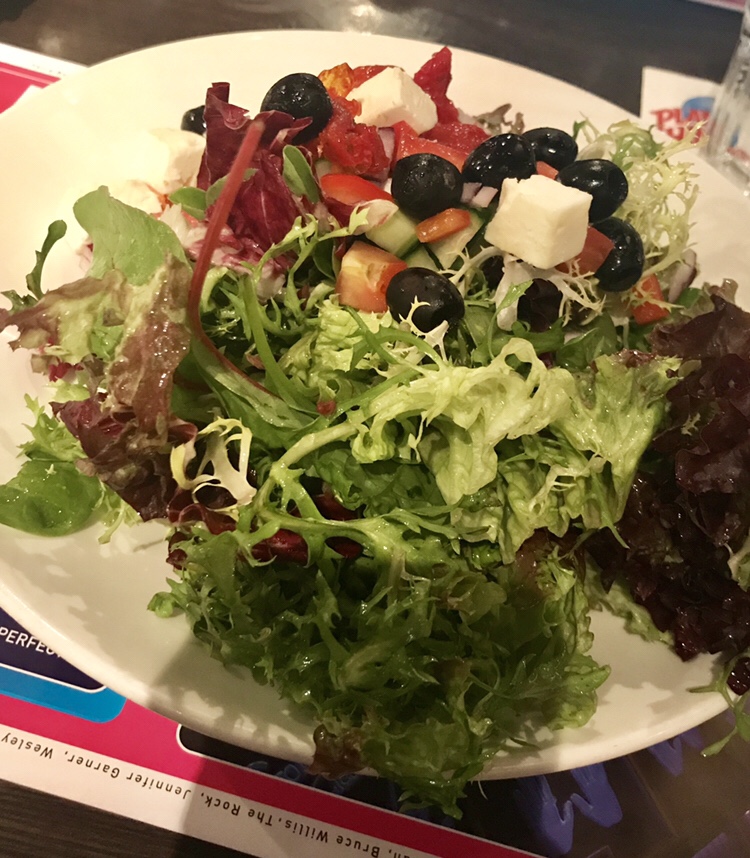 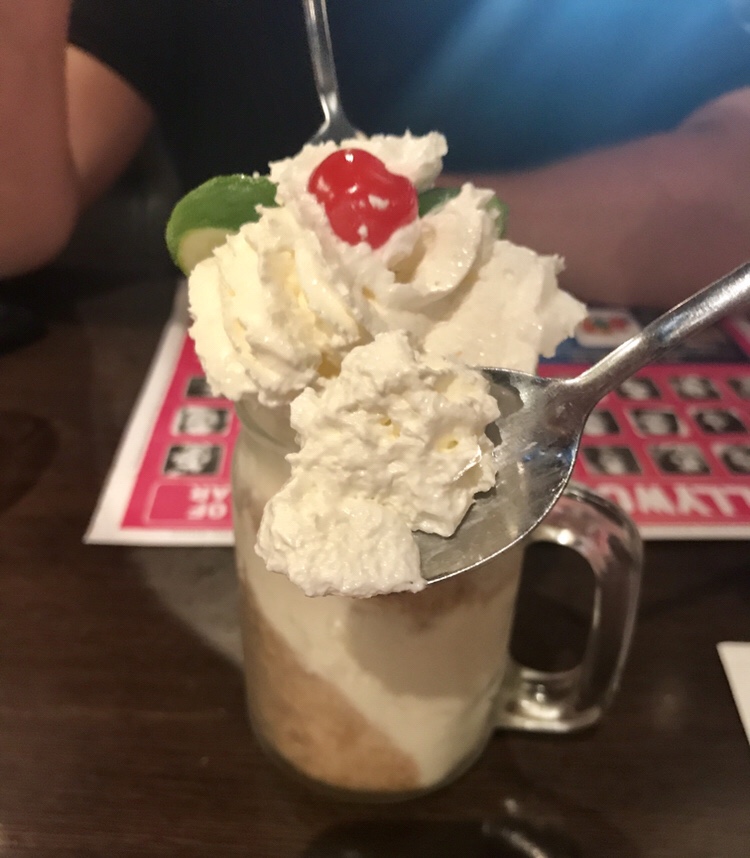 The drinks menu was varied too, with juice, soft drinks, cocktails, and milkshakes. Trust the husband to choose the supernova milkshake, complete with doughnut and sweets. It looked incredible.

We were all pleased with our meals, and they are definitely hearty portions, so you do get value for money (especially if you take the leftovers home). Speaking of the prices, they are really comparable to other London restaurants, and particularly chains like TGIs. So it can definitely be a good option for you next time you’re in London town. 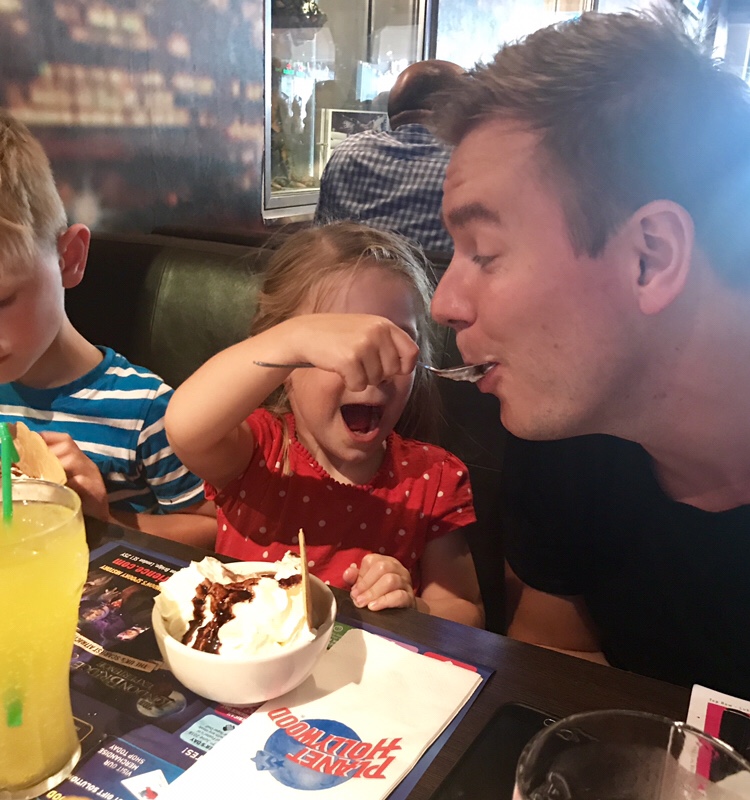 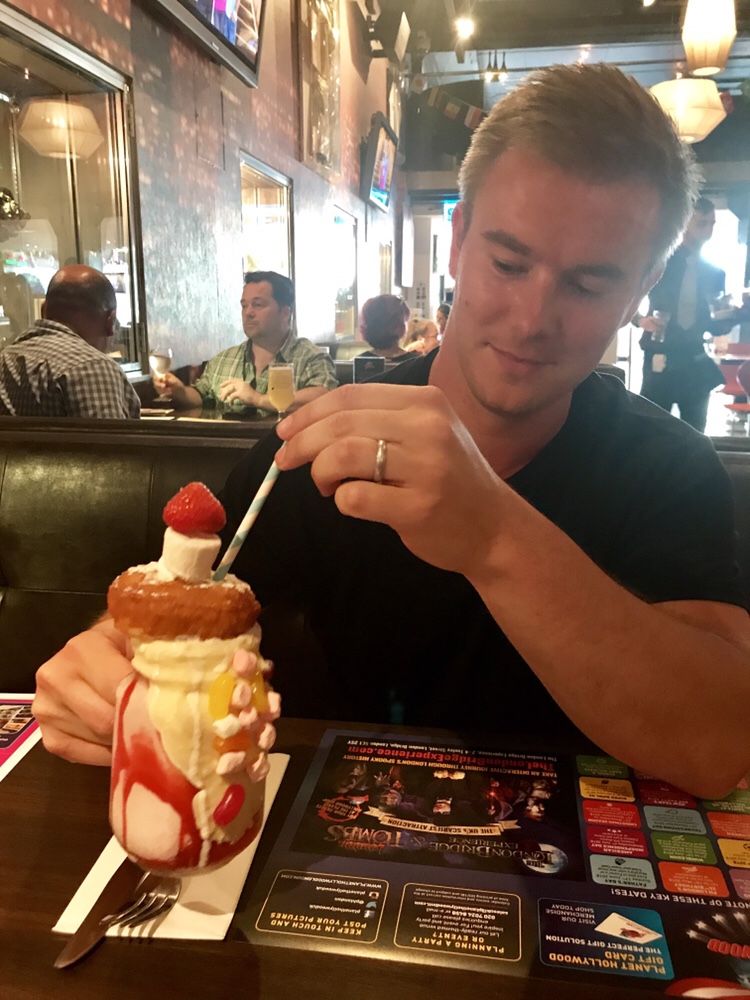 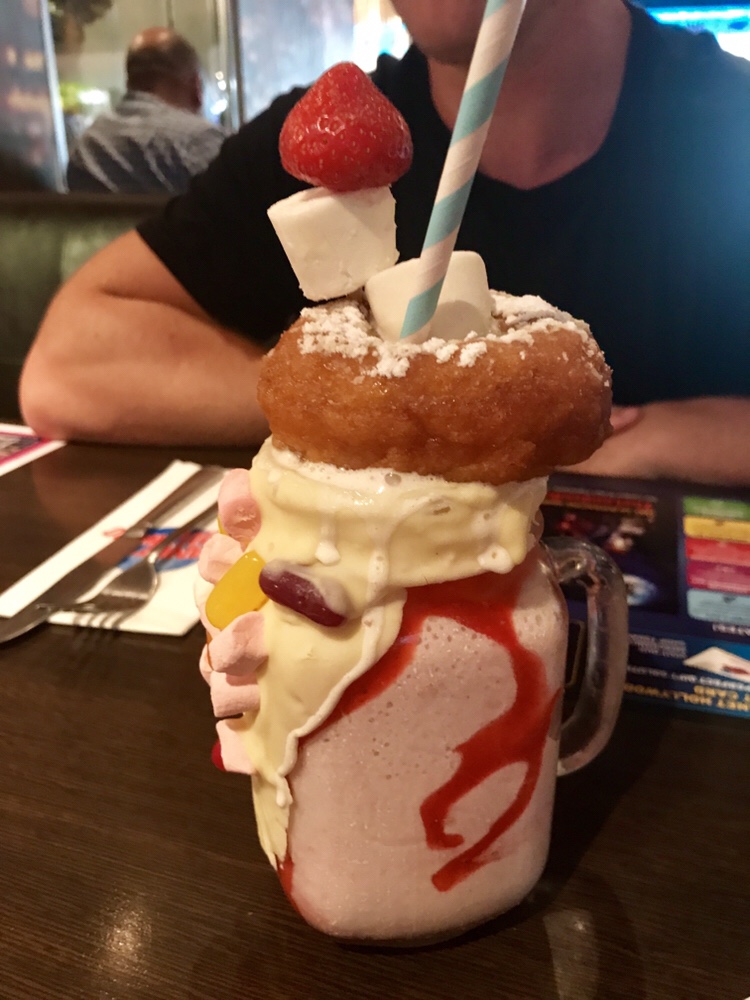 As I’ve said, the atmosphere was just amazing. Really fun and friendly. The staff were great, and were all friendly and upbeat too; just like the restaurant. The screens played music videos, as well as playing messages that you can send in – the kids loved seeing there names upon the screens, so it really is a good feature and would be great for a celebration or special occasion. they also filmed some of the people in the restaurant when some music was playing which was really funny (kiss cam style without the kissing). I just like that it is something different, and again, the kids loved seeing themselves on the screen. 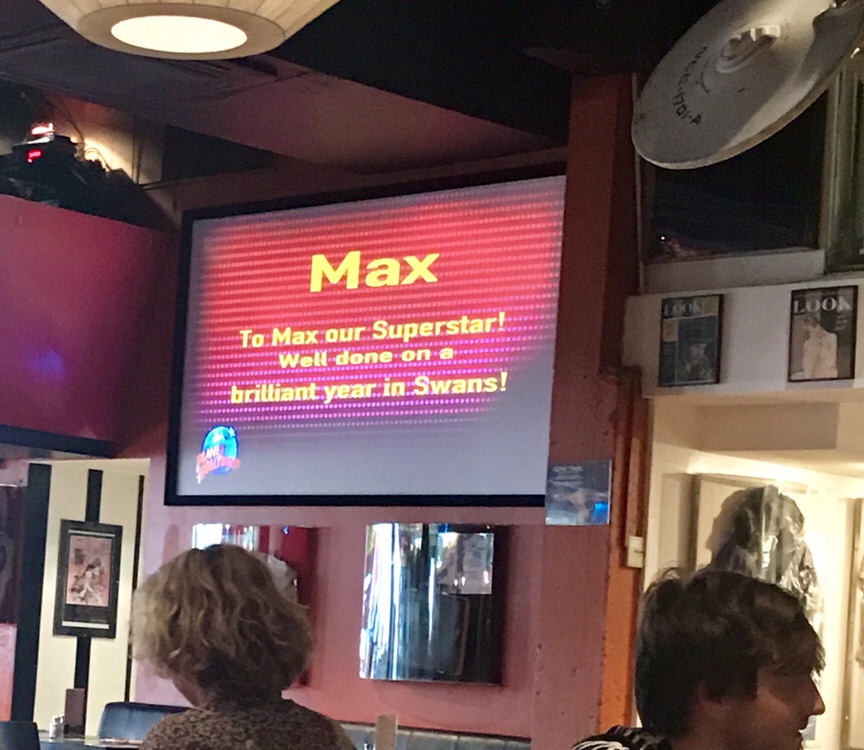 If you’re in London over the summer with the kids, I think that Planet Hollywood is a must to eat at. It was lots of fun, kid-friendly food, and value for money; you get plenty.

Have you ever been to Planet Hollywood London? It would be great to hear what you think.

*we dined as guests of Planet Hollywood. All words and opinions are my own.