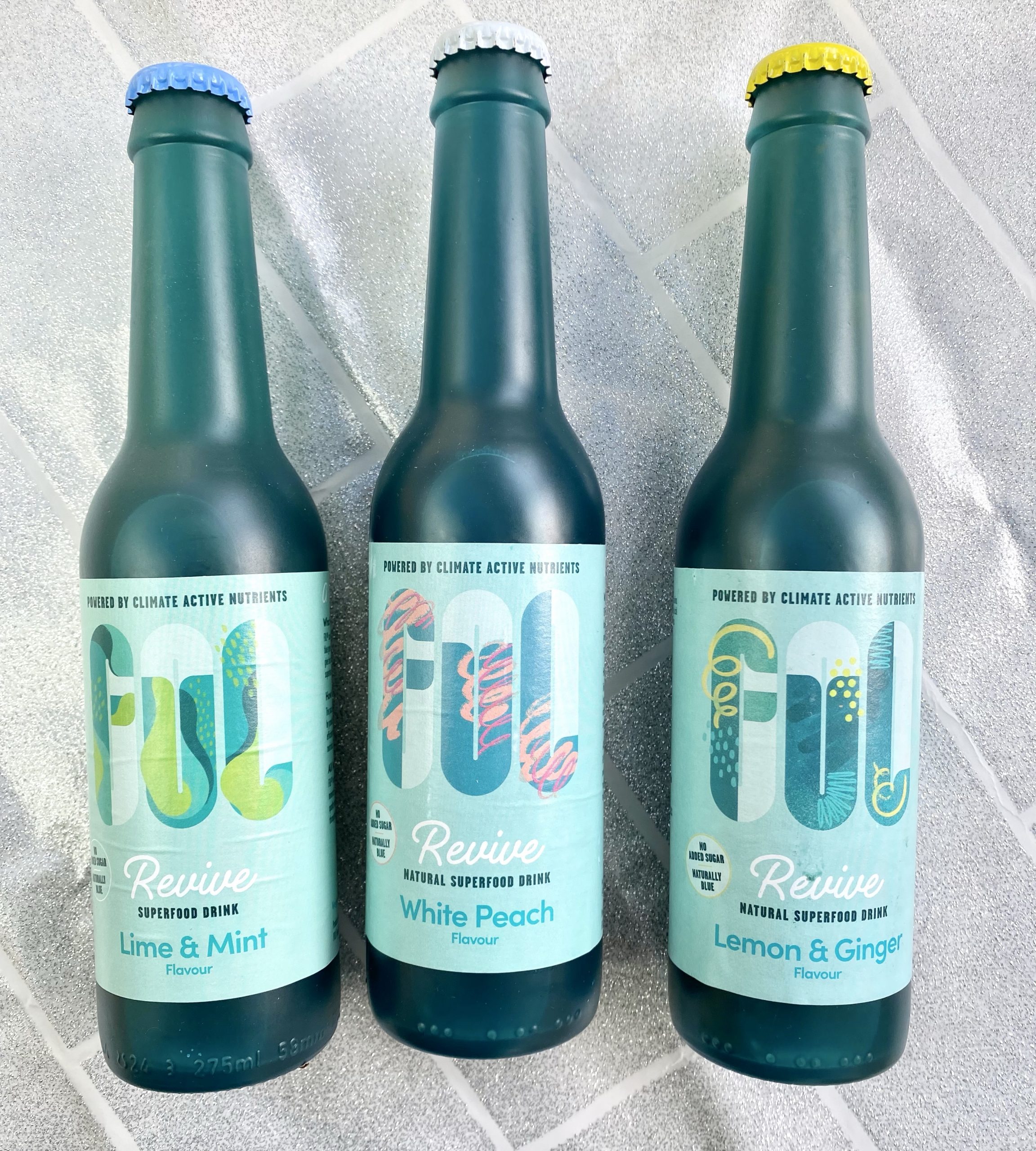 If I told you that you could have a sparkling and fruity drink that is good for not only you, but the planet too, would you believe me? I was skeptical as well, until I was introduced to the superfood drink FUL. A drink that comes in three different flavours, is vegan, full of goodness, calcium, vitamin c, antioxidants, and is low calorie, is definitely something I can get on board with.

The drink itself comes in a glass bottle, which already puts it over and above any kind of competitors in the sparkling drink category that has plastic bottles. Being something that can be poured into a glass, used as a mixer, or drank by itself out of the bottle, it can be a good option to have when socialising with friends.

But what is all of the natural goodness that is inside, and that gives it that unique dark turquoise colour? The drink is designed with refreshment in mind, giving you a lot of natural goodness, right from nature. The blue/ green superfood powerhouse that you find in the drink is spirulina. This is something that I had heard of before, but didn’t know too much about (in fact, a small amount is used in the veggie Percy Pigs to give the pigs their green ears). However, it does much more than give a blue/green colour to things.

Spirulina is a completely natural superfood that comes from the algae family. It is the same ingredient that gave rise to so much life on Earth billions of years ago, making it one of Mother Nature’s richest superfoods.

Not only that, but spirulina, and algae in general, have played an essential part in consuming the earth’s CO2 and playing a vital role in converting it into essential oxygen, so important for all of us on earth, as well as animals and other life. sustaining life on earth. With the world as it is at the moment, and there being such a focus on climate change and what we can all do, a drink that is ‘climate active’ for the planet is definitely a drink to get behind.

Being Climate Active for the Planet

FUL Superfood, when in the production process, actually converts more CO2 into oxygen and other nutrients, than it emits. So many things that we eat and drink don’t do this, at all, and the food industry in general is a big culprit for emitting greenhouse gases. The way that these drinks are produced flips the whole production process on its head which is really impressive.

As good as all of that is, you want to be drinking a sparkling drink, that gives you natural energy and nutrients, that tastes good, at the end of the day. The flavours of the drink are:

They all tasted great, although at first, it was an unusual experience drinking the drinks as you don’t expect a blue drink to taste of peach or lemon, but of course, it does! I found that the taste of spirulina wasn’t an overpowering one, although there is a definite taste to it. Combined with the fruity flavours, it makes a great choice for a drink, and one that I’d be happy to have again.

For a pack of six drinks, mixed flavours or a pack of six of one flavour, is £20.49. So it is definitely not a cheap option. Although I enjoyed the drinks, they would need to be something that is enjoyed more on a special occasion for me, rather than as a drink to have each day, for example. Having said that, you do pay more for glass bottles over plastic, and the drinks are made with quality ingredients, with the climate in mind, so you probably do pay a little more in that respect.

You can buy the drinks from the FUL Superfood website here, https://fulsuperfood.com/collections/website.

Have you heard of FUL before? It would be great to hear what you’re think.

*the drinks were gifted in exchange for an honest review. All thoughts and opinions are my own.