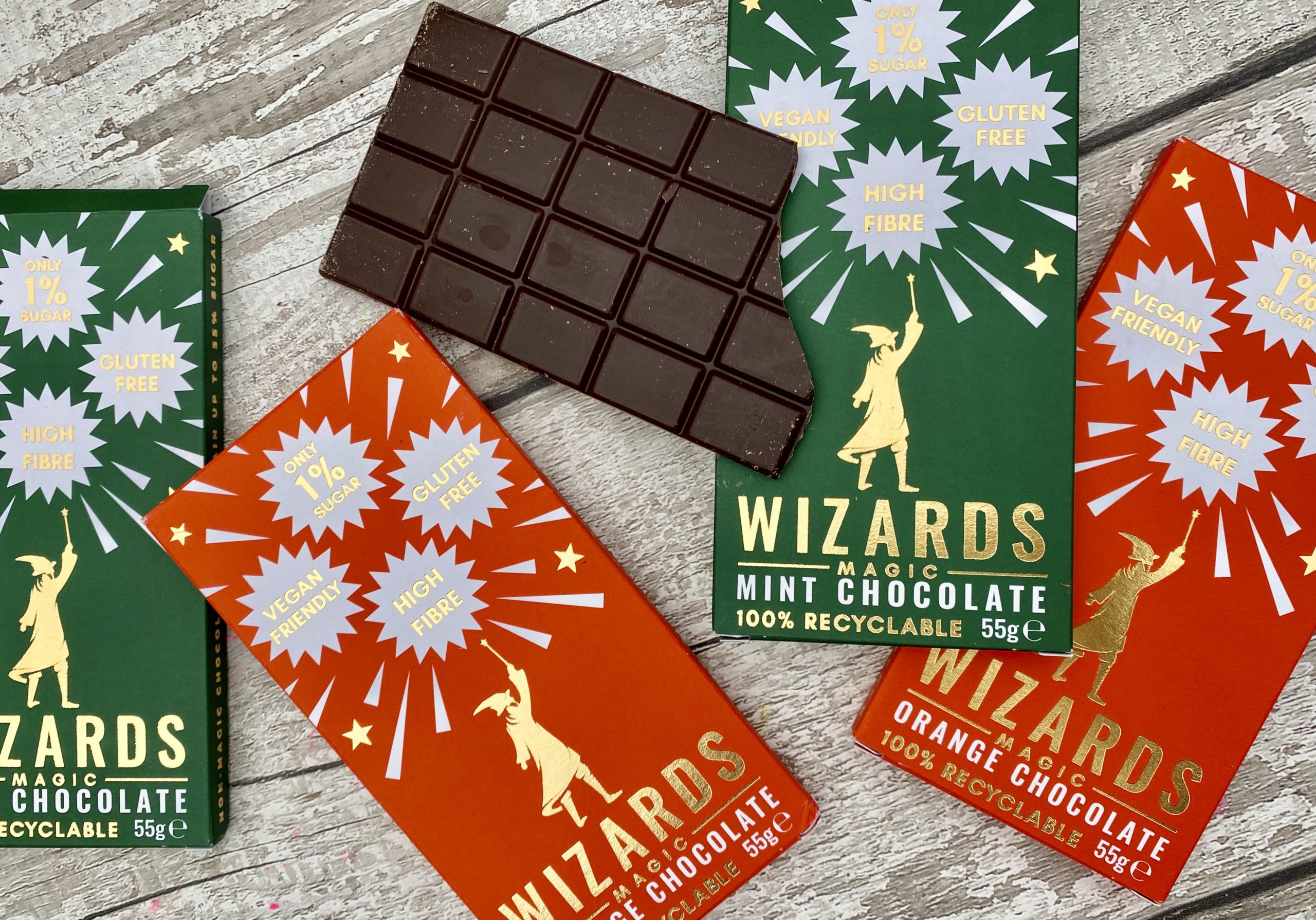 I have been adhering to a mostly vegan diet for quite a while now. I have been officially vegetarian for two and a half years now, and as we have some dairy intolerances (read: massive dislike) with some members of our household, milk and cheese are things that we buy very little of anyway. So the majority of our meals at home are vegan. It would only be if something has it in that diary would be consumed, though I generally avoid because of my PCOS and hormone imbalance. So being on the lookout for vegan treats is a must for us!

I have tried a few vegan chocolates over the years, and they are definitely not all created equal! I even started to make my own a while back, but it is hard to get it exactly like bought from a store when I do that.

However, I was recently introduced to The Wizards Magic chocolate, and now I think I have a new favourite! Available in online stores, as well as Ocado, it is a winner to get delivered right to your door!

The Wizards Magic chocolate claims that it is for those of us with truly magical tastes. Being magic chocolate, it has only 1% sugar, making it a great low-sugar option, as well as being 100% plant based, gluten free, dairy free, palm oil free, and full of fibre. It is also made in Britain, with 100% recyclable packaging, what else is there to love? Oh, how about the fact that it tastes great too?!

I am one of those people that loves to read a food product label. And instead of lots and lots of (unpronounceable words) there are just a few, and all things that I know. In fact, there are only five ingredients listed, including essential oils that give the chocolates their flavour. So for me, they are a much better option than a lot of the ones that are out there on the market.

Chocolate that is magic means that your blood sugar will remain the same, which is fantastic news for people like me who need to maintain a steady blood sugar, as well as people who are diabetic. Not only that, but you don’t get the same tooth decay or tooth irritation that you would with a ‘traditional’ chocolate bar, making it a great choice for children too. Low sugar doesn’t mean low taste, though. The chocolate is still sweet, smooth, and tastes great with the mint or orange essential oils (though there is an original favour too, just plain chocolate).

I was really interested to hear who was behind the team at Wizards Magic chocolate, and there definitely some magic involved! Oliver and James Phelps (the Weasley twins from the Harry Potter franchise) are two of the directors of the business. I don’t know if that is where the wizard connection came from, but it is pretty fun if it is!

The price of the bars at Ocado are £2.50 for a 55g bar. But at online stores like Handy Candy, you can get all three flavours for £5.99. It isn’t cheap, as far as chocolate bars go, but if you an spend that, and follow a vegan, low-sugar, or diary-free diet, then the taste is amazing, so I would definitely recommend. It would be a good choice if you were managing your weight too, as you don’t need many pieces as it is quite rich, but is very low in sugar.

Have you heard of Wizards Magic chocolate before? It would be great to hear what you think.