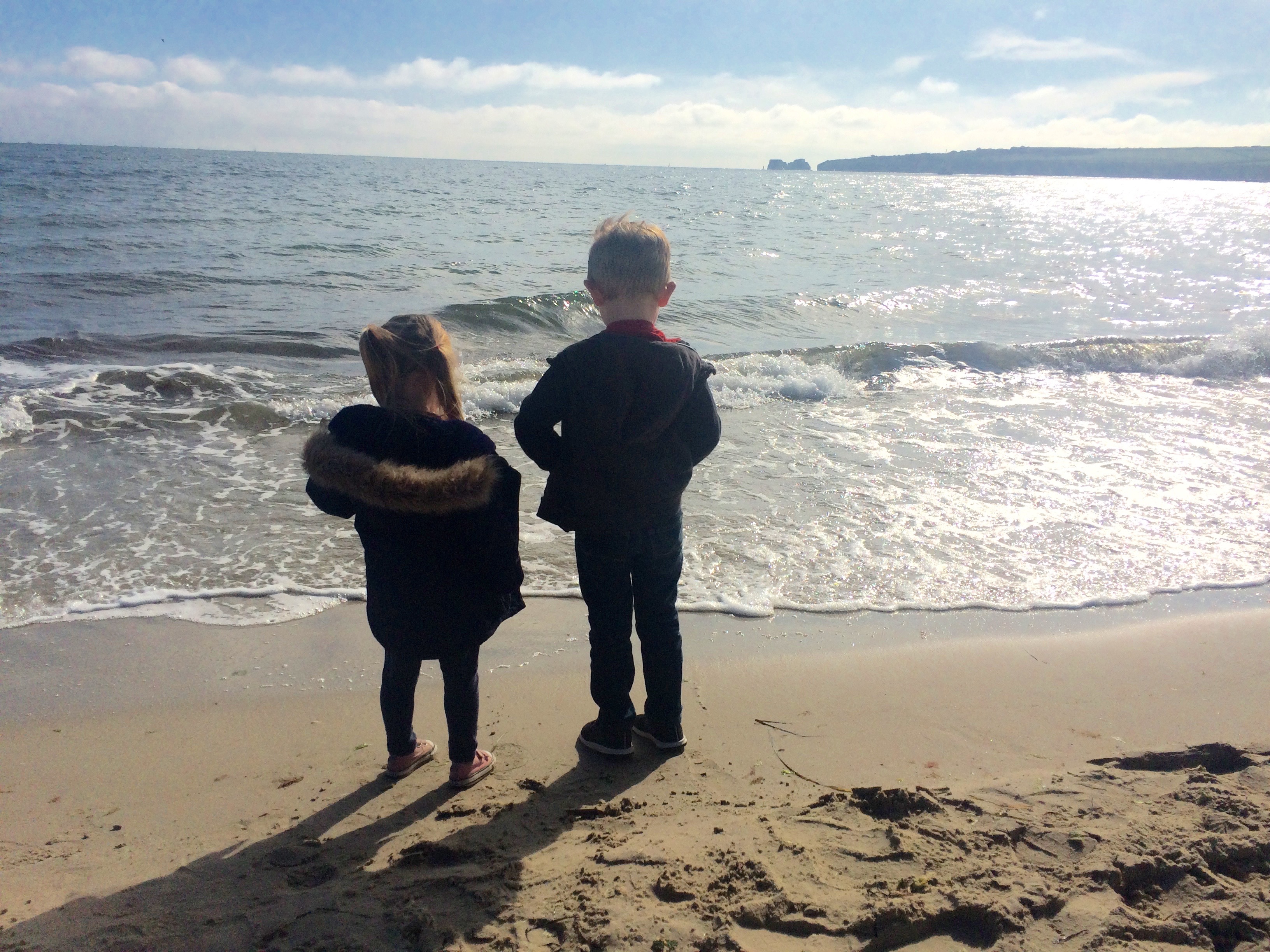 One of my favourite places that we went to on our recent trip to Dorset, was down at Studland Bay. The husband had been when he was an A-level geography student (but let’s face it, that was ages ago, ha), and I had never been. So it was a must on our list. Plus, the appeal of a vast area of sandy beaches and heathland ticks all the boxes for a weekend away with the kids. Plenty of space to run and play.

The whole places was stunning, with its glorious natural coastline,, including a four-mile stretch of golden, sandy beach, with gently shelving bathing waters and views of Old Harry Rocks and the Isle of Wight.

If you plan ahead, unlike us, then it is a great spot for water sports.

We saw plenty of people taking their kayaks and windsurfs out onto the relatively calm sea. It isn’t a British beach without some cute beach huts, that were located in the heathland behind the beach. A haven for native wildlife, we were hoping to find some of the British reptiles that are reported to reside there. We just enjoyed a walk through it instead. The kids loved chasing around, splashing in the sea, and hunting for shells and fossils (we didn’t find many lol). 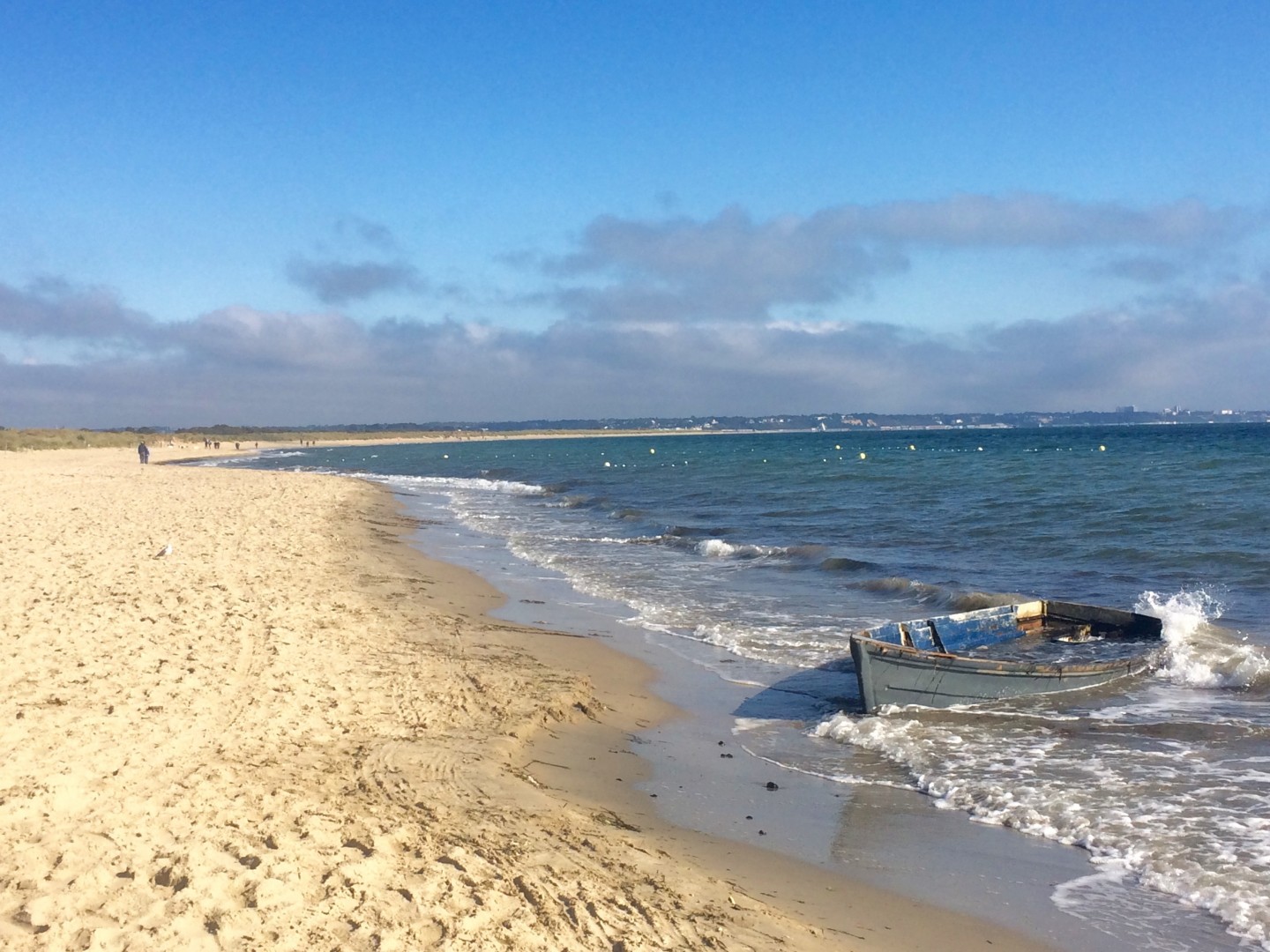 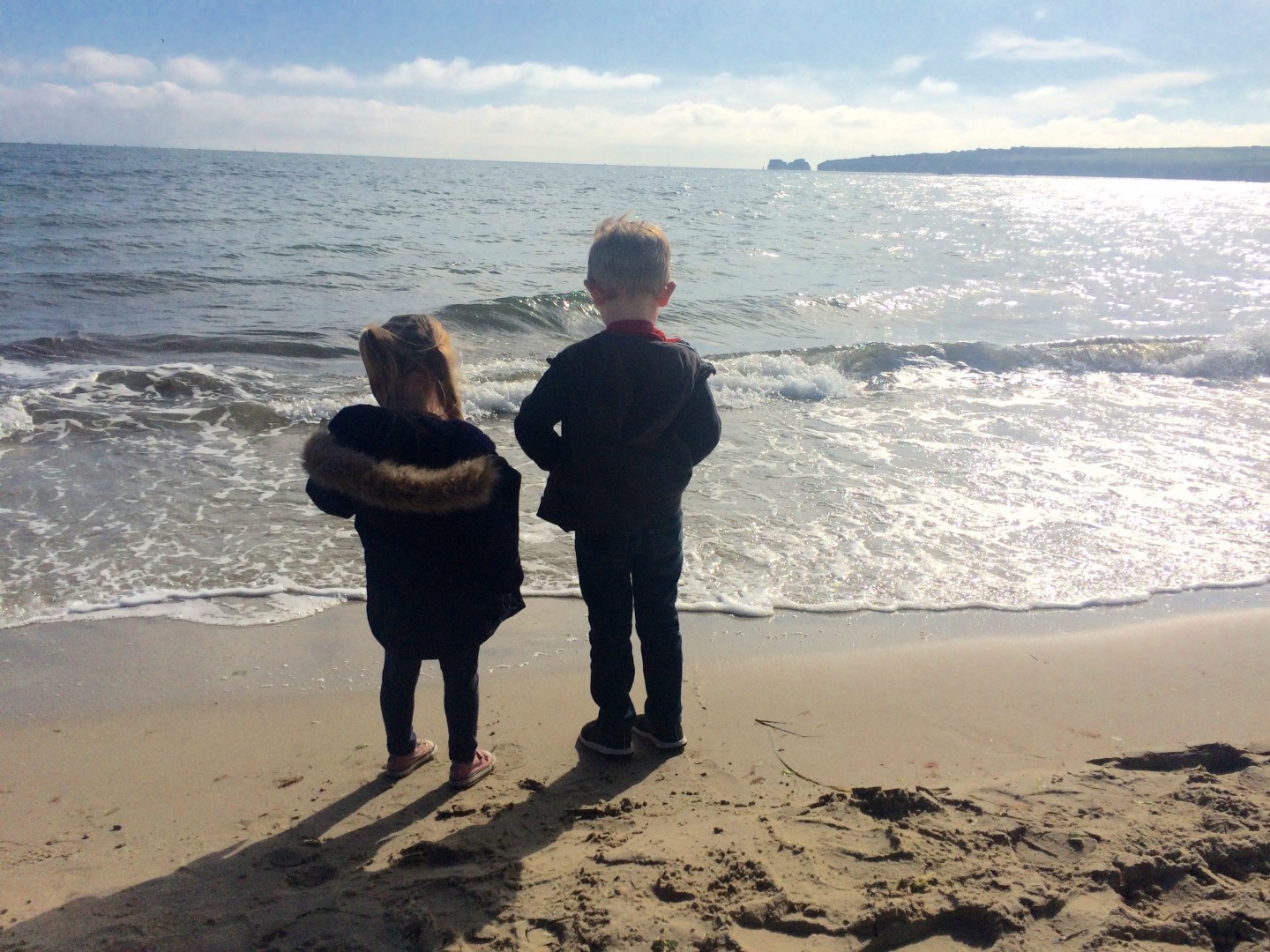 The whole place is National Trust, so it is well maintained and cared for. We let our NT membership lapse, so we had to pay to park (there are three car parks that all have access to the bay). But, of course, the rest of it is free to explore. It really is beautiful!

We seriously lucked out with the weather too, and it was gloriously sunny for pretty much all of the day. Being by the coast, though, meant that it was quite breezy – it really is a vast beach with little shelter to act as a wind breaker. The kids had their coats, and luckily, I had new fleece hoodie from Trespass to keep me warm. And keep me warm it did! 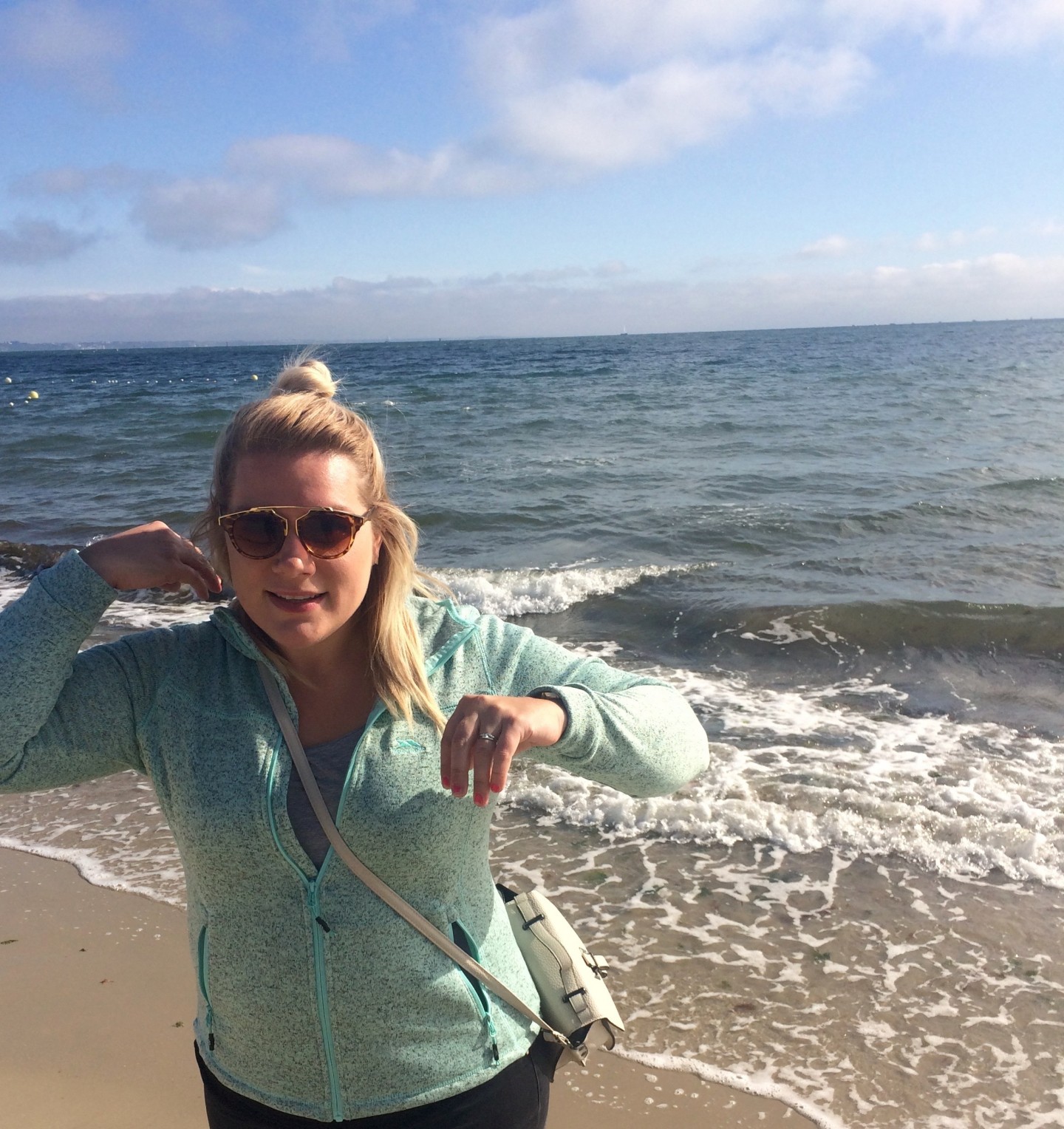 I like the colour of the fleece. I am pretty much known for living in black, so this made a nice change. It was soft, comfortable, and really did insulate me well. I took it off once we went to a pub for lunch, and hadn’t realised until then just how much it was keeping me warm.

One unique feature of the jacket is that it has airtrap fibres in it, that are designed to keep heat in as you move around.

So basically, the more active you are, the warmer you will be.

We were walking up and down the beach, as well as walking the five mile round trip to the actual Old Harry Rocks, so I really did feel this doing just that. I was kept so warm, especially up on the high cliff tops. If you’re after a jacket to keep you warm that isn’t a coat, this would make a great option. It would work well as a mid-layer too, for things like skiing, if you want to be extra toasty. 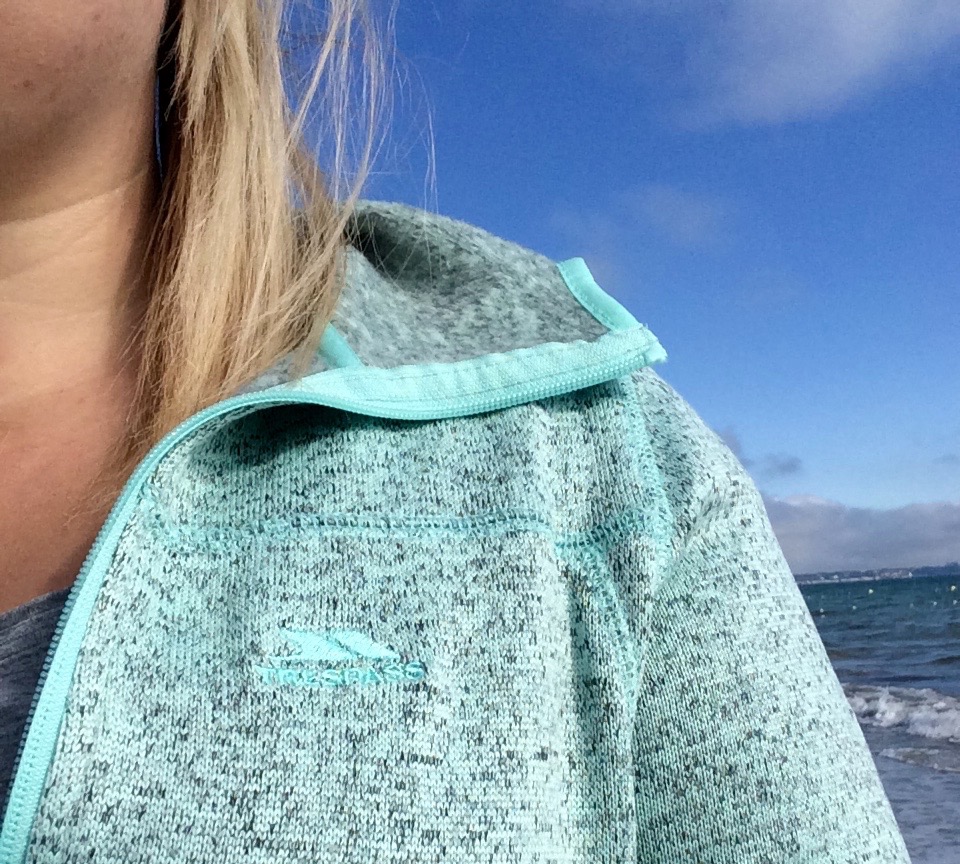 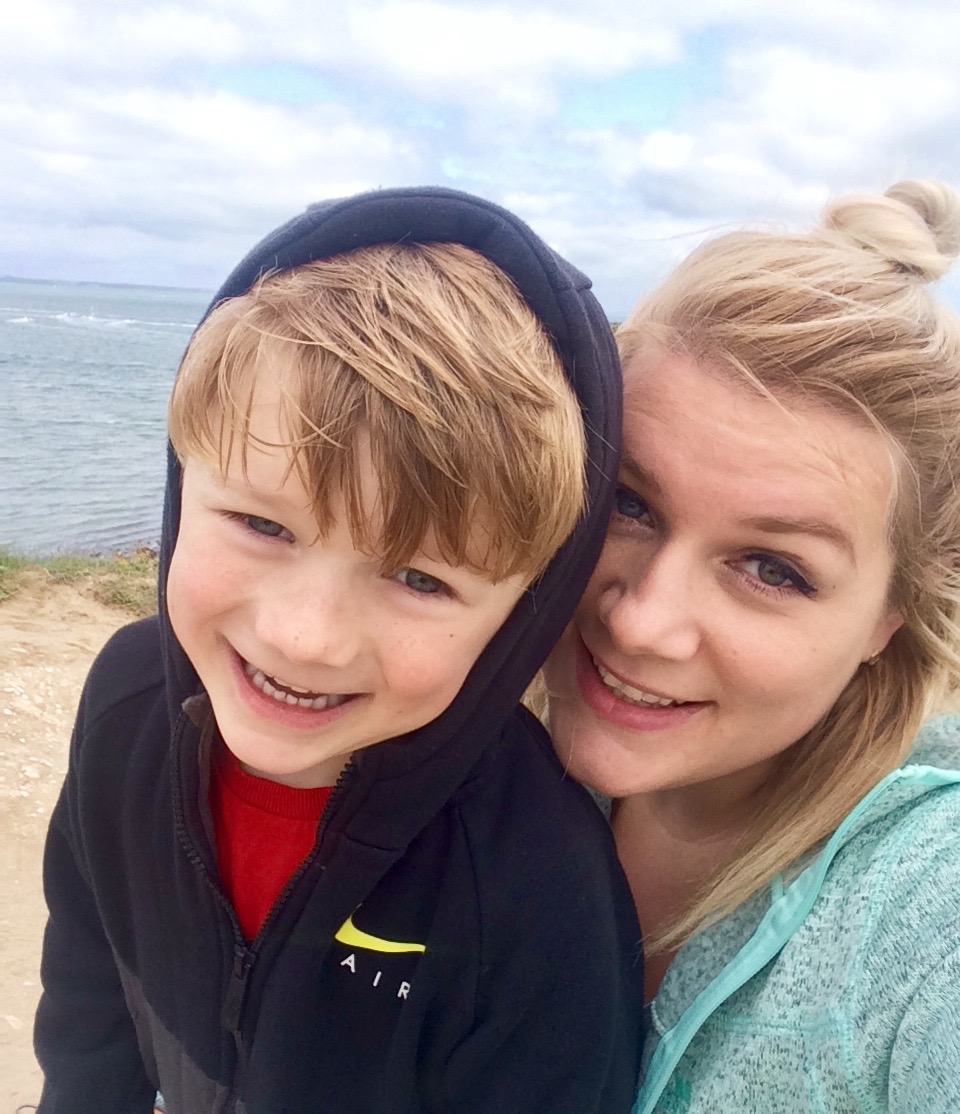 Another feature that I liked about the jacket was that it had zip pockets. I do like to put my hands in my pockets when walking around, but I also like that I could put my phone in there and not have to worry about it falling out onto the sand.

It was light to pack, light to wear, but did the job of keeping me warm. Plus a hood is always good for a day out in the UK; you never quite know when there is going to be some rain! 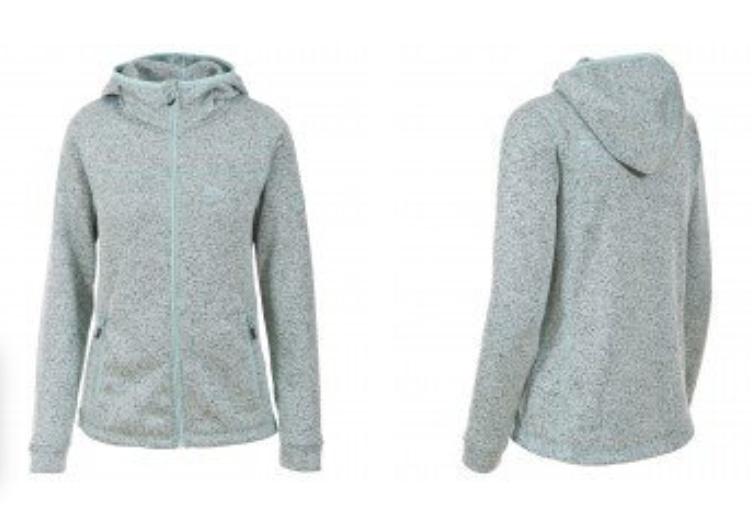 Have you got any Trespass clothing? I would really recommend this jacket – its a pretty good price for what you get too.

*the fleece was gifted in exchange for an honest review. All opinions are my own.