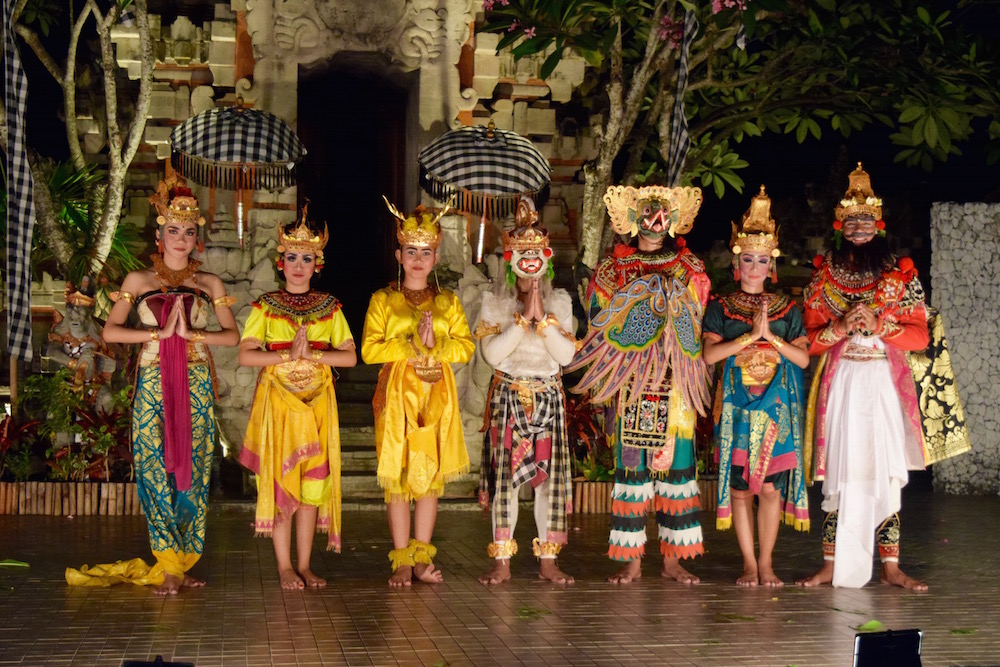 On our recent trip to Bali, we split up our time in three destinations. The first of which was the more relaxed luxury beach part of the island called Nusa Dua, down right at the south east of the island. It is a really private location, with the government owning the land and the hotels renting it from them. So there are security checks in and out of it, which was something really new. Basically, unless you are staying in one of the hotels, then you can’t just wander around. So while you do get to enjoy some of the culture, it is definitely a place to relax, soak up the sun, and enjoy the beach and water-sports.

While the pool and beach played a big part in what we did for that first week, there are still plenty of sights and attractions to pass your time. Some based in Nusa Dua, some within a short driving distance. There are taxis everywhere, and they’re pretty cheap (if you get the Bluebird ones anyway), so you can easily get around.

Here are some of the things that we did when we stayed in Nusa Dua, that I’d totally recommend for you to do too. It would be great to hear what you think. 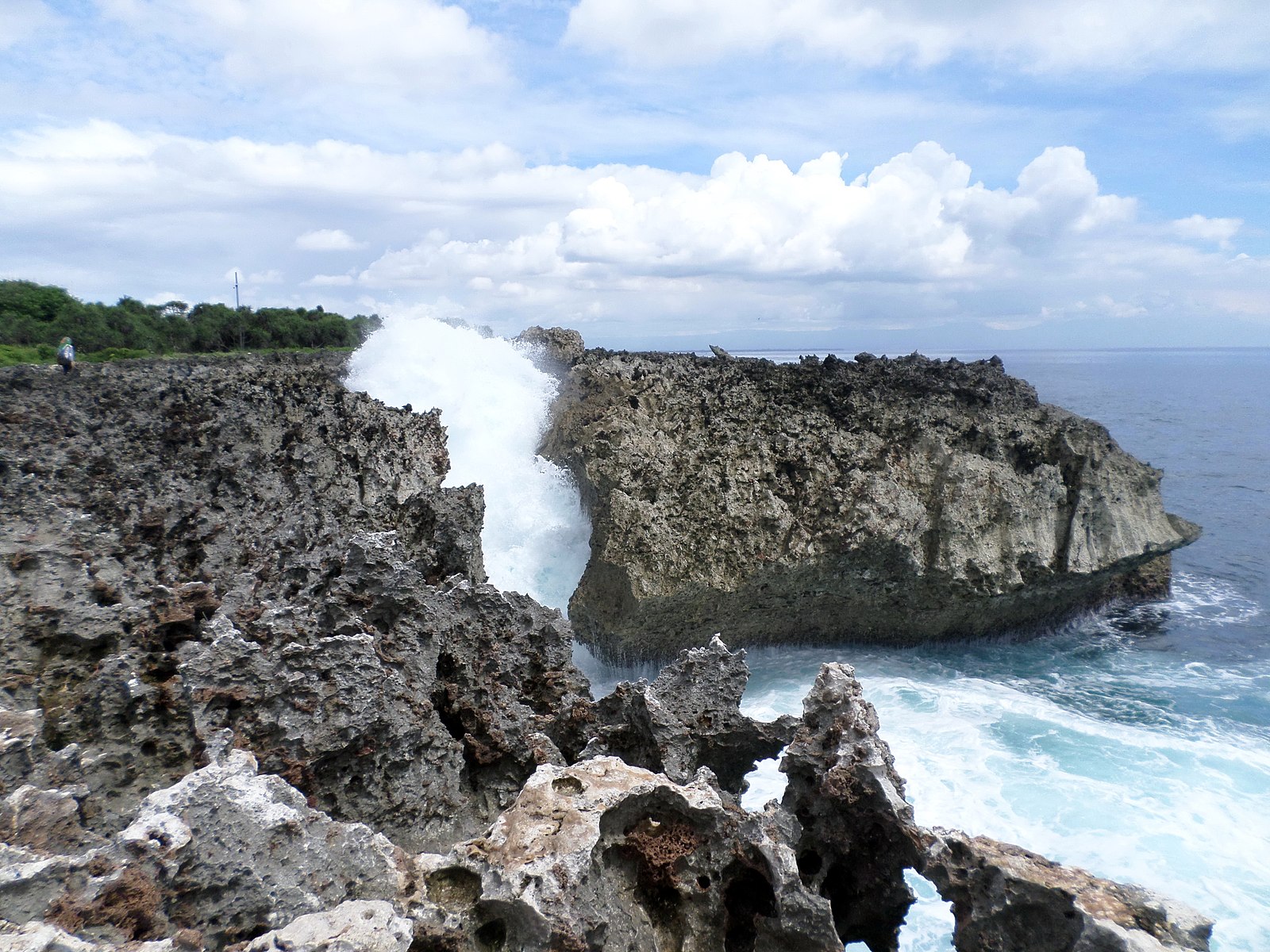 Waterblow is a completely natural feature in the face of a rock, and as the name suggests, you get to see water erupt really high up into the air when it hits the rock. It is marked on Google maps, but it is right by the Grand Hyatt hotel in Nusa Dua. It can be pretty powerful, though, so don’t get too close. In fact, there were signs up when we were there saying that you should get any closer because of the strength of the water. So keep little ones close by! It is a pretty epic sight to behold.

Shopping isn’t normally on the list of things to do with little ones. But Bali Collection, an  outdoor strip mall, is pretty epic. It is really huge for starters, with a whole mix of shops and restaurants (including a Coldstone ice cream parlour, yum). I found the locals are so good with kids, though, so eating out with them and shopping with them really wasn’t any bother. Chloe even got to the point of saying “why does everyone love me” as they all want to say hi and commented on her long hair and big eyes lol.

Nusa Dua is the area of the island that is known for its water sports. From paddle boarding with little ones sat on the front, to jet skiing, it was all good. The sea is calm in the resort area, so no need to stress out about water sports in big waves, especailly with kids; it is really calm. 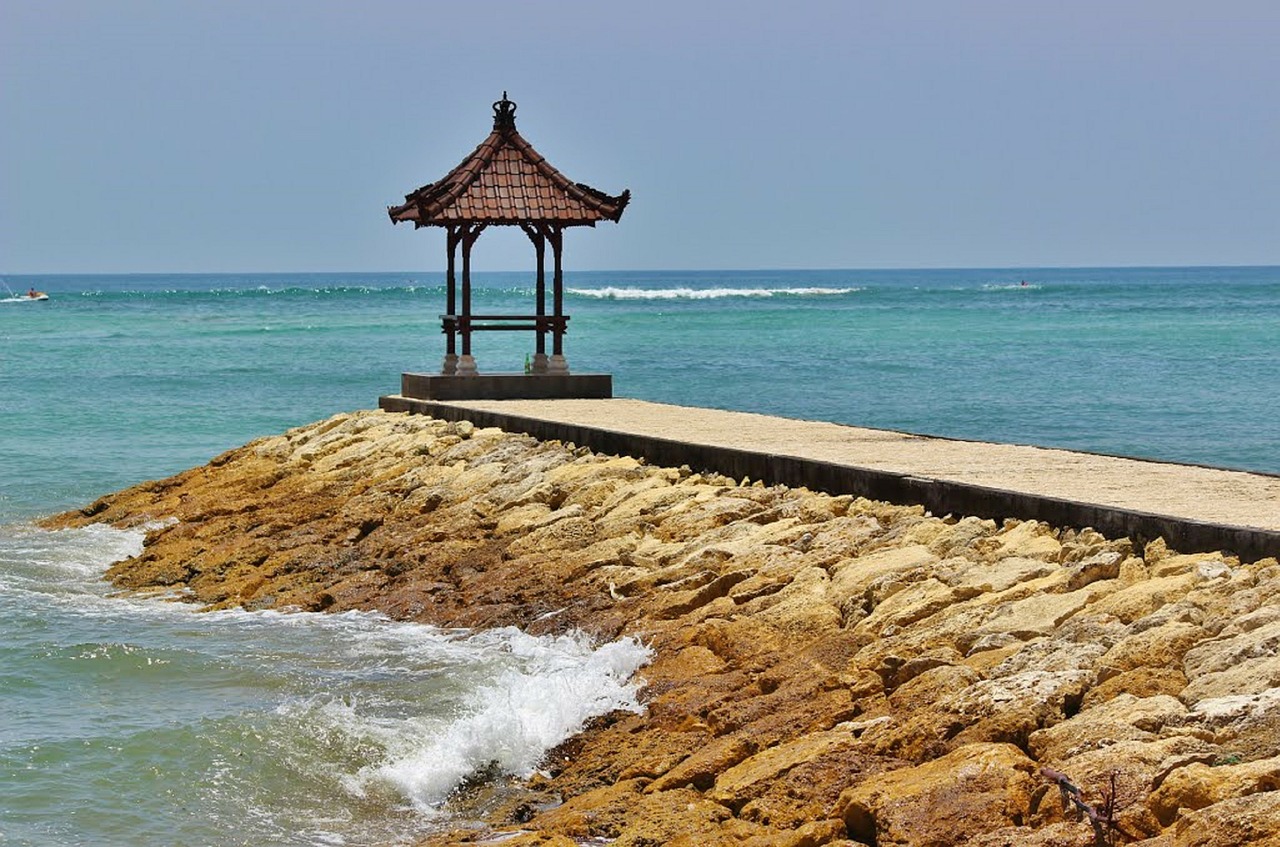 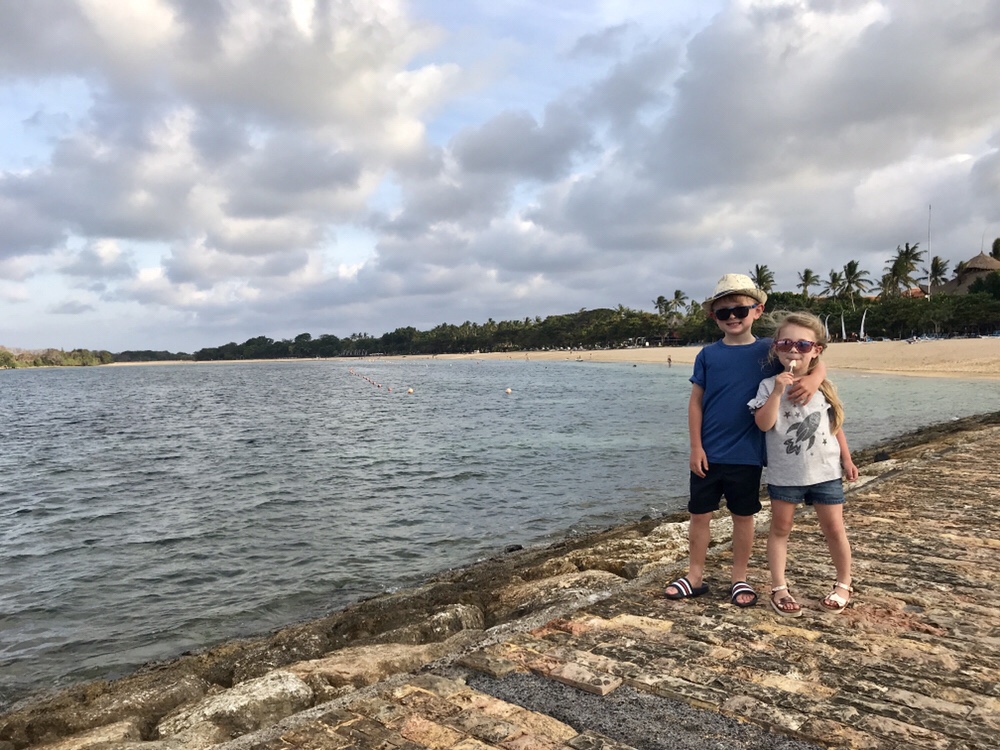 Close by to where were were staying is the promenade, that goes all along the beachfront, and juts out into the sea slightly. It is great for a walk out and to see what else is around. I did a sunrise yoga class ones morning at 6.30am, and it was really packed out on the promenade. More people tend to go early in the morning when the heat isn’t at its peak. We did it closer to the evening, as the sun sets at around 6.30pm, pretty much all year round. 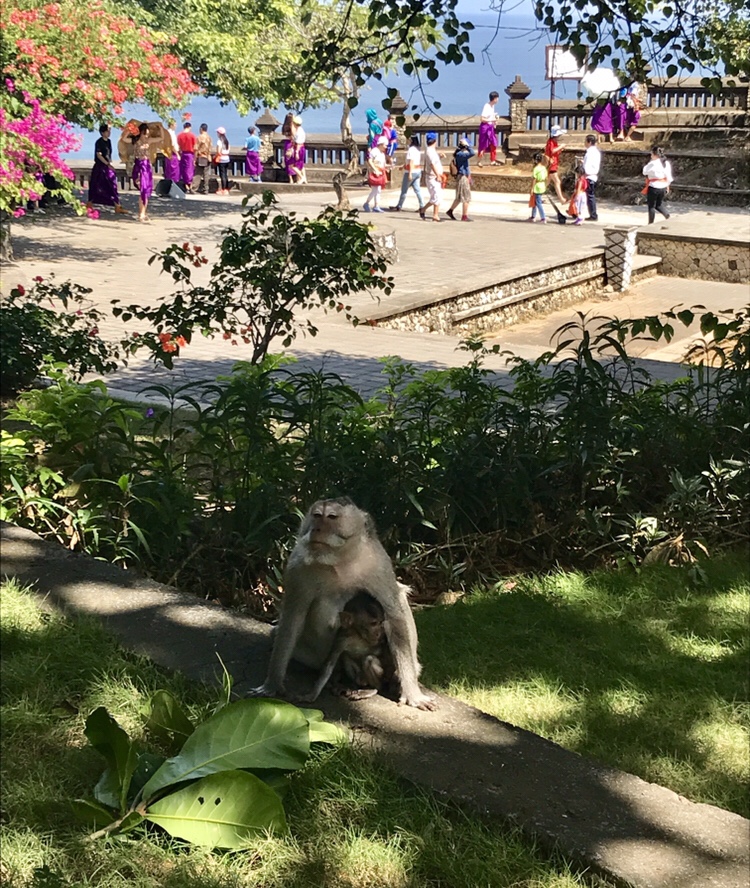 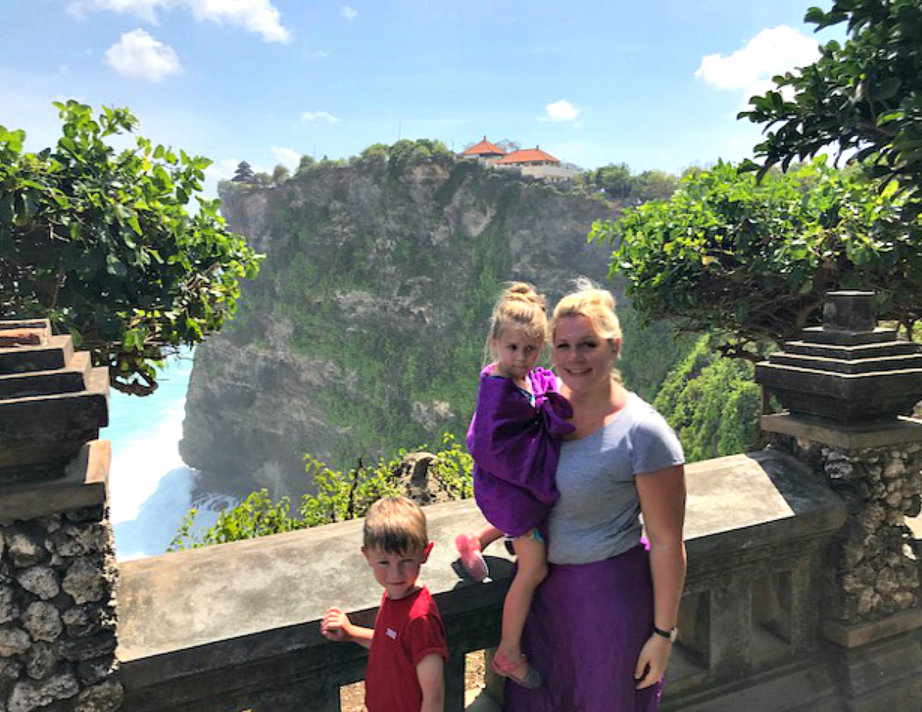 One thing that really took my by surprise is just how religious the country is. Indonesia is predominately Muslim, but Bali is predominately Hindu. Every house has a small temple are in the front of it, which is pretty cool to see, as well as there being more formal temples all around. One of the ones we went to was the Uluwatu Temple, around 30 minute drive from Nusa Dua. It is huge and set on a cliff top; really stunning views. There are monkeys in the area too that can be a little cheeky. So don’t have things like sunglasses on or food loose, as they will just grab it off you. We saw this happen a couple of times. Other than that, the kids loved being so up close to the monkeys.

Side note is that if you are a woman on your period you can’t go in the temples, and you need to be wearing clothing past your knees. It is boiling hot there so they do give you sarongs to cover up if you need them. 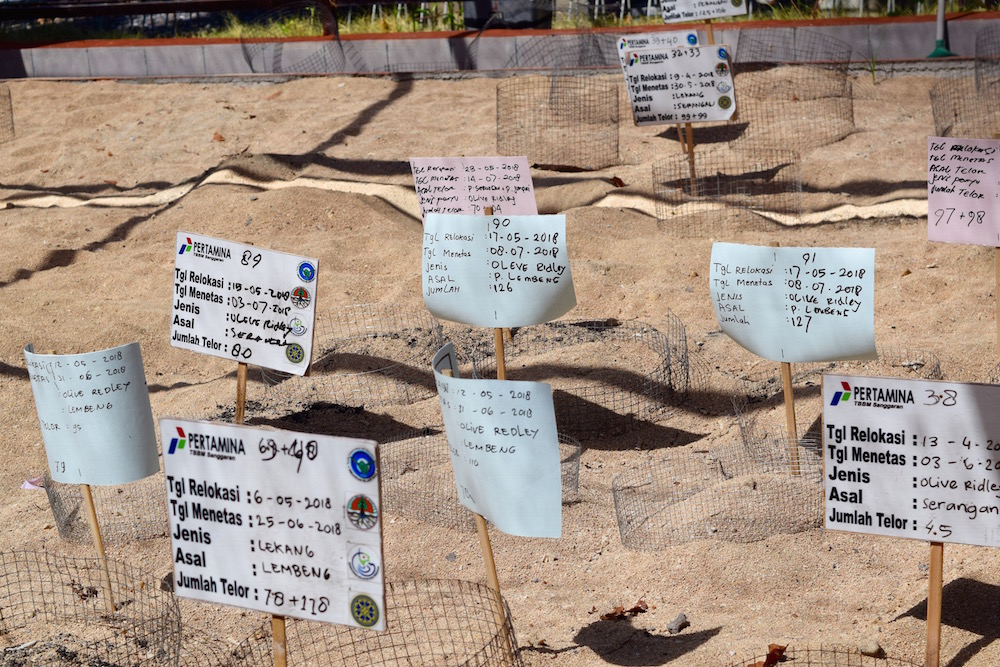 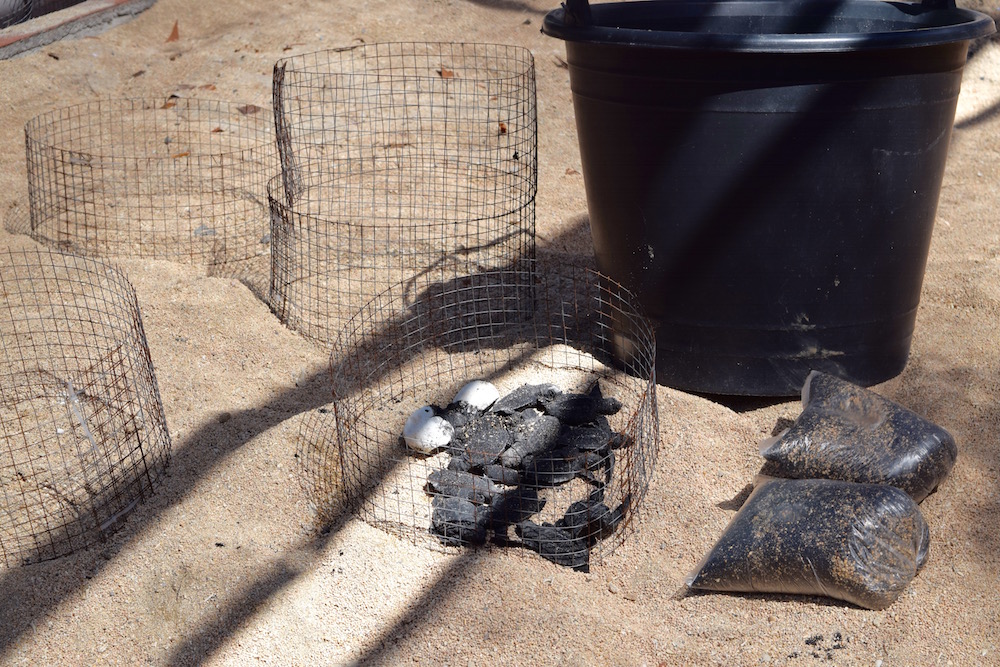 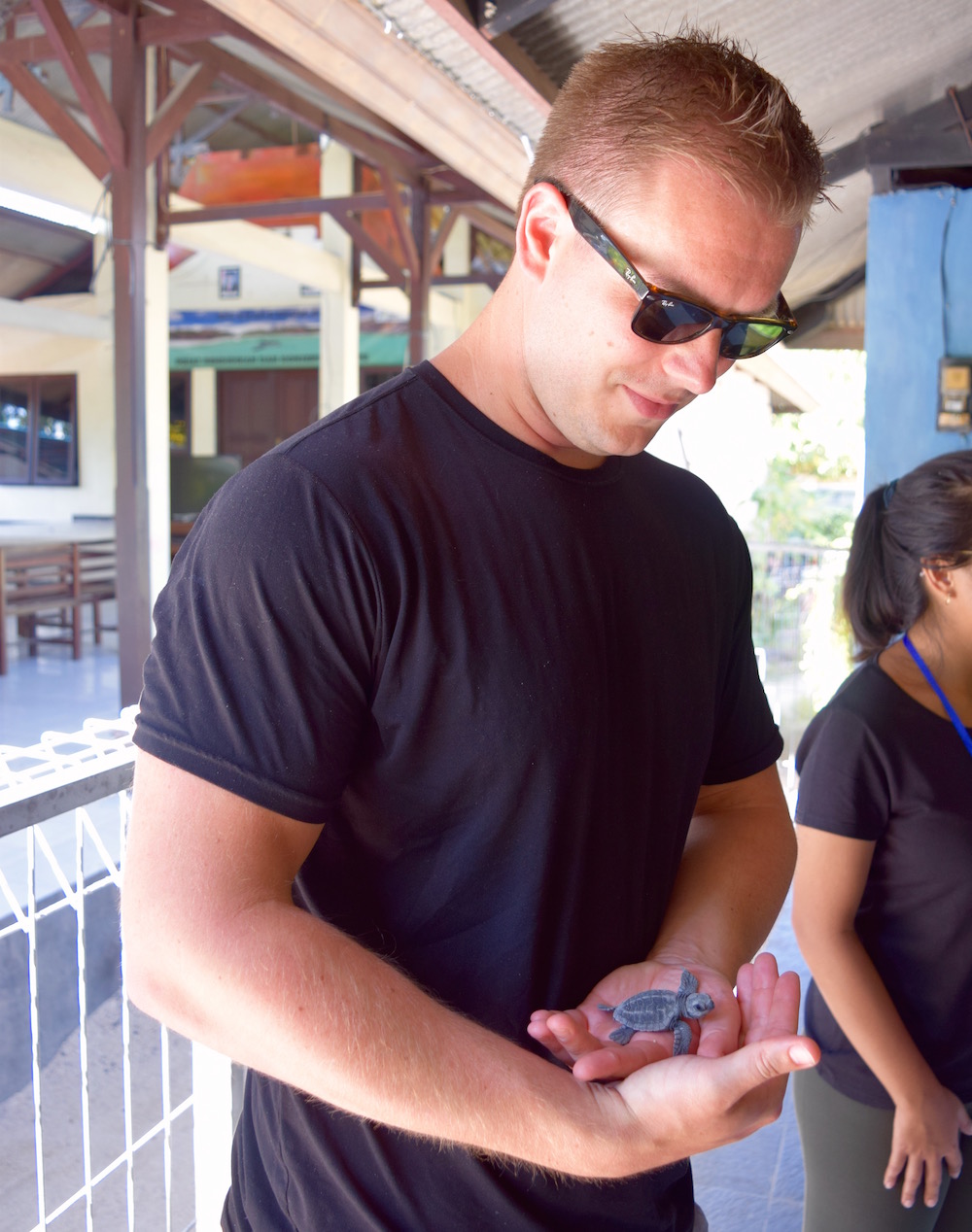 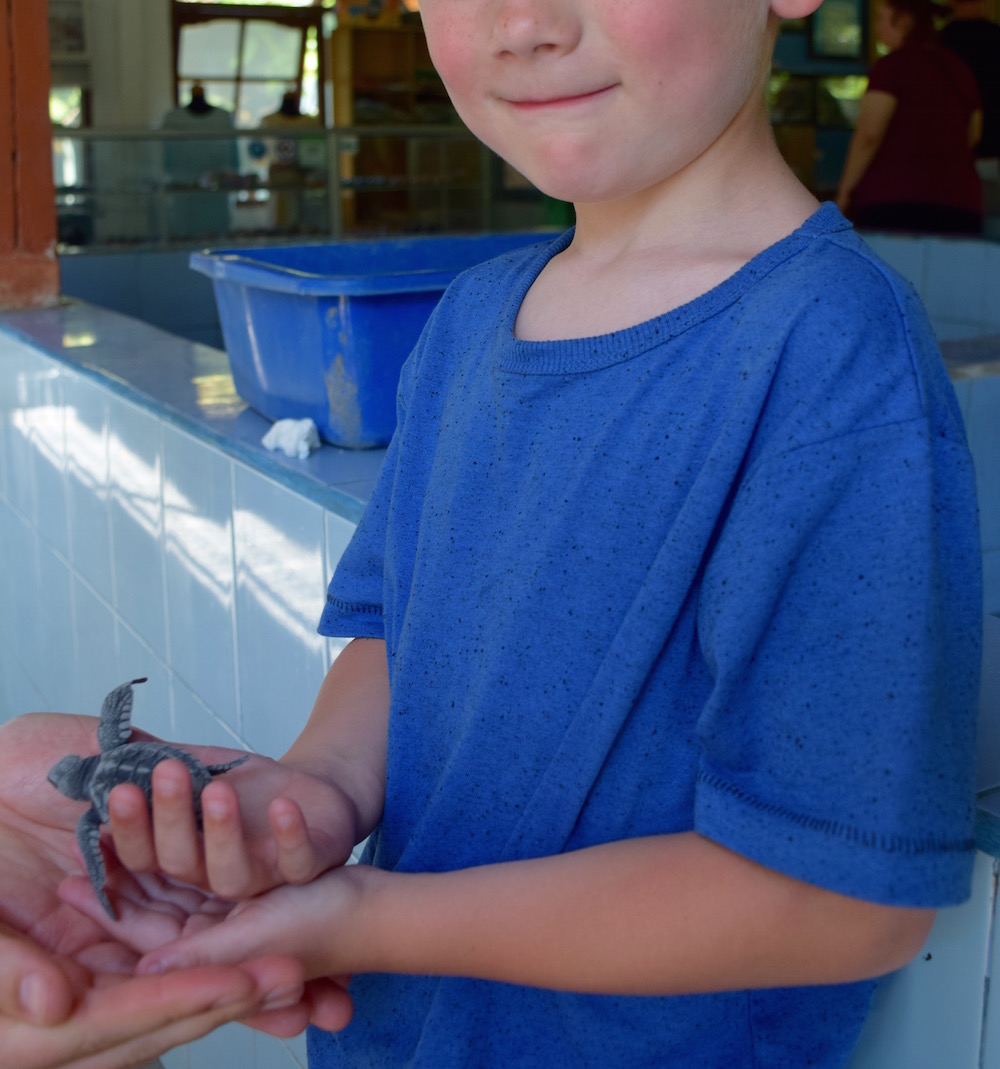 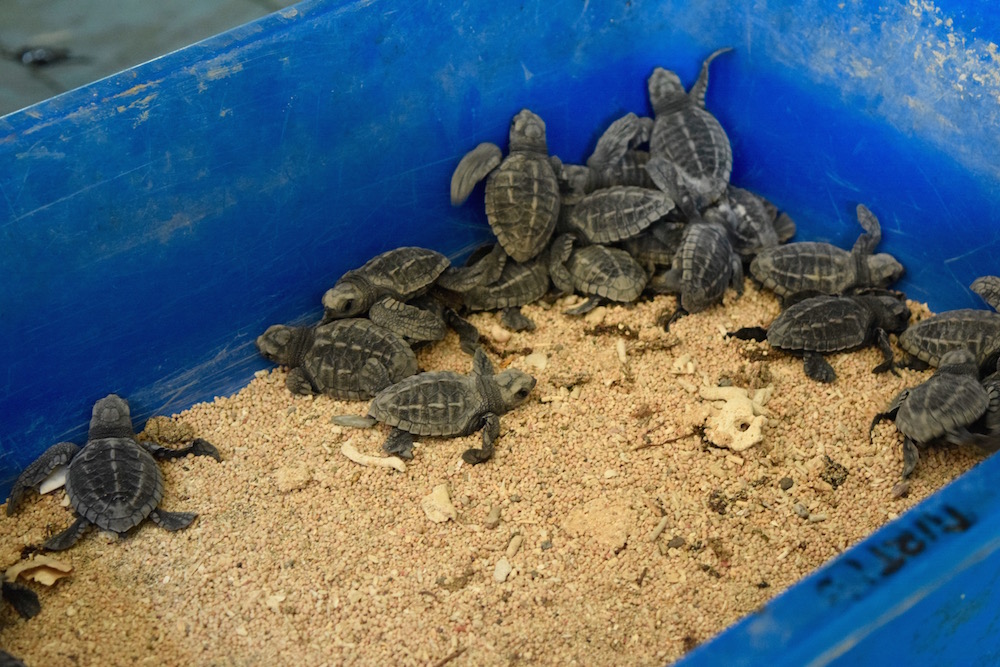 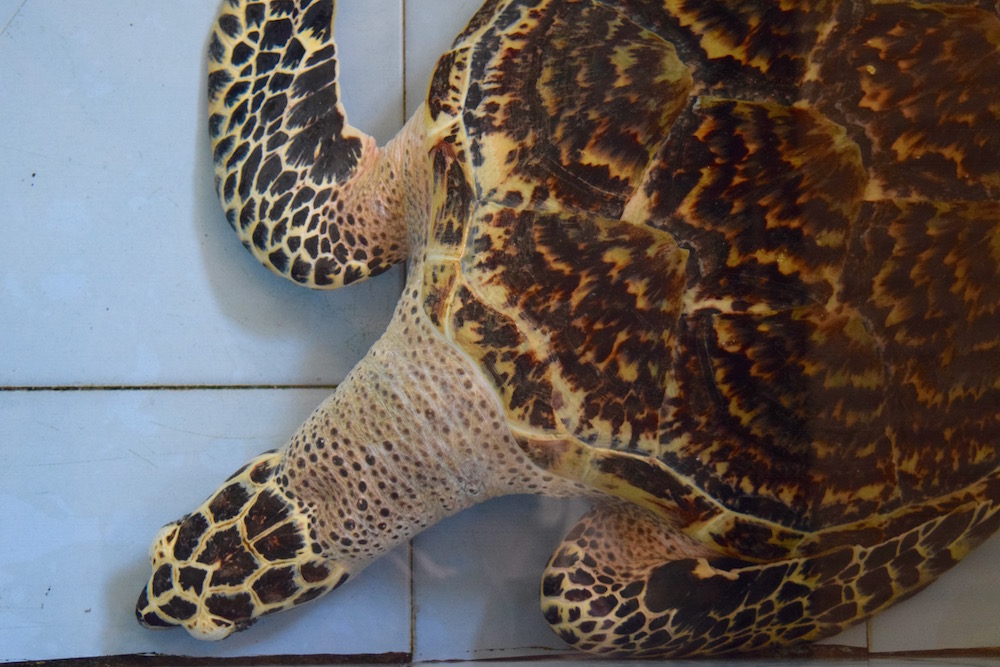 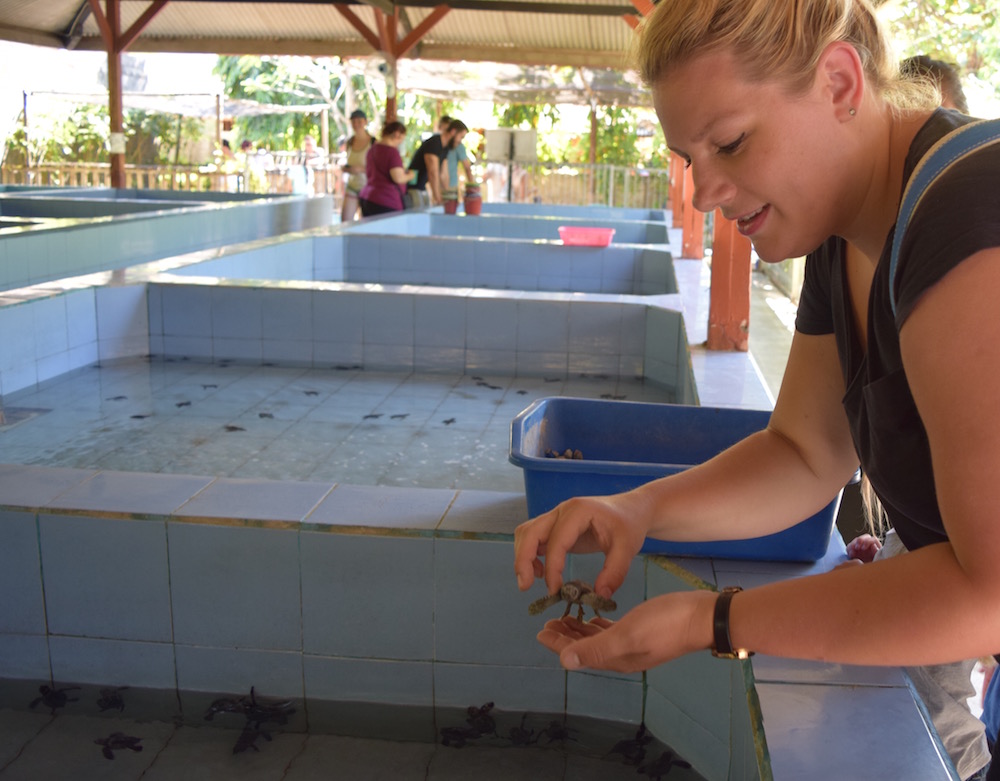 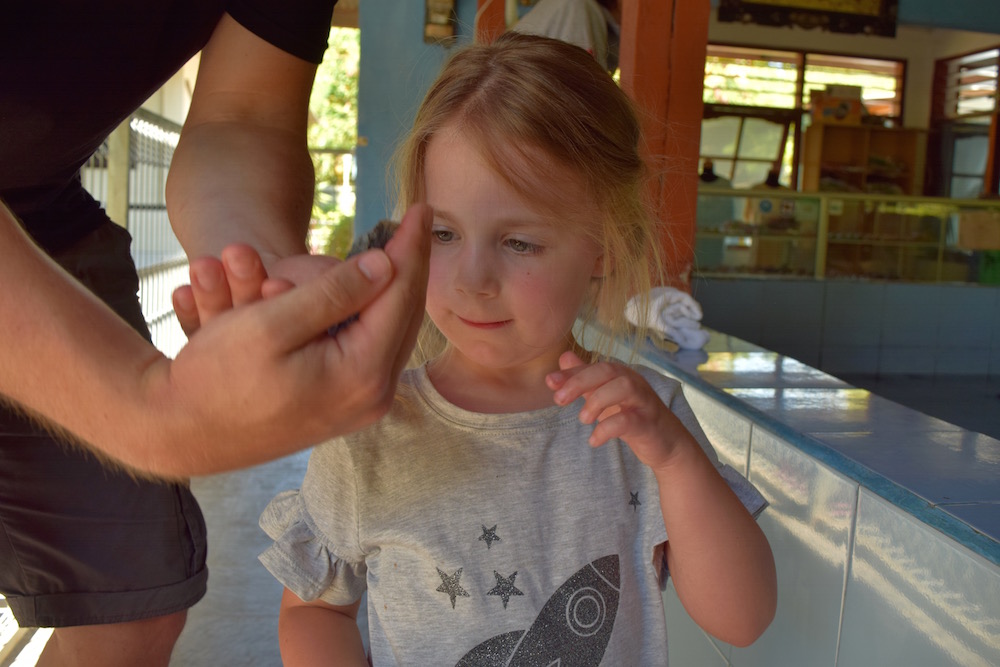 I think this was one of my favourite things on the whole of the trip, as it was something really different. The turtle conservation centre is in Denpasar, about twenty minute drive from Nusa Dua (not to be confused with Turtle Island that involves a boat and has terrible reviews). The centre is free to visit, and you get a personal tour of the centre and learn about the different types of turtles that they have. It is sad to see how some of them are so endangered, as one breed eats jellyfish, but confuses plastic bags as jellyfish. There were turtles of all shapes and sizes.

The cutest things was the hatching area, some had just been hatched when we were there, and you can release them into a pool. You can also adopt a health turtle and release into the wild. They just ask for a donation. You could feed some of the turtles too. It was a really cool experience and we all enjoyed it. 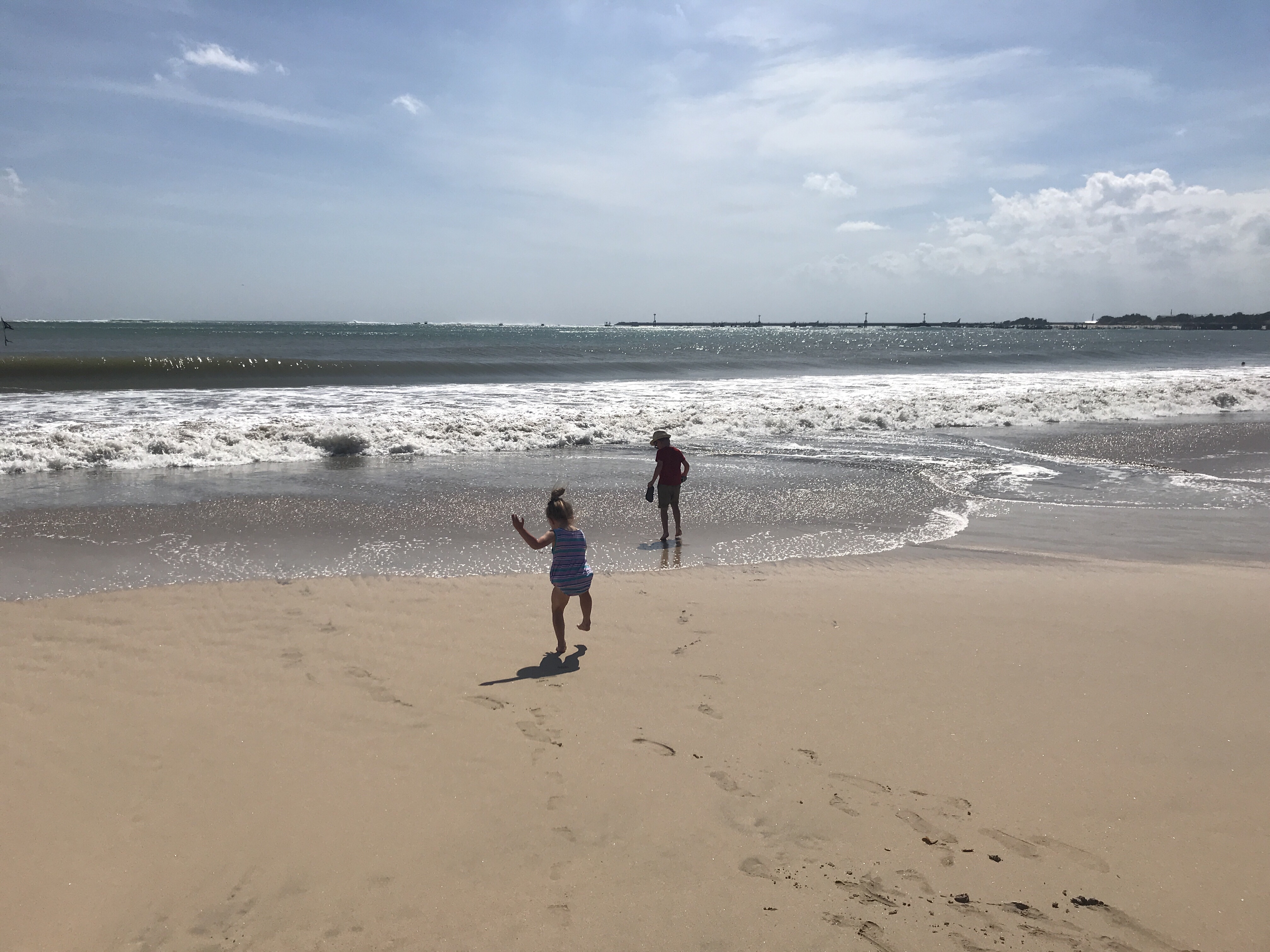 This beach is pretty close to the airport, and you can see planes taking off and landing in the distance. But it is a huge beach that is really quiet. We were driving past and our driver suggested we stop off there, and I’m glad we did. Though we were really ill-prepared and had no swimming things with us, the waves are much bigger here, so are good for surfing and paddle boarding, or just getting wet and splashing around. 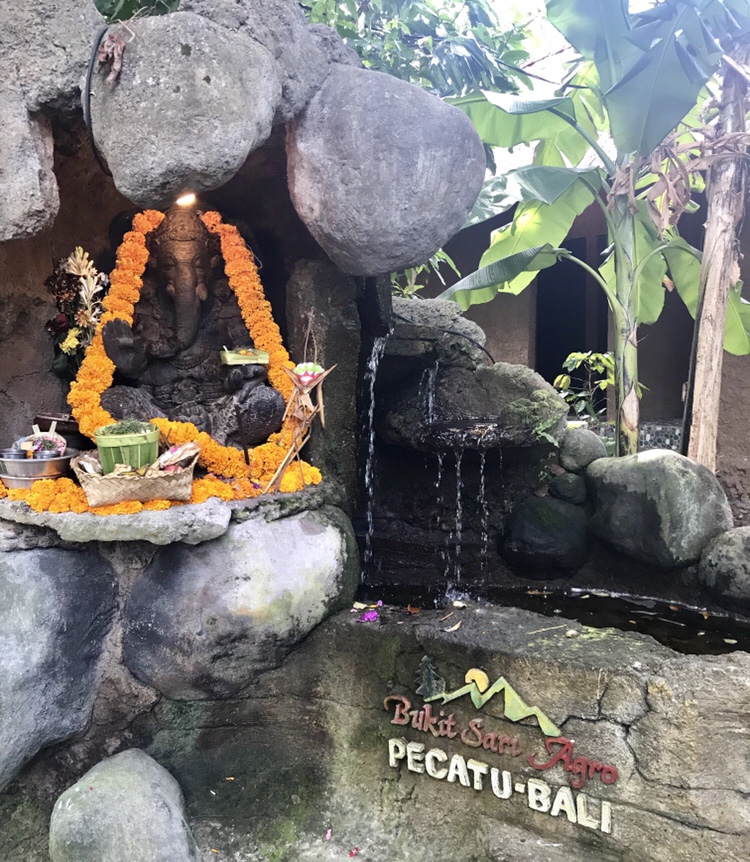 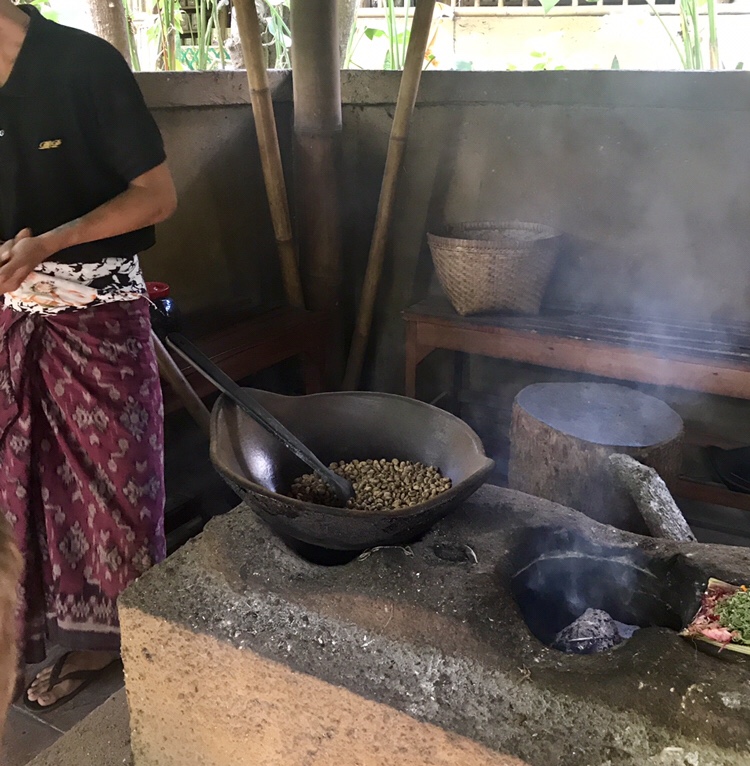 This was just somewhere that we just kind of randomly stumbled upon. But it is a place where you can get some information on the original Bali Coffee Bean. Free of charge, you can get a try to various of local herbal teas. You can try the coffee too, though I’m not a code drinker so didn’t. The flavours of the herbal teas was amazing, though! You only need about an hour or so, but it was fun, and a good way to learn more about the country. 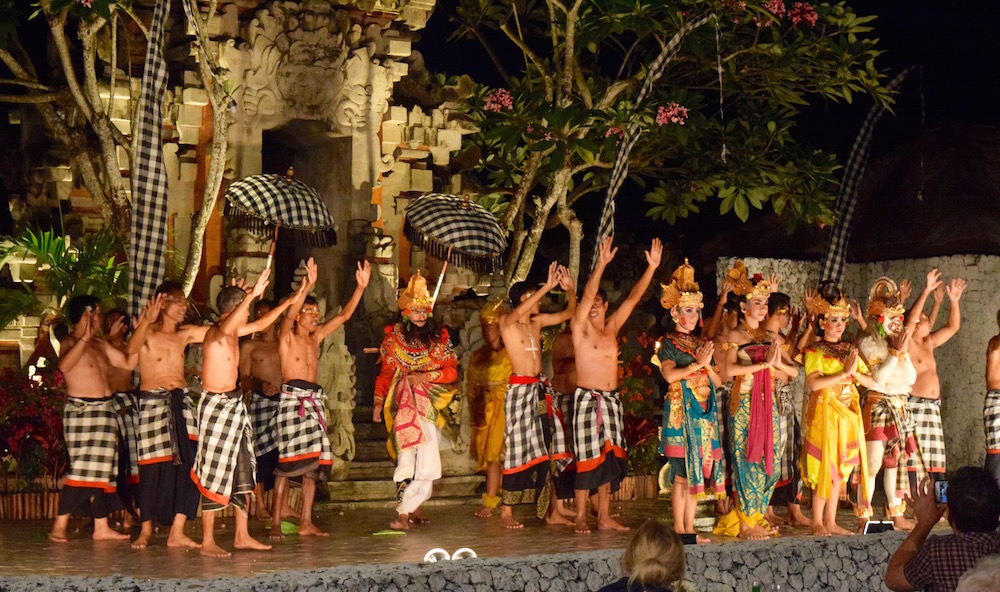 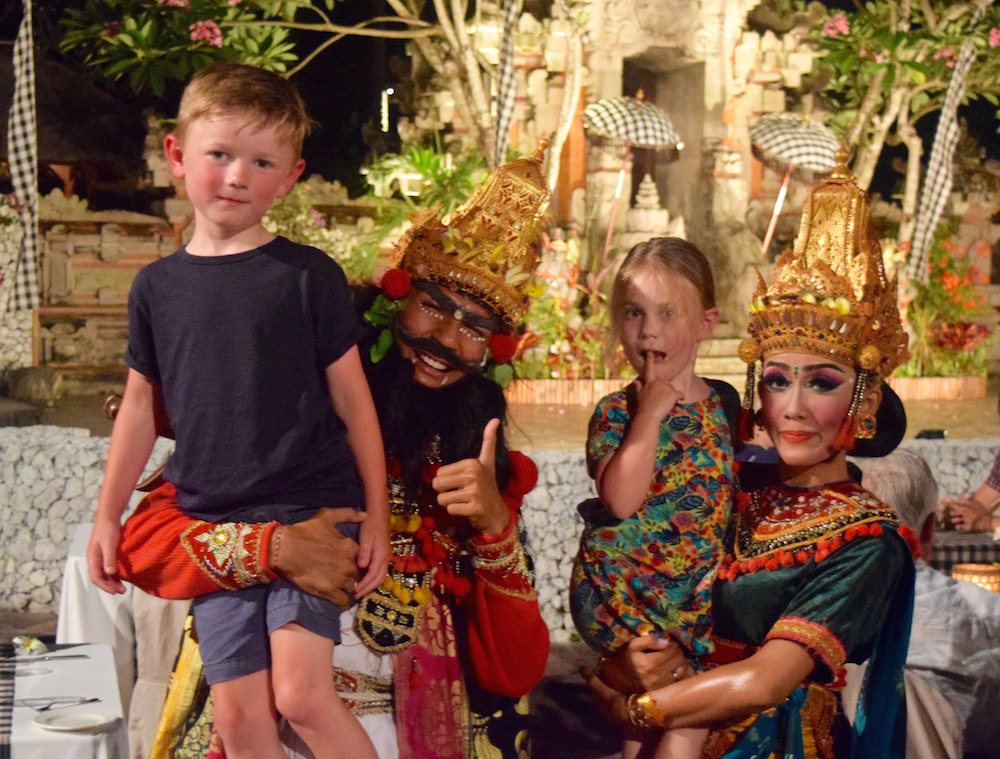 At our hotel, there was an evening of enjoying a Kecak dance show, as well as dinner. So we though that would be fun for one evening. But even if you hotel doesn’t run their own, you can see the shows locally too. The Kecak dance is the Ramayana monkey chant dance, and it is a real traditional Balinese show. It was fun, the colours were vibrant, and the music was amazing. Max says it was one of his favourite things that we did on our trip.

Have you ever been to Bali? I would completely recommend it. I know a lot of people think that it isn’t a destination for kids, but I really think it is. There is plenty to see and do and the people are so lovely towards children.