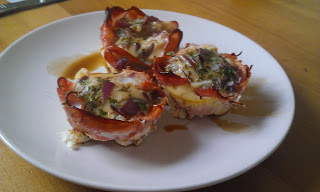 I have been following a diet similar to the Dukan Diet which is quite a high protein one so these work perfectly for that. They are really easy to make too. The original link that I found on Pinterest is here.
The original post was for bacon and egg cups but I have tried half with bacon and half with ham. I used mostly egg whites and whisked them up in a jug. I wanted to make mine like mini-omelettes so I added some onion, herbs and a little bit of red pepper, all finely chopped. I have tried these egg cups before, without adding anything else and it was quite bland so I think making it omelette style makes it much tastier. 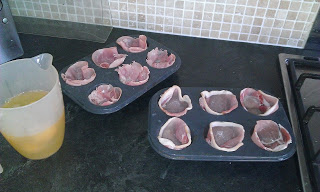 I then poured into the muffin trays that I had lined with either bacon or ham. Using a silicone muffin tray really helped the cups to come out really easily after that had been cooked so I would recommend using them. If you don’t have any, you probably need to lightly grease your muffin tray. 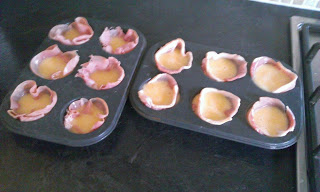 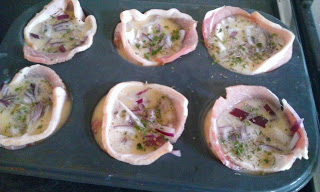 I cooked them in a pre-heated oven at 200c and they needed about 25 minutes (but keep an eye on them). I found that the bacon ones needed longer than the ham ones – I guess as bacon is thicker? 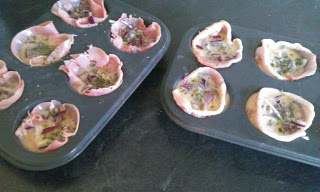 I personally preferred the ham ones, over the bacon ones but try both and see what you think.

I loooove eggs with black pepper and worcester sauce so that is what I served mine with – really yummy! 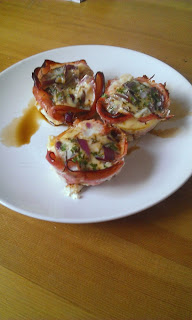