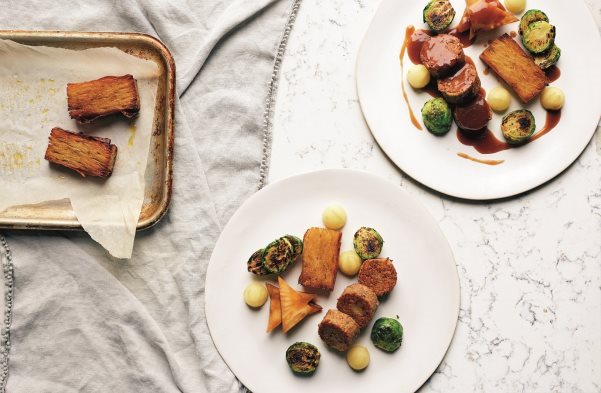 This Christmas will be my first as a vegetarian. And as we don’t normally have a roast dinner all that often, it has left me wondering what I would have with ‘all the trimmings.’ So I have been looking forward to trying out a few new things for the main dish, instead of the turkey as normal. Have you tried a nut roast before?

If you are veggie, vegan, or just want to have more than one option on the table this Christmas, then this hazelnut roast could be worth giving a go. This nut roast is very special – it really tastes of nuts, and the gravy is made using long, slow cooking methods to achieve a beautiful depth and complexity of flavour. It is a lot of work to make all the elements, but they can each be made up to three days ahead and reheated when needed. Or you can make just the nut roast and gravy and add accompaniments of your choice.

FOR THE NUT ROAST

FOR THE POTATO GALETTE

FOR THE CIDER GRAVY

FOR THE BRUSSELS SPROUTS

This is an immensely useful thing to have in the fridge. Whenever you want to add a bit of depth to a dish just sprinkle this in, cook for a few minutes, and it will make it instantly delicious.

This will keep in an airtight container in the fridge for up to 1 month.

*recipe used with permission from the book, ‘Plants Taste Better’ by Richard Buckley, £25 Jacqui Small. Photography is by Kim Lightbody.