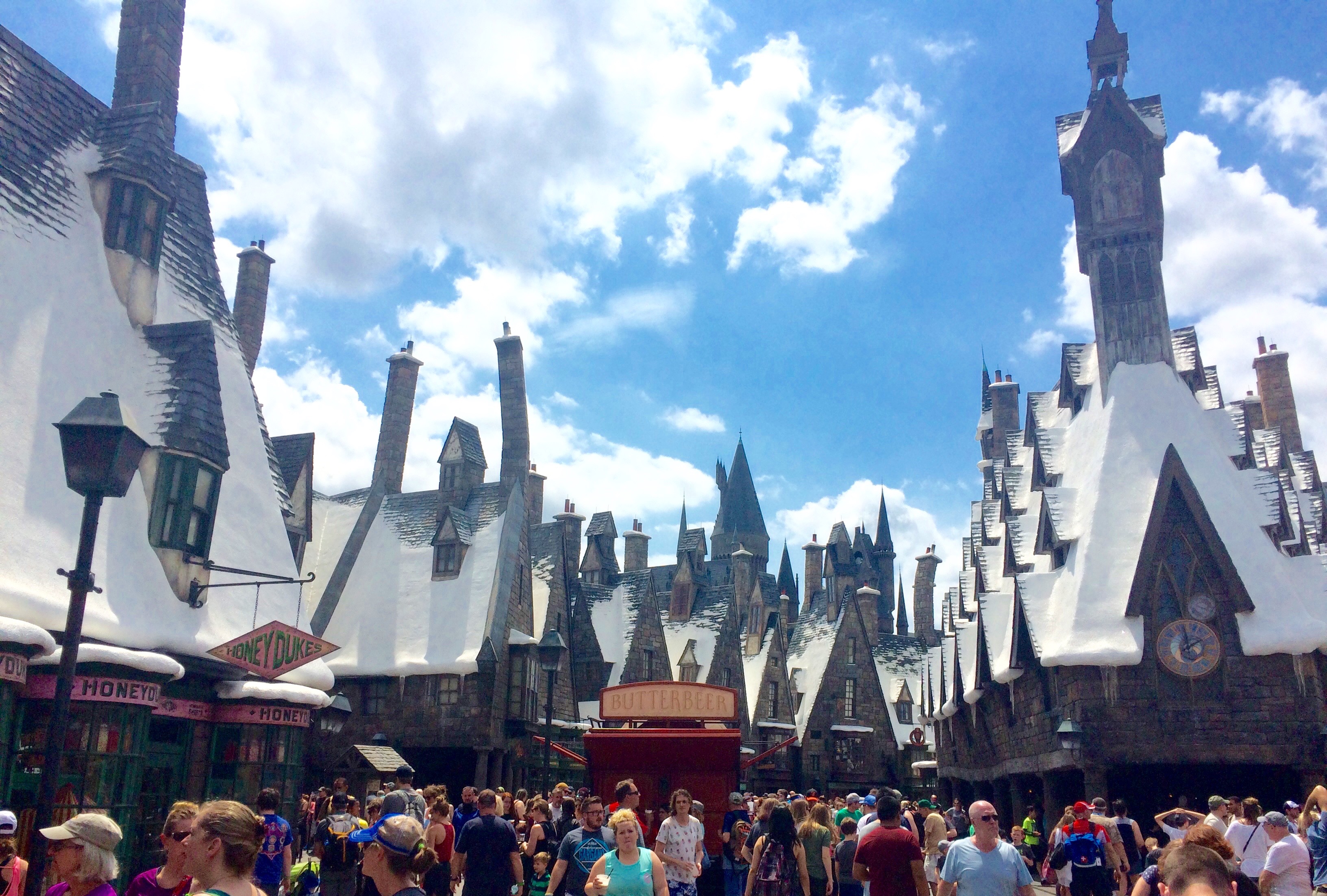 You might have read in one of my recent posts, where I shared all about our trip to Universal Orlando and my tips for making the most of a day there. It was my husband’s and my favourite park there, out of the several that we visited. So if you are planning a trip to Orlando, then Universal needs to be on the list; both the studios park and the Islands of Adventure park. But our absolute favourite part of the park was the Harry Potter areas in each park.

When we visited Orlando prior to this trip, Max was just over 18 months old. Kindly, my sister and her family that w met up with out there, looked after Max for a day and the husband and I went to Islands of Adventure for the day. To be honest, it was all for the Harry Potter section of the park, Hogsmeade. It did not disappoint; it was a really fun day! It is all set up with Hogwarts and all things Hogsmeade, such as ‘The Three Broomsticks’ and other things that relate to near Hogwarts in the books and films.

We had heard rumours from one of the staff members that there were plans to connect the two parks, Islands of Adventure and Universal Studios, by a Hogwarts Express train and a new ‘London’   and Diagon Alley area in the studios park. We were keen to see it this time and it really was worth it.

We are Harry Potter fans, so there is no getting away from that. But the two areas are done so well, I think that you don’t even have to be a massive fan to appreciate it all. I loved it so much that it deserved it’s own post – there is so much to share! 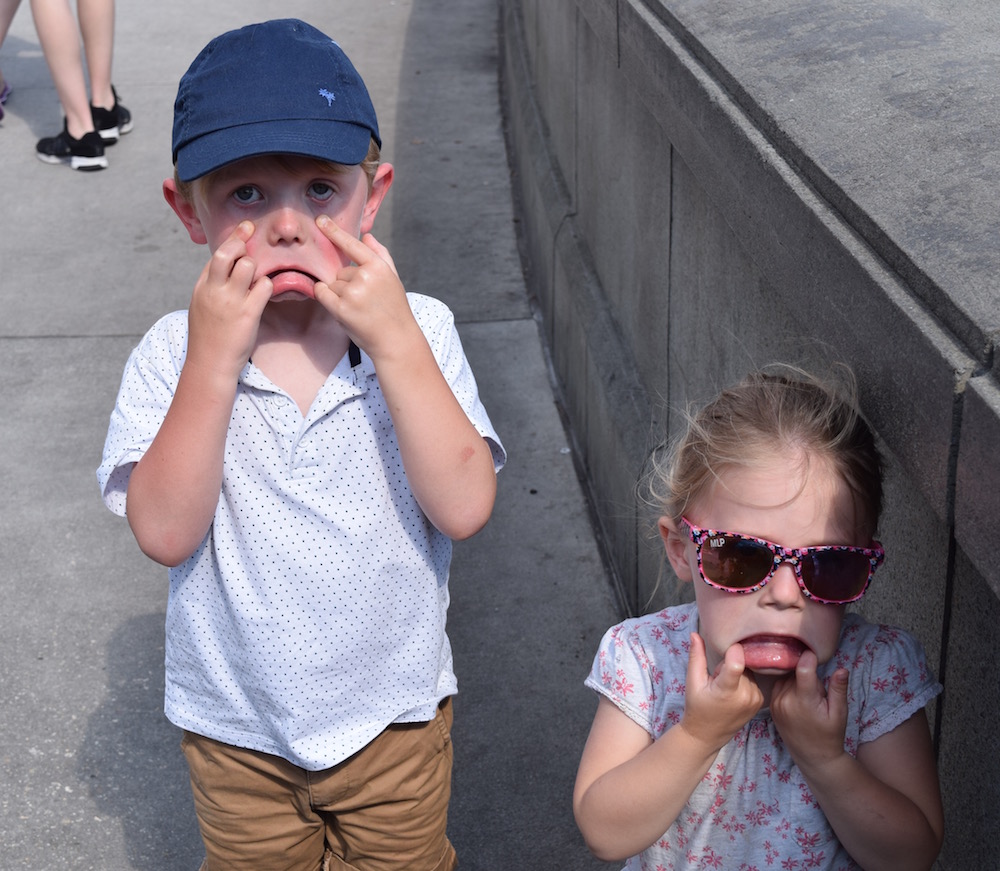 Hogsmeade in Islands of Adventure

This area of the park was the first built. It has some great rides like the main attraction, Harry Potter and the Forbidden Journey. One of the best parts about the ride is the queuing up system as you wander all through Hogwarts. The attention to detail is amazing, with so many things that you’ll recognise from the films. The portraits talk to you, including Dawn French’s fat lady portrait. Even the lighting and decor is just as you’d imagine it. The other rides are the Dragon Challenge, which is a big rollercoaster. But the family friendly ride is the Flight of the Hippogriff, which rides over Hagrid’s home. The main area has all the stores that you see in the films,  like sweets from Honeydukes and you can choose a wand at Ollivander’s. 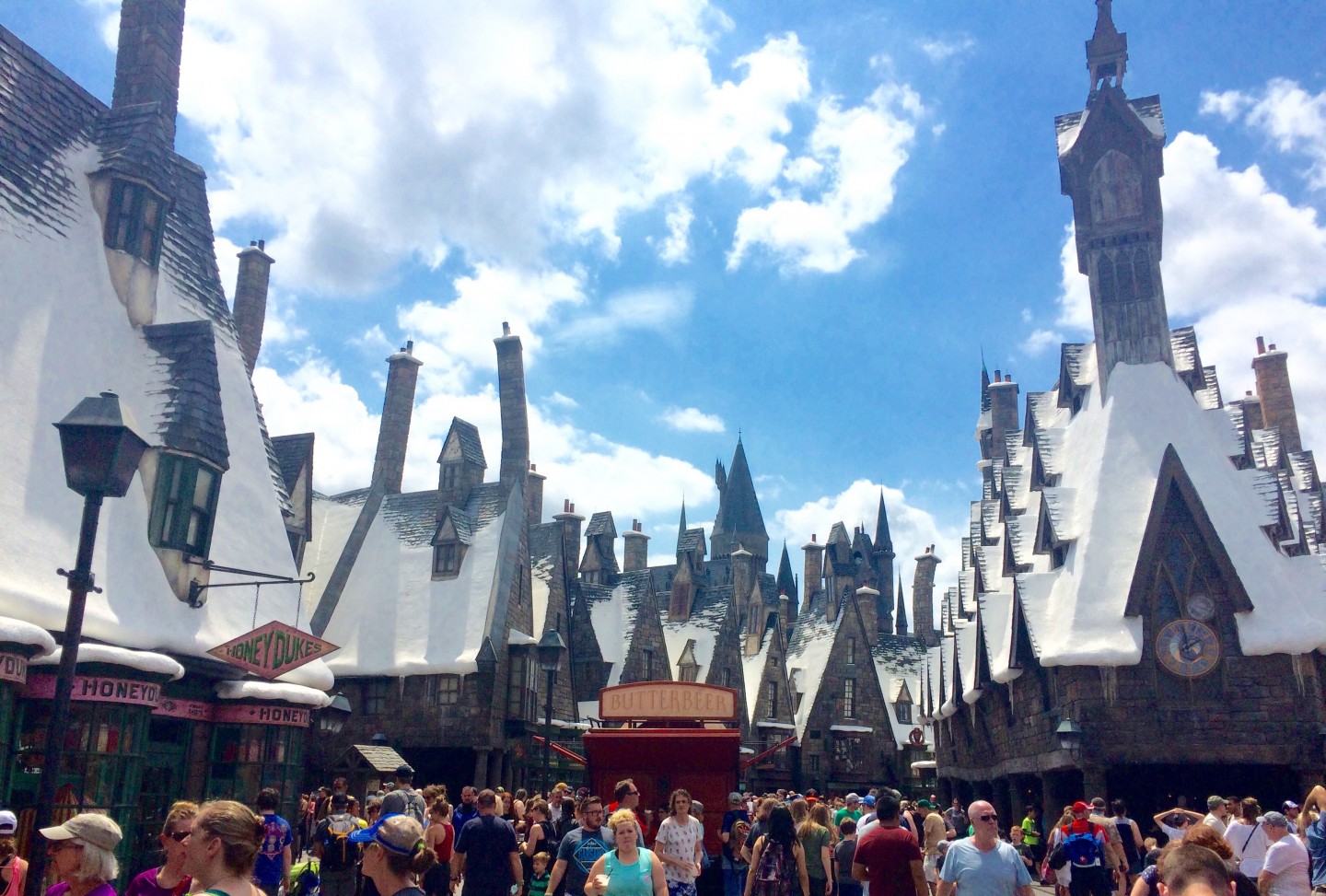 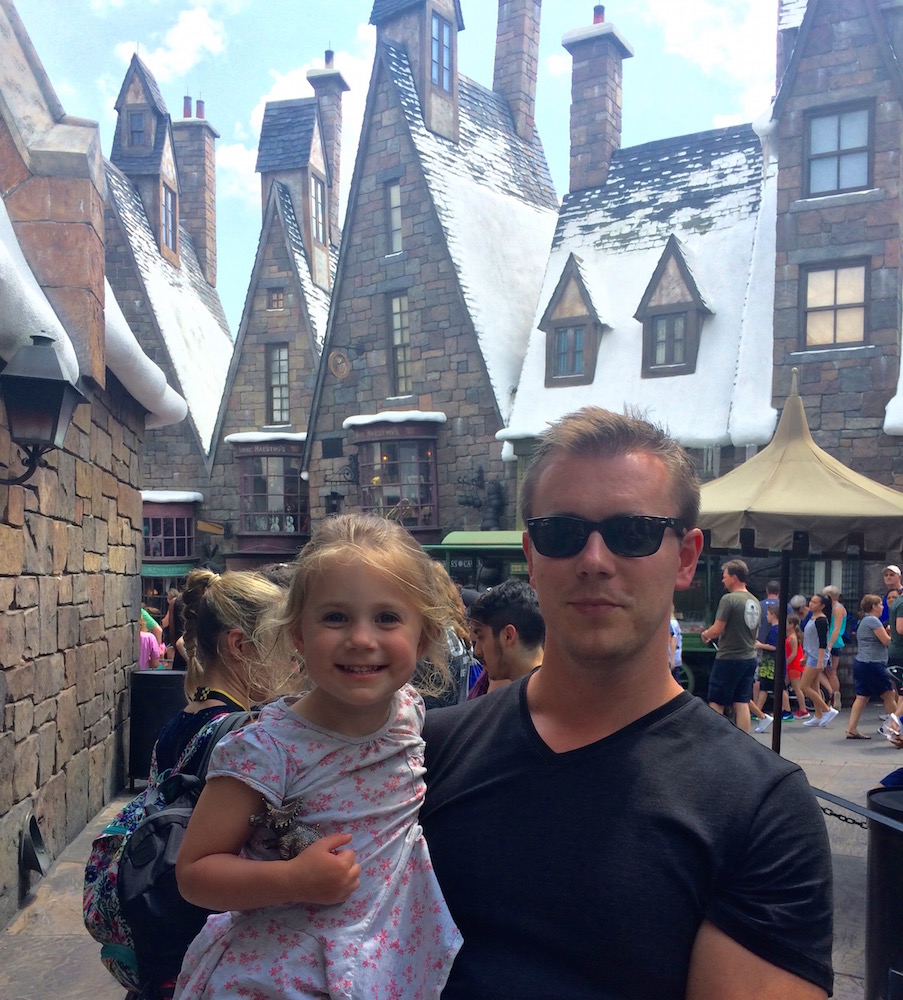 The whole atmosphere is amazing, with music from the movies playing. The shops are fun to look in, with some merchandise that you can’t get anywhere else. My top tip for that area is to get your kids some of Bertie Bott’s Every-flavour Beans. It put my kids off eating jelly beans for life, ha.

Depending which park you’re in first, you will board the train in Hogsmeade or at King’s Cross (then go to the other station in the other park). You need to have two-park (hopper) passes to be able to do this though. You can see people trying to get through as if it is a ride, but you will get turned away if you don’t have the right passes. 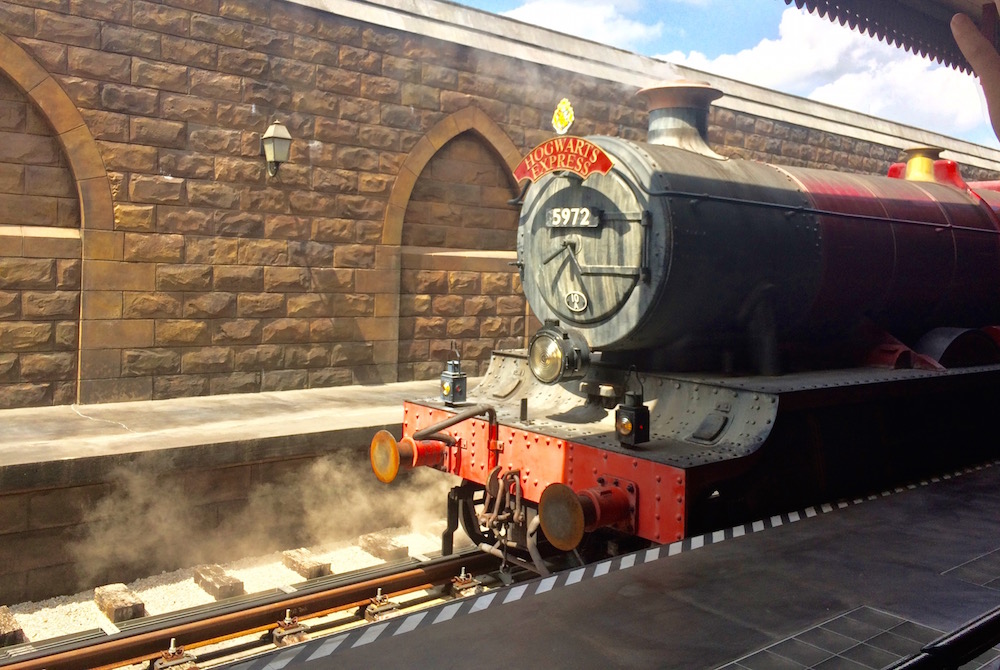 Again, I can’t praise the attention to detail enough. Even when you’re on the train, it is just like you’re in one of the films. You sit in the seats, just like they did. The doors close and there are silhouettes, voices and music, that really add to the atmosphere of it all. Outside the ‘window,’ it is simulated to be like the journey into (or out of) London. It is a really clever way of doing the ride and the kids loved it.

We took the train from Hogsmeade to King’s Cross and when we go there, it was just like arriving in the actual King’s Cross station. The detail and time they took to create it all is amazing! It even changes the ‘stroller’ parking to ‘pram’ parking, which I thought was a comical touch. The whole train across was brilliant and you can, of course, get a shot by platform 9¾.

This part, in the Universal Studios park, is the new section and it was so, so, good! It was very popular, as you might imagine, but completely worth it. I think that is the only reason we wanted to get two-park passes and it was so worth it (but there were lots of other cool things in the studios park too). As I’ve said, when you arrive, you are taken through the London part, and you leave King’s Cross station. You can see the Knight bus and Leicester Square station too. Then you wander through a back alley, quite literally, and discover the amazement of Diagon Alley!

There is another Ollivander’s wand shop there, as well as all the shops that you see in the movies when Harry heads there with Hagrid. We grabbed a butterbeer in the Leaky Caludron; a must! They do have other food and I was quite impressed that they are all British-style foods like pie and mash, so I can see why Americans find it even more fascinating. There are more shops in this part than Hogsmeade, but they are fun to look in, and you can even find that ‘dark’ part of Diagon Alley, from when Harry says it wrong and ends up in the dodgy part of town. There is also entertainment and singers in the ‘street.’ The whole thing is so much fun! 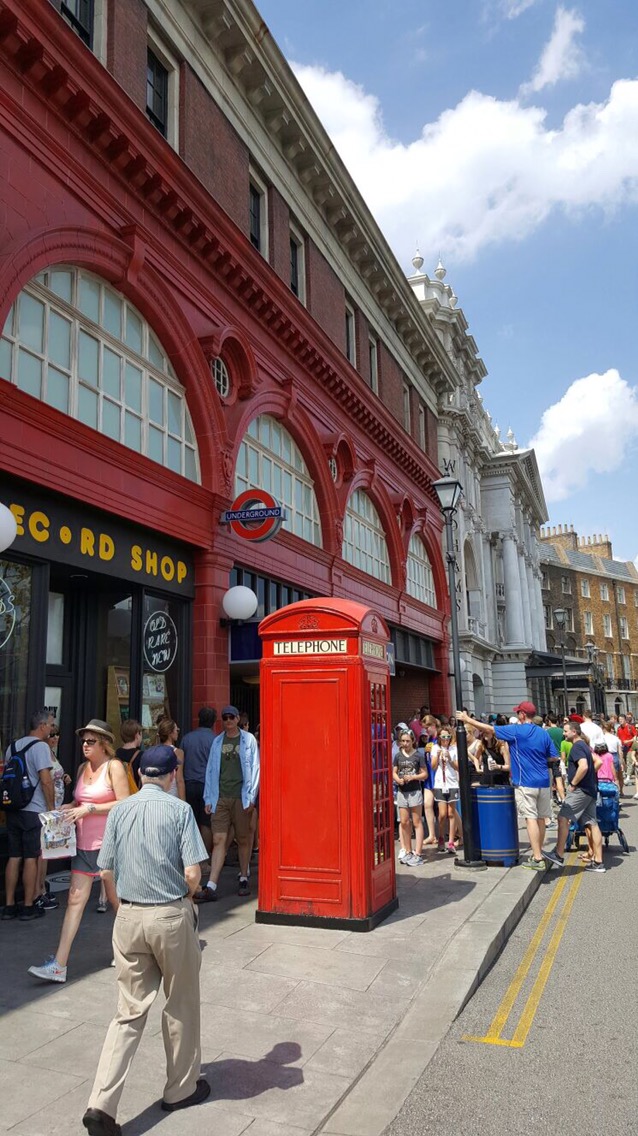 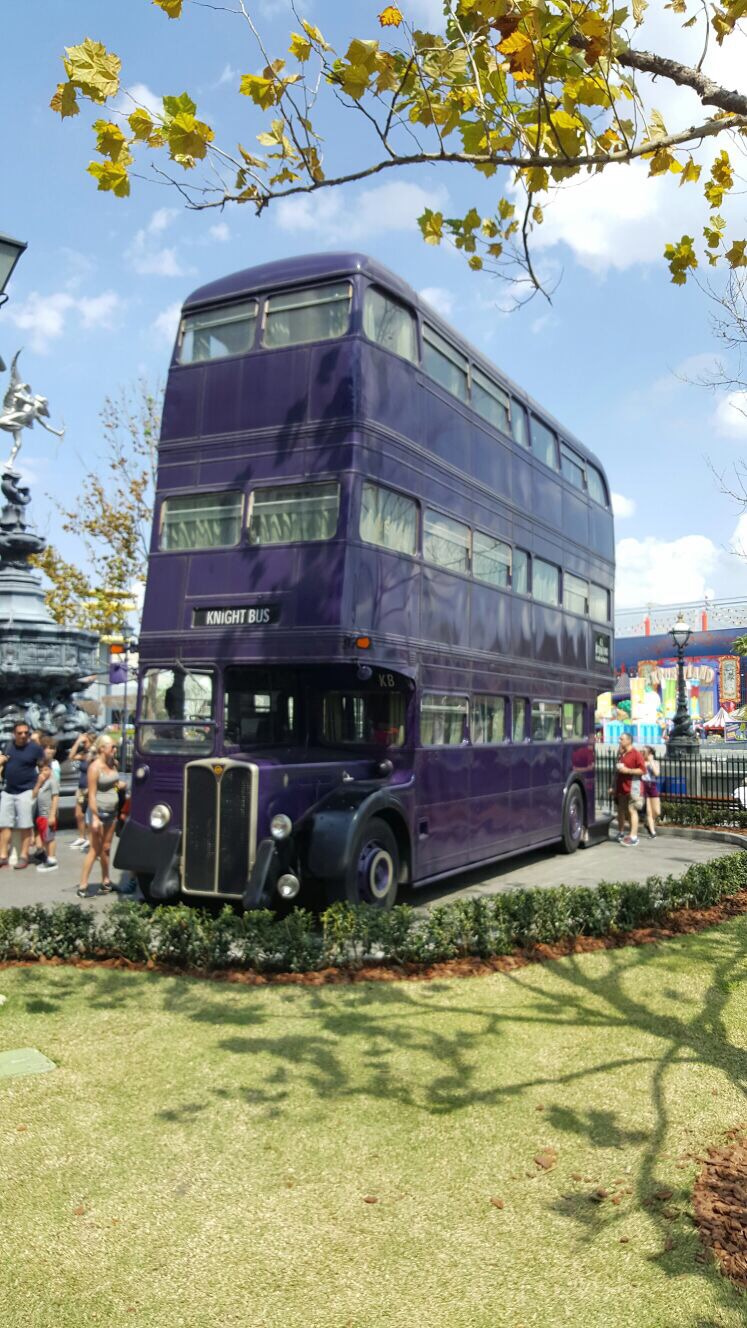 The main ride in the area is the newest ride; Harry Potter and the Escape from Gringotts. Hands down this was my favourite ride of the whole trip – so unique and fun. It is multi-dimensional and it was hard to tell when you were on the rollercoaster part and when you were in the simulator part. Honestly, so good! When you queue for the ride you go through Gringotts bank, as if you’re going  down to a vault. The bank looks just like it did in the movies, from the lights to the flooring – so impressed by it all. 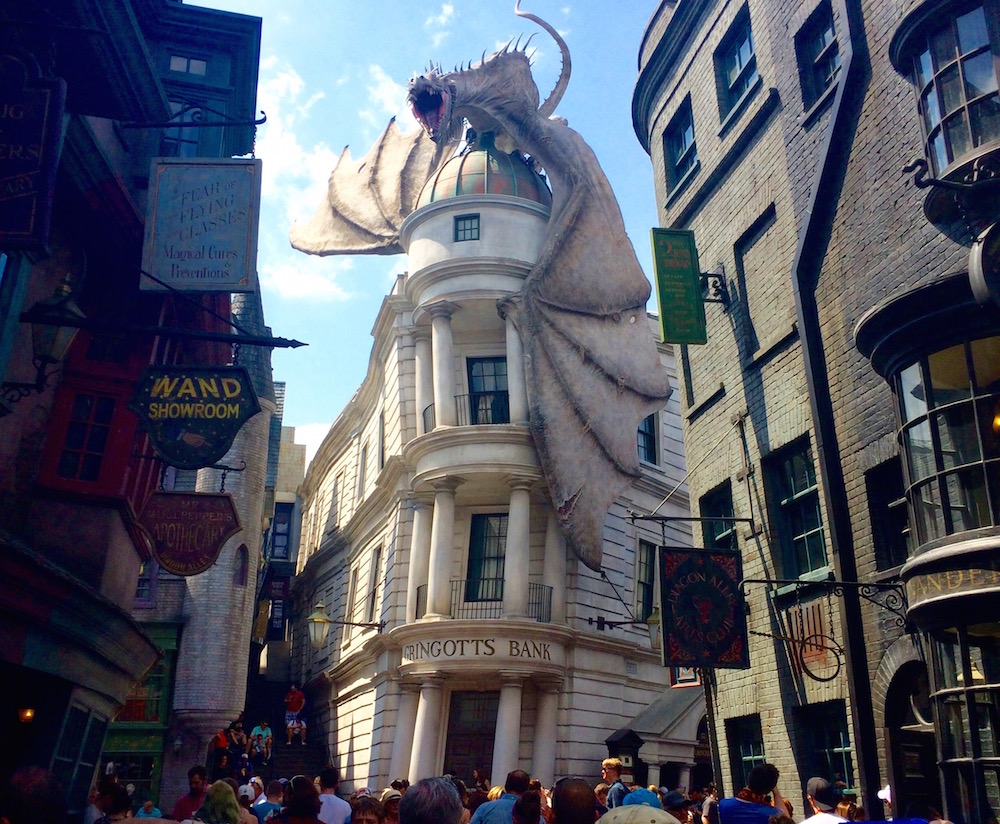 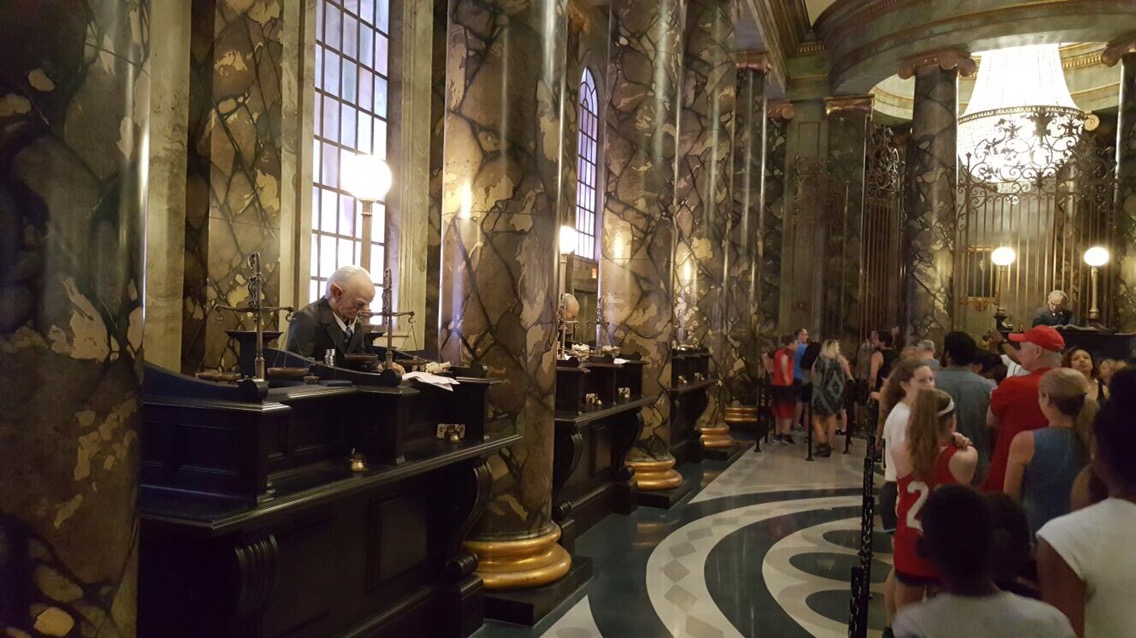 So if you are considering going to Universal Orlando, then I strongly recommend getting a two-park pass so you can experience all of the Harry Potter magic. It is so well done and perfect for Potter-heads as well as those that have only seen the films!

Have you ever been since the new part of Diagon Alley opened?

*Universal Orlando provided our park tickets in exchange for this post, but all opinions and words are my own.