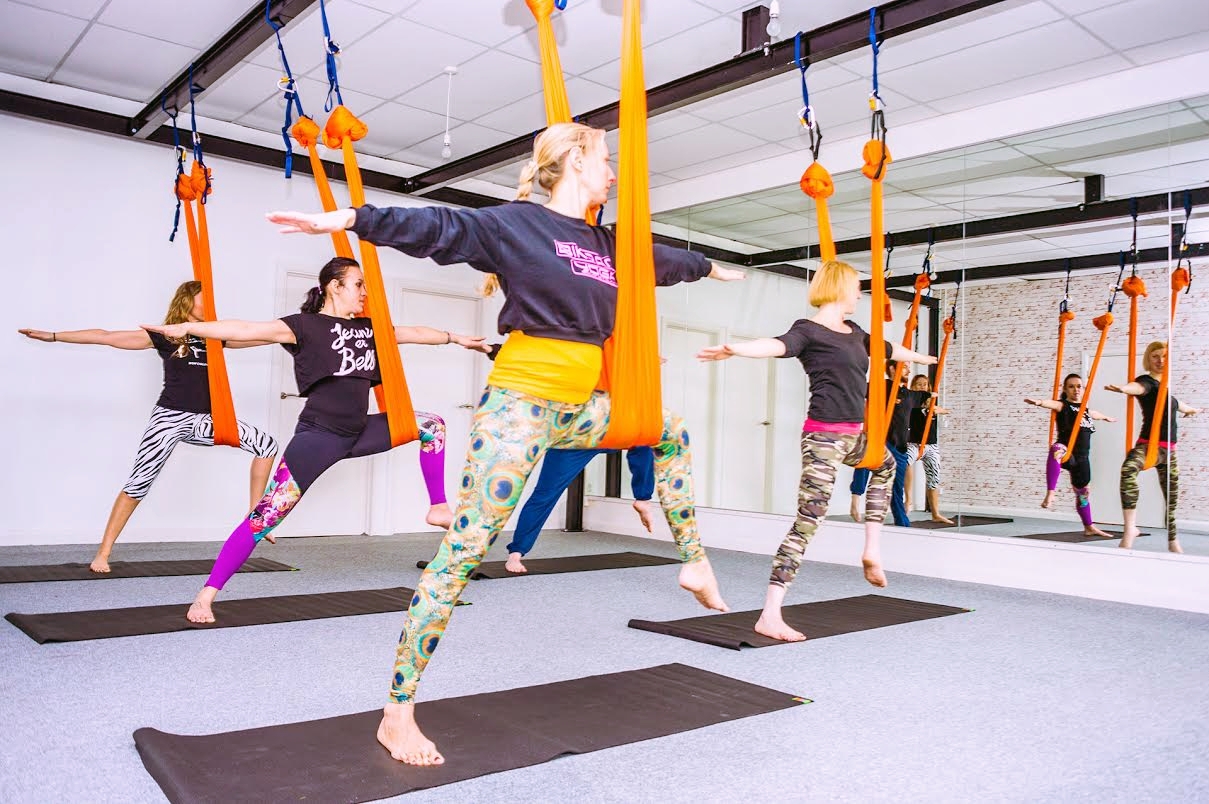 As a busy working parent, there comes a time when I need a time out. Having some time to myself means that I can feel refreshed and rejuvenated, and refocus. Ready to go back and be the best parent that I can be. And I was lucky enough to be invited down to Bournemouth, to review a yoga retreat staycation, with the Urban Beach Hotel and the Yoga Lounge down in Bournemouth.

First of all, this was bucket list kind of stuff. I have wanted to try out a yoga retreat for quite a while. I do yoga fairly regularly, but it has only ever been at my local gym; it is just set up in the studio there. So I have never tried anything like aerial yoga or hot yoga before. So the opportunity to try this kind of thing at the Yoga Lounge was really exciting. Part of the retreat is having unlimited access to as many yoga classes per day at the studio, and any towels or mats included, so that you don’t need to bring your own with you. It could be around four classes that you do during a stay, depending on what days you are there and how long for.

I was just away for one night, and did a class each day that I was there. The classes are at least an hour, though (around an hour and a half), so you do get a really good workout. I was a little intimidated about going to the classes when the retreat had been booked. I just had a vision of all of these regular yogis that have had years or experience. No don’t get me wrong, there were people like that, but it wasn’t an intimidating thing. Their website says that they have a non-judgemental environment and I really felt that. All of the staff at the yoga lounge were really helpful and friendly, they put me completely at ease. Plus, I spoke to a few of the members before the classes and they were all a complete mixture. A few people totally new to it, as well as a few regulars too. So don’t think that you can’t book a yoga retreat if you haven’t done yoga before!

I was so impressed by the skill level of the teachers that I had (I did an aerial yoga class and a hot Fierce Grace yoga class). They were happy to give alternatives, which was very useful as I was very much a beginner at those classes. I found that the aerial yoga was a bit simpler, just because you have the hammock to lean on to support you. But the Fierce Grace was such an experience, I am glad I did it. I would love to be able to get myself into half the shapes that the regulars were doing! It was unlike anything I’ve done before. I would like to do it again, for sure, as it was really relaxing, yet a really good cardio and strength workout at the same time. 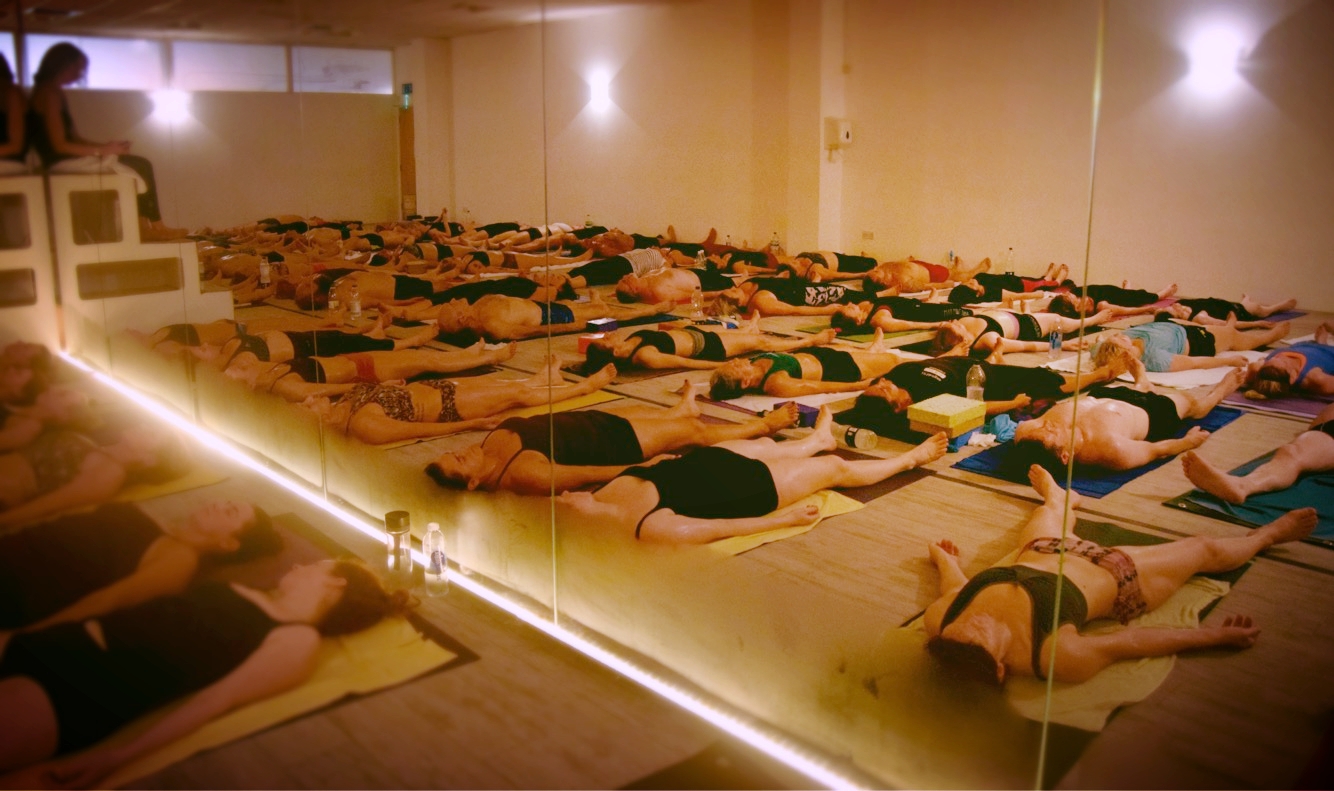 The Fierce Grace discipline is all about switching off and just feeling the movements, and concentrating on your breathing. It took a while to get into it, but the constant direction from the instructor was brilliant. She would say to adjust something or make sure our shoulders were down, for example, and I would feels such a difference! So I did like how the Fierce Grace was a focus on just clearing your mind and listening to your body and your breathing. It was invigorating!

The retreat also included vouchers to eat lunch at the Sukha Lounge, which is located inside the Yoga Lounge itself. The food there was amazing – everything was vegan and refined sugar-free, so it was so nice to not have to read labels or ask for things to be excluded. I’m not vegan, but like to eat dairy-free, and refined sugar-free as much as possible. I liked that it was included as then you don’t have to worry about where to find a supermarket or a restaurant in an area that you don’t know, and when you’re only there for a couple of days.

The Urban Beach Hotel itself is only about a five minute from the Yoga Lounge, which is on the high street of Boscombe (BN7). So it is really easy to get between the yoga lounge and the hotel. Then the opposite direction you are only a quick 10 minute walk from the beach. It really is set in a good location. I took the train and walked from the station (closest one being Pokesdown), though there is parking available at the hotel and in neighbouring streets if required. I was quite glad I got the train though, as I wouldn’t have needed to use my car at all.

My first impressions of the hotel were really good, though I wasn’t sure which was the right door to go through – one is through the restaurant and one is straight into the hotel lobby, but both get you to the right place! The staff were all really friendly and helpful and took me to my room, rather than just giving me a key and telling me go upstairs, like pretty much most other hotels do. So that was a really good first impression for me.

The room itself was really nice. The decor is modern and stylish. I especially loved the bathroom. those sinks! There was everything that you would need, like towels, TV, plug sockets, as well as complimentary hot drinks and water. I thought that the addition of the ‘mini-bar- food snacks was really cute. The bed was comfy and had everything that I needed, as well as complimentary toiletries. I haven’t used the Arran Aromatics for a while, as last time was when my in-laws went to Isle of Arran and brought some back. So I was impressed to see those in the bathroom too. Really nice quality and natural products.

As part of the retreat package, you get to enjoy a meal on one of the night’s that you are there, up to the value of £25. So I did that on the evening that I arrived. As I had some work to do (yes, even when I’m meant to be winding down), the staff brought up my meal up to me. It was so delicious and arrived really quickly! I don’t think that I could fault my stay at the hotel. 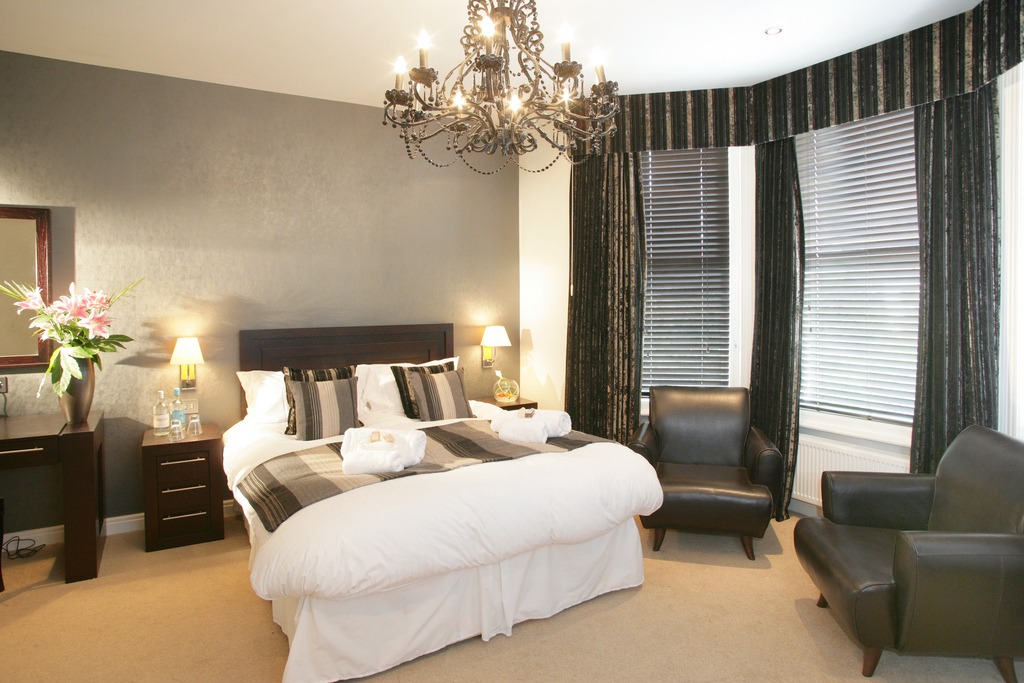 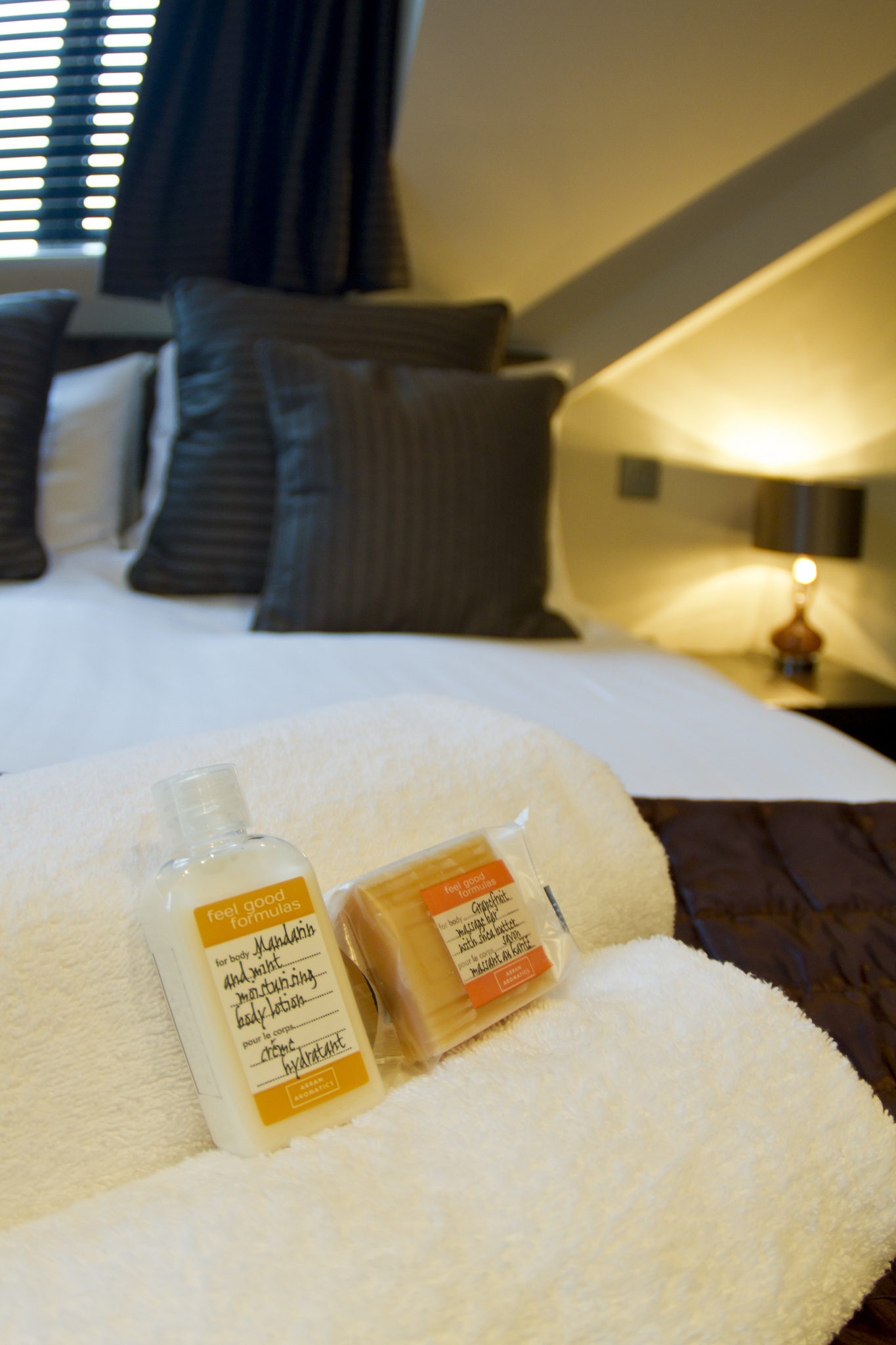 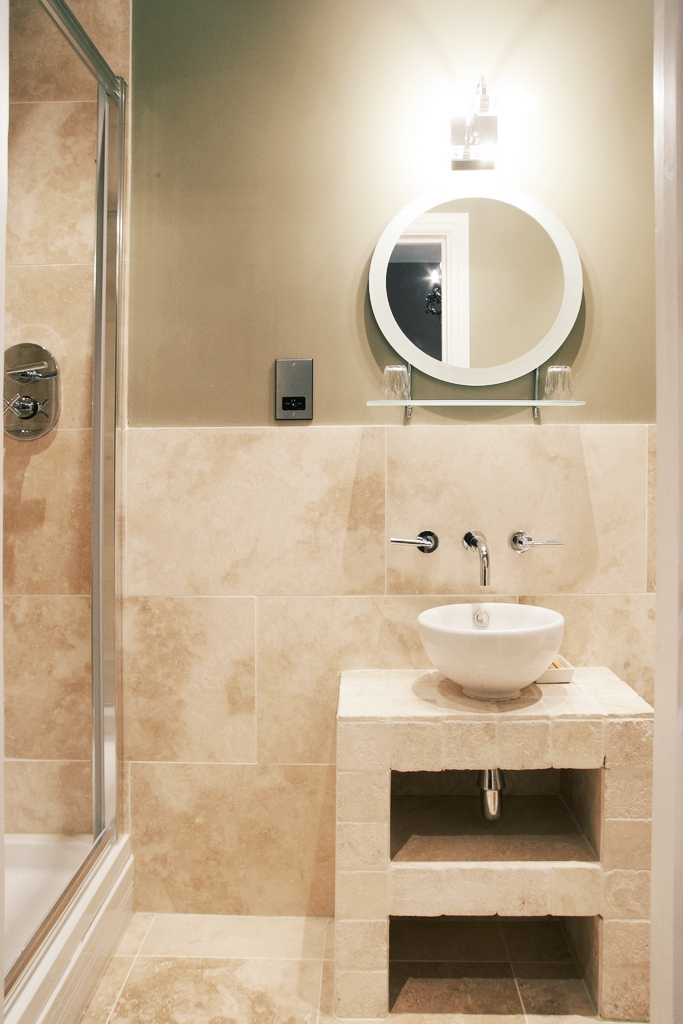 Breakfast was included and there was a tasty range to choose from. The staff were attentive and the food, again, was on my table quickly. So that was a big thumbs up from me.

All in all, as you can probably tell, I had a wonderful time (and it wasn’t just because I was child-free for 24 hours)! The hotel was the perfect place to stay and relax, and the yoga lounge was a brilliant, invigorating but relaxing experience. I only wish I had been able to stay for longer. It has renewed my love of yoga and I wouldn’t hesitate at staying and going the staycation again.

I enjoy my own company, so did have a fine time exploring the area by myself, but for some it might be better with a friend or partner to enjoy it with you too.

The prices for a single room retreat stay, including all that I have mentioned, starts from £210 for a two night stay. So when you think of it as £105 per night, it really is reasonable. You can read more about the retreat package and what it includes here.

*the retreat was offered in exchange for an honest review. All opinions and words are my own.